Investors like the new breed of fashion companies that have an Instagram-fuelled intimate relationship with their customers.

NEW YORK, United States — New York’s startup fashion scene is trending among venture capitalists. Record amounts of funding are being raised, leading to two freshly minted billion-dollar companies in the past two weeks. And there are more waiting in the wings, buoyed by the convergence of online shopping and Instagram.

Glossier Inc., a direct-to-consumer skincare and makeup startup, and Rent the Runway Inc., an online service for borrowing designer fashions and accessories, announced last month that they’ve hit unicorn status after recent funding rounds. Wedding-planning platform Zola Inc. and luxury designer website Moda Operandi Inc. are both currently valued at around $650 million, PitchBook data shows, well ahead of where others have been before a final injection of capital vaulted them across the billion-dollar line.

These new companies are more than just fashion and beauty startups, says Eurie Kim, a partner at Forerunner Ventures. They’re building revolutionary business models that are powered by intimate relationships with consumers. “This is why investors are clamouring to get involved — and this is just the beginning,” Kim says.

The total venture capital investment in fashion and beauty tech startups in New York rose 30 percent last year to hit a record $612 million, according to data from PitchBook. So far this year, the industry has already brought in $349 million, putting it on pace for a new high. New York has been seeing a surge in venture capital in general recently, and has been turning out unicorns in other sectors too, such as mattress startup Casper. Amazon.com Inc.’s recent about-face on opening a new, huge office park in Long Island City was viewed by some as a potential blow to the city’s startup scene, though it hasn’t seemed to had an effect yet, at least on this corner of the market.

New York’s roots as a fashion leader go back decades, from the start of the annual Fashion Week in 1943, to Vogue magazine and the luxury shopping strip of Fifth Avenue that’s home to the likes of local brands Coach and Ralph Lauren. Entrepreneurs have been able to draw on the deep industry knowledge of local world-class designers, pattern makers and beauty specialists, while also tapping into top tech talent that’s been growing in the city. That’s helped spawn seven unicorns in the industry over time, out of a total of 13 across the country, according to PitchBook.

New York’s legends in the fashion and beauty industry, as categorised by PitchBook, include Etsy Inc., which is now an $8.4 billion public company and glasses purveyor Warby Parker, which hit the symbolic billion-dollar status back in 2015. Makeup line Pat McGrath Labs became a unicorn last year. But many other promising startups either got bought before reaching unicorn status or fizzled before making a splashy public market debut. Fashion and beauty subscription pioneer Birchbox sold a majority stake to private equity firm Viking Global last year; men’s clothing startup Bonobos, was acquired by Walmart Inc. in 2017. And the one that started it all, Gilt Groupe, the city’s first fashion unicorn, was valued at more than $1 billion in 2011 with backing from Goldman Sachs and SoftBank Group, only to be sold first to Hudson’s Bay for $250 million and then to Rue La La last year for less than $100 million.

But if Gilt lost some of its lustre, its legend lives on through the many executives and co-founders who went on to build some of the new crop of startups, including Shan-Lyn Ma, the founder of Zola. “We saw the rapid rise and then fall of Gilt,” Ma said. “We learned a great deal about what to do and what not to do.” The startup has tripled its number of employees in the past two years, is gearing up to launch a new website and recently opened its first store, where else but on Fifth Avenue.

What’s also changed this time around is the rapid rise of online shopping and social media that connects companies with their consumers and helps trends go viral. 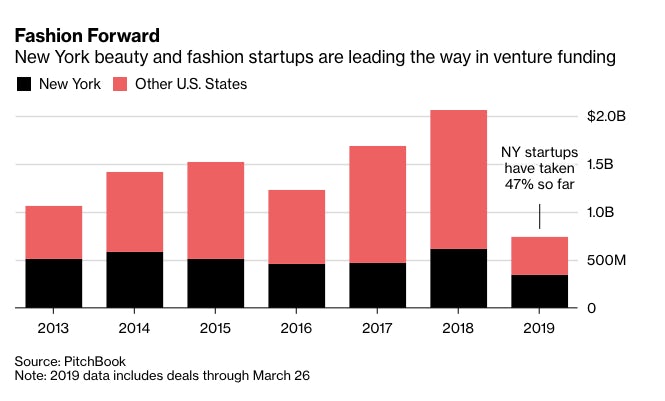 Glossier started out as a beauty blog where it established a loyal following before becoming one of the rare beauty companies that does almost all of its business online. The company promotes its house-brand serums, balms and milky cleansers to some 2 million followers on Instagram where its pages are minimalist and pink and encourage fans to engage with feedback and questions. Rent the Runway’s Instagram feed is an "unlimited closet,’" as one co-founder describes it, with a parade of photos of real people in all shapes and sizes wearing their rented gowns.

A successful social media strategy has allowed the startups to disrupt traditional players who lack a digital footprint, said Scott Friend, a partner at Bain Capital Ventures, which backs Rent the Runway. Friend said the appeal stems from the fact that both companies have a “rabid customer following” giving them a steep competitive edge. “The result is great investor enthusiasm to invest now while these companies are still, remarkably, in the early innings of very, very large markets.”

Glossier founder Emily Weiss says there’s always been significant customer demand for women-focused businesses, but it’s only recently that they’ve seen “meaningful capital investment into categories like beauty.” The long-standing assumption has been that these types of businesses aren’t disruptive or ‘world changing’ enough, despite massive markets and loyal consumers, Weiss said. “As the venture community slowly becomes more diverse and we see new types of success stories, I think this perspective will continue to evolve." Rent the Runway co-founder Jennifer Hyman agreed. “New York City will continue to be a place where disruptive and next-gen fashion and beauty companies get started and grow," she said.

A successful social media strategy has allowed the startups to disrupt traditional players who lack a digital footprint.

Natalie Mackey, chief executive officer of  Winky Lux, said the boom of tech-savvy fashion brands has permanently disrupted the industry. “This new breed of company is nimble, innovative and able to speak to the customer directly,” she said. “Venture continues to lead the charge in backing founders with better and better understanding of how to inspire and galvanise young customers. Incumbents should be terrified by startups that are able to act instantly on feedback.”

The recent success stories are even luring tiny startups like online styling app Wishi away from Silicon Valley and towards the bright lights of midtown Manhattan.

Wishi co-founder Clea O’hana Harroch said the company began relocating to the Big Apple in March because she thinks there’s no better place for a budding fashion and beauty business. “Our goal is to be one of the unicorns and it's really why we want to put all our chances on our side to get there,” she said.