In today's News Bites, John Elliott on the business strategy behind his move to Paris next season, while Prabal Gurung prepares to show Resort in Berlin.

New York Fashion Week: Men’s favourite John Elliott has announced that he will show in Paris next season.

For Los Angeles-based John Elliott, which has shown in New York for the past 10 seasons, the decision forms part of a strategy to take the business to the next level.

"Right now over 90 percent of our wholesale business is with US-based retailers and so going to Paris from our perspective represents a logical next step," says Aaron Lavee, CEO and co-founder of John Elliott. "Some of the best stores around the world are not here although we have some of the best stores as well ... What we found is that a lot of times they just simply don't come to New York. So from a business perspective, this gives us an opportunity to meet them face-to-face and show the collections personally."

Though John Elliott noted the importance of its relationship with the CFDA, and will continue to work with the organisation in other capacities, its absence will be felt at the upcoming New York Fashion Week: Men's shows. While the event was buoyed in January by the presence of Raf Simons and Hugo Boss, and experienced an uptick in international buyers, some young American brands are still finding it necessary to show overseas in order to grow their businesses globally.

US talent including Thom Browne, Virgil Abloh and 3.1 Phillip Lim show overseas, while a wider shift to the fashion calendar is seeing many brands choose to show men's and women's collections together, off-schedule or on the women's schedule.

The energy in Paris for men was unlike anything that I had ever experienced in my life.

For designer John Elliott, the decision to break from New York was not easy. "We have to make a tough choices," he says. "Like, do we stay in a place where we're really comfortable and love and respect and feel like we have great success, or do we try something new?"

"I am very excited to go to this really huge market and in my opinion, the big league of fashion and present ourselves in a very humble way, in a similar way that we went into New York," he says. "We see that there’s a runway for a lot more of what we’ve already built — it’s exciting. The 2.0 version of our business." — Tamara Abraham 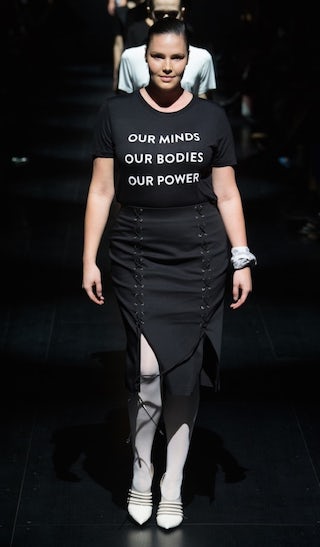 With the support of IMG, the Nepal-born, New York-based designer is embracing the German capital in a bid to expand further in Europe. “Berlin is such a creative and liberal city,” he says. “Given all that is going on in our political and social landscape, here in the US and internationally, it is inspiring to have a city that has overcome so much hate and intolerance come back stronger, as one of the most open-minded places so welcoming to different minorities and subcultures.”

Earlier this year, Gurung announced that his label is newly stocked at London's Selfridges, and says he is keen to explore the European market further. “International expansion is definitely a priority for us,” he added. “We are thrilled to be able to reach the German market now. Selfridges has been an incredibly supportive partner and they believe in our messaging and are actually our exclusive European retail partner for our Fall t-shirts."

The aforementioned t-shirts, which feature slogans such as “This Is What A Feminist Looks Like”, “I Am An Immigrant” and “Nevertheless She Persisted”, caused a stir when they were shown at New York Fashion Week in February as a political comment on the results of the presidential election. “While there certainly are differences across each market, we live in such a global world and society that our messaging and approach internationally follows suit with what we create for the domestic market,” reasoned Gurung. — Osman Ahmed