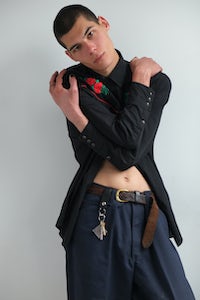 NEW YORK, United States — Next Models Management has announced the launch of a men’s division in New York. A host of new faces are set to join the books, including Raf Simons' muse Tyler Blue Golden and Versace campaign star Jake Lahrman, as well as rappers, musicians and actors.

The move is a practical one, according to Kyle Hagler, president of Next New York. The company already has men's divisions in London, Los Angeles and Miami. "A lot of the boys that were represented by Next [in other regions] were also represented by other entities that weren’t in [our] network," he says. "Whether we scouted them or not, or did amazing things around them, competitors would benefit from the work that we did. Now it’s nice to close the circle."

Increasing need for male models — in part driven by the growth of the men’s grooming market, estimated to be worth $47 billion globally in 2016 by Euromonitor — was another factor. "It’s a very hard market to ignore if you look at the industry in terms of sales," says Hagler.

Renowned modelling agent Gaspard Lukali is leading the division, which will launch with 60 men on the books. The roster reflects the demand for both traditional and unconventional models, from superstar DJ Diplo to online personality Nash Grier and rapper Theophilus London.

“We want to represent men who have an interesting story, not just men who have won the genetic lottery,” says Hagler. “That’s what’s going to be compelling for the consumer and for the brands. Gaspard’s history in supporting diversity and building careers from the ground up...furthers our mission of supporting talents that don’t necessarily fit into one archetype but remain commercially relevant."