The collaboration is Kirkwood's first since his brand was acquired in 2013 by LVMH — the same parent company as Bulgari — and represents an opportunity to expand into accessories beyond footwear.

While the footwear designer is no stranger to such partnerships — he has created shoes for Erdem, Roksanda and Peter Pilotto — this is his first collaboration since his brand was acquired in 2013 by luxury conglomerate LVMH, the same parent company as Bulgari. 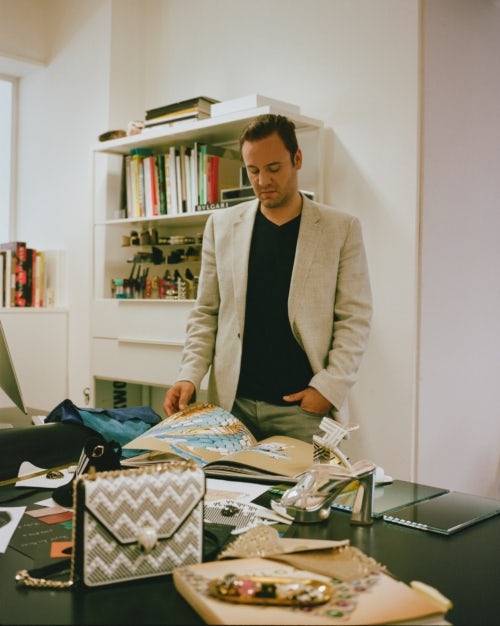 “We’re a very different company than we were before,” says Kirkwood. “The last couple of years we’ve had a lot of reorganisation, and now I’m at the point where I’d like to work on more collaborations... For me, it was [an opportunity] to work on another product.”

The handbags, which will be priced upwards of £1,990 (around $2,600), is inspired by Bulgari's signature "Serpenti Forever" motif. “Although we’re very different kinds of brands, there are a lot of similarities in the codes that we use," he says. “I wanted there to be this slightly more contemporary London feel about the collection, but still execute it in a very Bulgari way."

Kirkwood added that he hopes to explore the possibility of offering more than footwear in the future from his namesake brand.

“I want to be able to expand into other types of products and I think for now the best way of me doing that is through these collaborations. And it’s so much a part of my DNA," he says. “I won’t be doing bags immediately for myself, but it definitely feels like a natural extension."

The capsule will be available starting September 1 at Net-a-Porter, Printemps and Saks Fifth Avenue, as well as Bulgari stores and Nicholas Kirkwood’s flagship London boutique.

Nicholas Kirkwood Launches in Beijing in Next Step of Expansion Plan