Nina Garcia Is Back at Elle: How Much Has Changed?

The new editor-in-chief tells BoF why her return to the title has personal significance, and how she plans to amplify the brand’s core values.

Nina Garcia Is Back at Elle: How Much Has Changed?

The new editor-in-chief tells BoF why her return to the title has personal significance, and how she plans to amplify the brand’s core values.

NEW YORK, United States — For Nina Garcia, Elle magazine is the one that got away. “You know the boyfriend that you are always pining for, [thinking] what would it have been like had I stayed?” she told BoF last week. Garcia was in her office on the 24th floor of Hearst Tower, nearly ten years after she exited the magazine, and about five months since she was named Elle’s editor-in-chief.

The former creative director of Marie Claire is one of several new editors settling in at a new title in 2018, following the departures of some of the industry’s longest-serving leaders last autumn. In this case, Robbie Myers stepped down after editing American Elle for 17 years and cementing it as the fashion publication for the intellectual woman — for whom style is just one of many cultural interests. For her first spring issue, Garcia decided on a bright graphic cover featuring actress and humanitarian Angelina Jolie, in honour of International Women’s Day.

Garcia’s return to the title is particularly significant because the first time she worked at Elle, she was fired. “I don’t presume to know the exact motivations for my dismissal, but it happened at a critical moment of change in the industry,” she wrote in her first letter in the March 2018 issue. The success of Project Runway, the reality show competition on which she has been a judge since its debut in 2004, meant that her departure and subsequent hiring at Marie Claire was closely covered. “I’ll admit, the shift was scary at first — I never sought fame,” she continued. 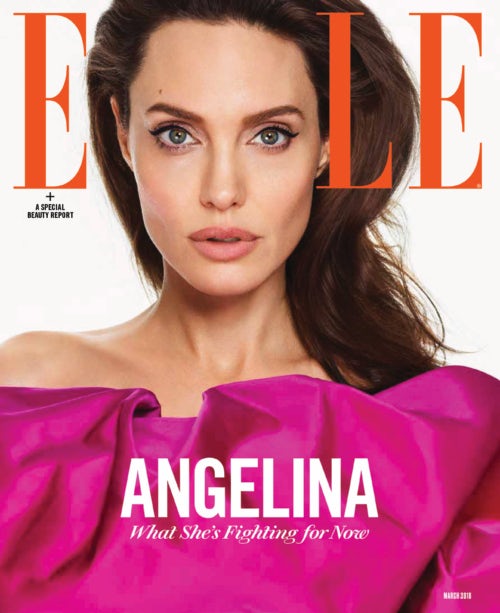 In the following years, Garcia always followed Elle’s history and evolution. (In 2011, Hearst acquired Elle’s parent company Hachette Filipacchi Media.) “I understand the DNA of this brand so thoroughly, I understand its core values.” From her point of view, that DNA is about optimism, inclusion, boldness, joy and showcasing “badass” women who are brave role models. The fashion, meanwhile, has a European sensibility — “It’s not so precious, it’s really about personal style.”

The issue represents not a redesign, but a “refresh,” which Garcia says will continue to expand throughout the year. “There's no struggling here or trying to reinvent the brand…We are very authentic to now. We’ve been [so] for a very long time. We’ve been inclusive all throughout our history.” Garcia has no plans to change that. “I’m here to amplify that, I’m here to bring it back if we have lost any of it.”

She does, however, want to bring more colour and clarity to Elle’s pages. Her first few covers are already a break from the past, which were predominately white and grey. For January, Garcia chose an image of Zoe Kravitz against a bright blue background; for February, Margot Robbie on a beach.

Jolie is a certainly a safer choice for a cover star, but inside she is interviewed by former Secretary of State John Kerry and photographed with her children. “I care that she is a role model and that she’s going the extra mile,” says Garcia.

Garcia’s partner in evolving the visual identity is Stephen Gan, the editor of V magazine and former creative director at Harper’s Bazaar, and her most high-profile hire so far. The position was one of her first priorities at Elle, and one she was thinking about the day after the public announcement of her new title back in September when she sat next to Gan at the Marc Jacobs Spring 2018 show.

“We just started talking and all of a sudden the light bulb went… who knows pop culture and luxury, who has the vision, who can anticipate trends before they happen?” she said, adding that they both felt the magazine was exemplified by an image of a healthy woman running on a beach: sports is an important theme.

Garcia also needed an executive editor with a “good grasp on the journalism part,” and found that in former editorial director of Bloomberg Pursuits Emma Rosenblum and deputy editor Katie Connor, who came from Cosmopolitan. “My biggest goal is to really inspire and give women the right message and the right voices,” says Garcia. Martin Hoops was also hired from Vogue as design director.

While Garcia was mum on the changes still coming to Elle, she explained that she is approaching it as a global brand that exists online and around the world. Hearst’s digital properties are separate from its print titles: Elle.com is lead by Leah Chernikoff, who reports to Hearst Magazines Digital Media senior vice president and editorial director Kate Lewis, and reaches over 8 million unique users per month.

“I’ve got to think of this as a brand that has 46 editions internationally. And it's powerful,” says Garcia. “It’s not really only about print, but how can this be extended and how can that message be communicated and amplified on all platforms? This is the beginning.”

Plus, there is the fact that Garcia, who hails from Colombia, marks the first Latina woman to lead a major American fashion title. “I want to inspire more Latinas to come up,” she said. “It feels good.”

Editor's Note: This article was revised on 8 February 2018. A previous version of this article stated that Leah Chernikoff reports to Hearst Digital Media president Troy Young. That is incorrect. She reports to Kate Lewis.