PARIS, France — “We were noticing this shift in the mid-2000s, where streetwear was dying out and we were looking around and seeing that there was nothing that we were feeling on a higher level either,” says Luke Meier who, with Arnaud Faeh, founded Paris-based luxury menswear label OAMC in 2013. “When you see other luxury brands trying to dip into other things like skateboarding or youth culture, it feels forced and not authentic.”

Identifying a gap in the market for a luxury brand with a more authentic connection to contemporary culture, Meier and Faeh have achieved an annual growth rate of 65 percent over the last three years, successfully attracting consumers whose cultural references come from skate and street culture but are now able to afford luxury goods.

Meier and Faeh gained experience working under some of streetwear's biggest names. On completing his education in Florence, Faeh started working at his uncle's company, Carhartt WIP, in 2006. Within a few years he became the brand's first creative director. Meier, who studied at the Fashion Institute of Technology in New York, climbed the company ladder at Supreme. Starting as a studio assistant to founder James Jebbia in 1999, he quickly worked his way up. “I started interning in the studio and, after Brendon [Babenzien] left, I took over the role of head designer where I worked alongside James for eight years,” says Meier, who now serves as OAMC's creative director while Faeh runs the company's business side.

When you see other luxury brands trying to dip into other things like skateboarding or youth culture, it feels forced and not authentic

OAMC's products are made in the same factories as Valentino, Fendi and Tom Ford, say Meier and Faeh. “We make our products shoulder to shoulder with these brands but our capability is that we can also do something with the reference points of a streetwear brand like Supreme, where there is a real reason why references are used. That speaks directly to our consumer,” explains Meier. 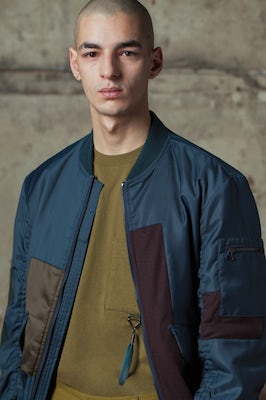 The duo chose to launch with total looks, immediately diving into a wide range of product categories, including graphic t-shirts €150 (about $167), technical outerwear €1,438 (about $1,605) and detailed tailoring €1,444 (about $1,610). “It was easy to have an idea of what each category should look like, but having all categories ready at once was extremely difficult. [It was] necessary for us to explain from the beginning what OAMC is,” explains Faeh.

Today, the label employs eight full-time staff members, who work from its Paris and Milan ateliers, and is available in 100 doors, including influential stockists like Colette, Selfridges and I.T. Hong Kong. “We've refused a lot of points of sales and something I've really learned working with James at Supreme is that it's important to select the right places.”

Looking forward, Meier and Faeh plan to launch e-commerce and eventually open OAMC stores. “Our focus has been on the product and style, though now we've reached that, we want to show the brand in a way that we want,” says Faeh.