LONDON, United Kingdom — Described by the Guardian as a “brutally well-observed wonder, perverse and compelling throughout,” and by Vanity Fair as “ravishing… tailored and expensive but lived-in,” the six-time Oscar nominated director Paul Thomas Anderson brings his auteur’s eye to 1950s London couture in his latest film: Phantom Thread.

Playing his last professional role before retirement, the film stars Daniel Day-Lewis as an enigmatic and disillusioned fictional British couturier Reynolds Woodcock. It is set in the final decade of London’s couture industry, an era which catered to the sumptuous but conservative needs of the city’s wealthy and privileged. The man responsible for costuming the film is Mark Bridges, Oscar winner and long time collaborator of both Day-Lewis and the director. He designed the costumes for 2012’s “The Artist,” as well as Anderson’s “Boogie Nights,” and “There Will Be Blood,” released in 1997 and 2007 respectively.

BoF sits down with Bridges to hear why it was imperative that Day-Lewis felt ownership over the designs of his character, the rigorous attention to detail dictated by a period setting and advice for those seeking to enter the profession today.

BoF: How did you first get involved with the project?

MB: I got involved about a year and a half before we started shooting. I've worked with Paul [Thomas Anderson] for 22 years and have done all of his films, so I see his scripts typically as soon as he’s ready to show them to anyone. He’ll let me into the world of research that he has been looking at and enjoying and being inspired by. He’ll then give me a reading list and a doing list, then we will just sit around and look at pictures, talk and think about how we could do the film.

BoF: How do you undertake research for a project like Phantom Thread?

We were lucky enough to actually go and look at some garments at the V&A museum. I went to the National Portrait Gallery to get an image of what Reynolds might have looked like when he was younger. We looked at photographers of the period, British Vogue in particular and other British fashion magazines from that period. I also looked at films both from Hollywood and England. You end up with a wealth of knowledge, through films, books, search engines on the computer and then you just learn the shapes and silhouettes. Hats were worn a certain way, the shape of the shoes, gloves were always worn, etc. You just immerse yourself in what was happening. 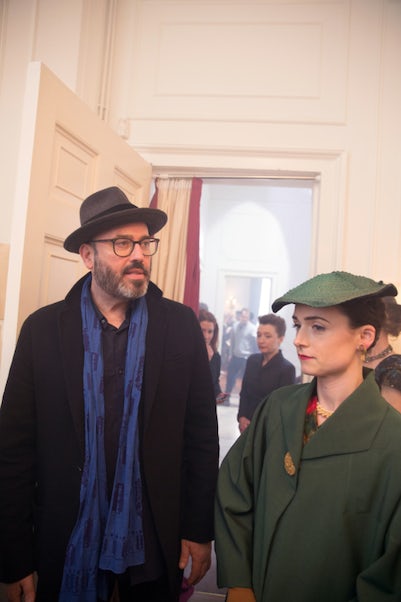 BoF: Did you reference any specific creative legacies?

Not really. The design of the mother’s wedding gown was a very popular influence in fashion right around World War One, around the time Reynolds was making his mother’s wedding dress. That was a real touch point with Lady Duff Gordon, better known as Lucile, but because of legalities and because of how recent it is, we really had to be our own people. There are influences from some, but it’s more in the way a hat was worn or maybe the shape of a shoe.

How important was authenticity?

We really tried to be as authentic as possible and use all of the correct manufacturing techniques. That was part of the gift of going and examining the dresses at the V&A up close. We also closely looked at where we felt Reynolds would fit into the London design scene. The people who were designing there— John Cavanagh, Michael Sherard, Digby Morton, Victor Stiebel, they’re not names that people readily know today the way they know Dior or Balenciaga. I believed Woodcock would have been among those names today. He’s not ground breaking in the way that Balenciaga and Dior both were. It’s slightly earthbound; occasion dressing in the way of this period of English couture.

How many costumes were in the film?

I didn’t really count them. I know we made from scratch close to 50 outfits, whether that be all of Cyril's wardrobe, the fashion show, the clients coming to their fittings, what we made for the clients, the background clothes, the royal gala. We ended up making quite a bit because we wanted to do original clothing for the principles. And then, certainly with Daniel’s clothes, we weren’t going to be able to use vintage clothes because you would never believe that they had just rolled out of the workroom.

How involved was Daniel Day-Lewis?

I often would give him the sample book of satin and ask him to choose the colours of Woodcocks designs, or the lace for the wedding suit. I felt no qualms about it because the man has incredible taste and then he’s also channeling that character too. It helped him in the long run perform the role. I was there to advise and he would always turn around to ask “ is that alright?” and I would say, “I think it’s fantastic!” because I was very open to it. The fabric was narrowed down to what I wanted to use, so the colour scheme was wide open.

BoF: How would you describe your approach to costume design?

MB: At this point in my career, I work by thinking about what is going to photograph the best. Not only in fashion, style and period, but technical aspects affect my choices as well. As a film costume designer, I always try to choose fabrics that have a luminous quality or pick up light somehow. Even when I use velvet, which I typically don’t use, it had a quality of light to it and wasn’t completely dark. Always trying to give an edge to the costume or make them be really photographable no matter what kind of lighting there is.

Then the visual style, with Paul it's a very light touch that doesn’t knock you over the head. I am happy with this film because both the fashion and the world of Reynolds Woodcock remain in the background. It’s the world in which they live, but it never really upstages the story of two people. It plays heavily in their lives, but it doesn’t take you out of that relationship story. It stays in the background to a certain extent.

BoF: What advice would you give those seeking to enter the profession?

MB: There’s an art aspect but there is a practical part to it too. You must maintain an awareness of where you are in the scheme of things. I realise that I am there to tell a story, to tell something about the characters, never to intrude or take out of the moments that are on screen, only to enhance them, to make a beautiful picture and tell a story. Always have your own vision and make it as expressive as possible.