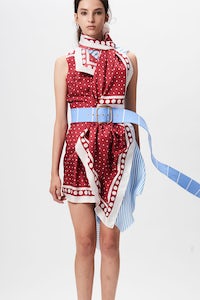 The appointment marks a return to Oscar de la Renta for Kim and Garcia, who departed the company in the spring of 2015 to launch the much-buzzed-about Monse, which has gained editorial, celebrity and commercial steam since its Spring/Summer 2016 debut, with supporters including the stylist Kate Young and red-carpet favorites such as Sarah Jessica Parker and Margot Robbie. Kim spent 12 years working under the legendary designer at the New York-based fashion house, most recently as studio director. Garcia was there for six years, leaving with the title senior designer.

"Laura, Fernando, and I really grew up, as a professional matter, together," Oscar de la Renta chief executive Alex Bolen told BoF. (Bolen is also married to de la Renta's stepdaughter, Eliza Bolen.) "We all had the extraordinary privilege of learning a lot from Oscar. A lot about the fashion world, a lot about business, a lot about life. The culture here at our company remains, I believe, exactly as Oscar intended it," he continued. "We are, all of us, a family. That sort of a culture doesn't work for everybody. Fernando and Laura thrived in that culture and are very much a part of our family and we’re so glad that they’re back."

The designers will be responsible for ready-to-wear, accessories, bridal and children’s collections. Oscar de la Renta will provide operational and logistical support to their nascent label, Monse, which launched for the Spring/Summer 2016 season. "The logistics, accounting, all those back of house things...Alex is being really gracious and offering us that support so that we can focus completely back on design," Garcia said. "Not that we didn't learn a lot. It's just that a year into the game, a year into Monse, we really have a different perspective."

But no matter how much support is given, overseeing two labels can be depleting on a creative level for many designers. Garcia, however, welcomes the challenge. "Exploring a different client is always exciting. Sometimes it's good to tune off the Monse girl in our heads," he said. "Knowing the [ODLR] machine so well means that we’re very comfortable with the people who work there and how they work and what they expect. And it's only a subway away."

Garcia also believes that perhaps the duo would not have been ready for the role before starting Monse. "We needed this experience to understand what it means to take over a brand, not just at a creative level but at another level," he said. "It could be daunting without knowing what it's like to build a brand from the ground up. Monse made us a stronger pair."

Of course, the duo have played the balancing act before. In February, Kim joined long-time Oscar de la Renta friend and competitor Carolina Herrera as senior vice president of design, while Garcia was hired as a consultant, but the arrangement did not feel permanent. While Herrera remained at the helm of the Puig-owned brand, Kim and Garcia's influence could be seen in the Resort 2017 collection. Herrera also recently announced the appointment of another former Oscar de la Renta designer, Raffaele Ilardo, as vice president of design. It seems that the rivalry between the two houses will live on.

Kim and Garcia's first ready-to-wear collection will be for Autumn/Winter 2017.