LONDON, United Kingdom — You’re not imagining it. Winter temperatures are dropping across great swathes of the planet, which, according to scientists, is becoming more common as the Arctic warms to create a “polar vortex.” When the mercury drops, affluent consumers have typically turned to their trusty North Face jacket or a statement piece they purchased from designer labels like Balenciaga or Gucci. But now, there’s new competition from a flurry of emerging labels in the outerwear space, offering innovative designs that are practical, stylish and instantly recognisable.

“There’s been a lot of new outerwear-focused brands [on the market] and we’ve seen luxury retailers stocking [more of] them on a year-on-year basis,” said Nivindya Sharma, director of retail strategy and insights at WGSN. According to data from the trend forecasting agency, Net-a-Porter and MatchesFashion.com have increased their selection of coats and jackets year-on-year by 35 percent and 48 percent, respectively, during the Autumn/Winter 2018 period of July to December.

Analytics firm Edited saw a similar trend. “This spike in [outerwear] is a pattern echoed across Mr Porter, [whose outerwear offering] grew 34 percent, Selfridges by 15 percent and MyTheresa by 14 percent,” said Edited’s retail analyst Rebecca Milne. It is now a sector that is gaining on key categories like handbags: by 2020, the global luxury outerwear market will have grown a yearly average of 2.1 percent since 2016, compared to 2.7 for the global luxury bag market, according to research firm NPD Group. 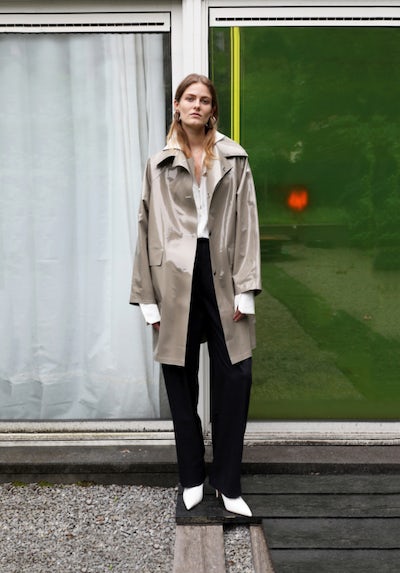 “We’ve seen a huge increase in brands specialising in one particular department. This was originally across bags and shoes, but [brands] have since ventured into ready-to-wear, with new designers focusing on perfecting one type of style or product all year round, rather than a full collection across all categories,” said Tiffany Hsu, fashion buying director at MyTheresa. “The growth of new outerwear-only labels fills this bridge between luxury and practical pieces and gives the customer an additional option.”

But what’s driving this shift? Traditionally, outerwear was an investment piece and was treated as such in fashion magazine spreads. “If there’s one thing you buy that you’ll expect to last for years, it’s a coat,” said Milne. “Outerwear is one of those areas that a consumer would be willing to spend money on, because they think they can get cost-per-wear out of it, like handbags or leather goods,” agreed Sharma. However, she noted, “Unlike the handbag market, which has seen a lot of innovation from big and smaller brands, we [didn’t see] that in the luxury outerwear market.”

In the age of Instagram, however, the psychology behind outerwear has changed. High-end items are still a luxurious commodity, but with consumers posting weekly, daily or even hourly, outerwear is another “way to stand out among a sea of sameness,” said Matt Powell, senior industry advisor at NPD, noting that outerwear grew in the mid-single digits in 2018, making it one of the fastest growing apparel categories.

In other words, outerwear is no longer an exception to the rule that “customers are looking for newness more than ever,” said Hsu. So, which outerwear brands are gaining traction?

The idea for outerwear label Kassl Editions emerged last summer, when Bart Ramakers, founder of independent agency Parrot, which helped launch brands like Vetements and Halpern, saw his friend wearing a vintage fisherman’s coat and was immediately “attracted by its shape, lightness and attitude.” That spurred the launch of the Amsterdam-based brand by Ramakers and four others, including Ilse Cornelissens and Tim van Geloven, co-founders of the Antwerp concept store Graanmarkt13; Charlotte Schreuder, who also works at Parrot; and Christian Salez, former chief executive of luxury-goods maker Delvaux.

If there’s one thing you buy that you’ll expect to last for years, it’s a coat.

“We felt that there was opportunity in the market for lightweight technical coats that are easy to travel in, layer over other pieces and give women and men an attitude,” Cornelissens explained. The result is a range of slick, minimally embellished, water-repellent unisex coats — each with a unique number and stamp on the inside — that could appeal to anyone missing #OldCeline. Made from technical fabrics such as oil cloth and rubber, each coat is produced by a family-run factory in the German city of Kassel, which also supplies the German national fire brigade with clothing. 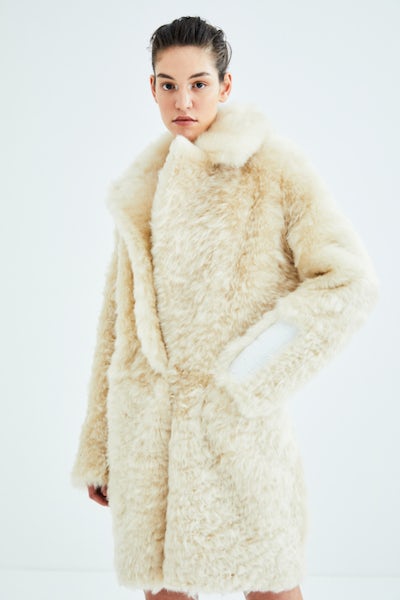 It was Ida Petersson, womenswear buying director at London-based retailer Browns, who spotted Kassl and bought its first collection — a range of short a-line button-down mackintoshes, starting from £890 ($1,166) — for Autumn/Winter 2018. Speaking to BoF, Petersson said she was won over by the brand’s “silhouette and material that feels very relevant to current trends” and that “there was nothing else like it out there.”

For Spring/Summer 2019, Kassl attracted 35 leading stockists worldwide, including Harvey Nichols, La Garconne, Totokaelo, Forty Five Ten and The Modist. And according to Cornelissens, the label has already doubled its number of doors for the following season, starting with a pre-launch for Autumn/Winter 2019 at Net-a-Porter and MatchesFashion.com.

Four years ago in Stockholm, former L'Oréal marketing manager Nellie Kamras launched the contemporary label Stand to meet demand for expertly designed leather outerwear. “My father owned a leather company almost 40 years ago, so [it’s a] business that has always naturally been a big part and presence in my life,” she said. A year after its launch, Stand became the youngest brand to scoop the annual Guldknappen Award, Sweden’s oldest and most prestigious fashion prize. “Since then we have had incredible growth, with almost 100 percent growth each year,” said Kamras.

Today, Stand — which has since expanded to deliver seasonal collections, including outerwear pieces in suede, wool and faux fur — is available at a whopping 550 doors worldwide. For Autumn/Winter 2018, the brand launched at Net-a-Porter, Luisaviaroma, Moda Operandi, Bergdorf Goodman, Intermix, Harvey Nichols and Browns, and for Spring/Summer 2019 moved its show to Copenhagen Fashion Week.

“Stand blew my mind with their fun colour combinations and favourable price points,” said Browns’ Petersson. A short faux fur jacket costs £245 ($320) and a longer faux fur coat costs £385 ($503). “It seems to be everyone’s new favourite brand — in particular, the brown teddy coat, which keeps selling out,” she continued. “I actually had someone chase me down the street in Paris desperate to buy one!” 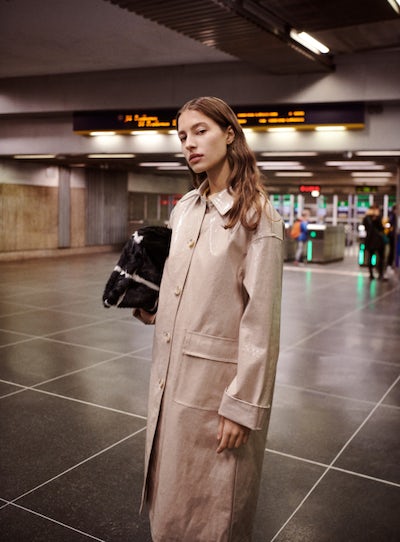 Also pushing the boundaries of fur-free designs is Common Leisure, a contemporary label coveted for its ethical shearling coats. Antalya-born sisters Seda and Hafize Celikturk launched the Istanbul-based brand in 2015 after failing to find anything in the market that was “fluid with regards to gender and age,” Seda explained. As to why she took the leap into fashion design after 12 years in marketing and communications, she said, “To be honest, I was just cold! We are children of the Mediterranean; it’s hard for us to stand the winter [and] I needed something to cuddle me hardcore.”

The brand, which launched globally last year, has attracted a handful stockists — Net-a-Porter, MyTheresa.com, The Icon, Antonioli and Tom Greyhound, to name a few — for Autumn/Winter 2018 and has since been championed by industry insiders like Moda Operandi’s Lisa Aiken and 032c's Marc Goehring to MyTheresa’s Hsu and influencers like Yasmin Sewell and Pernille Teisbaek.

“A modern, androgynous edge” is their key appeal, said Hsu. “It’s been selling incredibly well; highlights from the collection include the brown robes and belted ‘Baby’ style in red and white, and we’re seeing the strongest sales in the UK, US and Germany.” But they don't come cheap: a short shearling jacket on MyTheresa costs $2,624, while a long, belted shearling coat costs $4,336.

Ienki Ienki — pronounced “yenki yenki” — are the makers of the ubiquitous Crayola bright puffer jackets worn by everyone from the likes of models Bella Hadid and Irene Kim to Tank Magazine’s Caroline Issa and Camila Coutinho, the Brazilian Instagram influencer with over 2 million followers. Launched in 2016 by Kiev-based Dmitriy Ievenko, who also co-founded Asthik Group, one of Ukraine’s fastest growing luxury retail companies, Ienki Ienki’s one-of-a-kind colourful goose-down belted puffer coats are instantly recognisable. “With the help of a belt, the slightly clumsy garments are transformed into surprisingly feminine pieces,” he told BoF.

I had someone chase me down the street in Paris desperate to buy [a coat]!

In its first season, the brand, whose jackets begin at around $700 and go up to $1,500, was picked up by over 80 stockists including Selfridges in London. “They have truly championed outerwear that is both practical yet on trend,” said Heather Gramston, buying manager at the British department store. 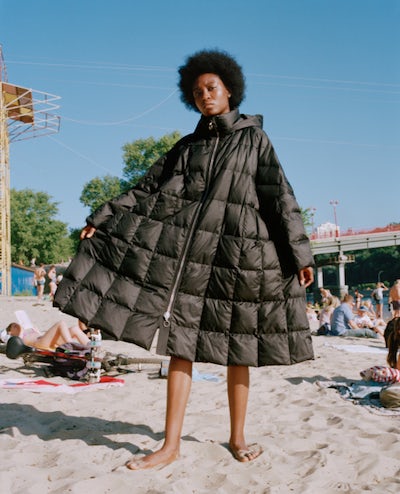 Many more stockists have since come onboard: over the last year, Ienki Ienki doubled its number of wholesale partners and is now present across 30 countries in 315 stores, including Le Bon Marché in Paris, Barneys in New York and Lane Crawford in China. “Our sales have also increased — they’ve tripled over the last year,” said Ievenko. The executive has ambitious plans for Ienki Ienki to be more than a mono-product brand. The label has launched an anorak, available in six colourways, for Spring/Summer 2019 and plans to introduce knitwear for Autumn/Winter 2019.

Yet despite the buzz around these emerging outerwear names, most retailers are not yet cutting back on larger brands in terms of stock or assortment. From July to December 2018, Net-a-Porter stocked 40 options of Gucci and 37 options of Moncler (including designs from its Genius roster), compared to 13 options of Stand and 5 options of Common Leisure, according to data from WGSN.

“It’s more the case that a lot of these retailers are trialling and stocking small assortments of younger brands, to see what the interest is and attract a new customer, but they’re not letting go of the big outerwear brands just yet,” said Sharma. “The luxury outerwear market is growing in general [which means] there’s more space for younger brands, as it gives retailers more confidence."

How to Avoid Becoming a One-Hit Wonder