Off-price shoppers are now responsible for 75 percent of US apparel sales, according to NPD Group. In 2015, average US outlet centre sales reached $546 per square foot, compared to $532 in 2013, according to Value Retail News, the International Council of Shopping Centers’ trade publication. From 2012 to 2016, 41 outlet centres opened in North America and another 57 new outlets or expansions set to open by 2018.

In recent years, brands including Gap, Michael Kors and Hugo Boss — which gains 18 percent of its overall sales from outlets — have expanded their outlet store networks. For the last quarter, Nordstrom’s overall sales fell by 1.4 percent, while sales at Nordstrom Rack climbed 11 percent.

In Europe, the group of nine outlets operated by luxury outlet chain Value Retail have delivered double-digit sales growth every year since the first — Bicester Village — launched in the UK in 1995. Meanwhile, overall retail sales grew an anaemic 1.9 percent in 2015, according to the British Retail Consortium and KPMG.

Most outlet shopping districts are based out of town, away from city centre stores, so they don’t cannibalise full-price sales. Consumers won’t buy full-price goods if they can buy a cheaper product by the same brand in a nearby outlet, so the thinking goes.

“There has always been and continues to be a sensitivity of putting outlets next to full-price stores or wholesale accounts. That has always forced outlets to be away from the big city centres,” explains Adrian Nelson, group leasing and brand development director at McArthurGlen Group, which has 22 designer shopping outlets in Europe, mostly located more than 30 minutes away from major cities.

But despite attempts to move outlet shopping upscale — services at Bicester Village include on-site personal stylists, a VIP lounge and valet parking — outlet districts can feel far removed from a “luxury” shopping experience, with hit-and-miss merchandise and locations that mean they struggle to pull in some consumer demographics, particularly young, urban shoppers who cannot drive out of town. Some brands are also pulling back their presence in outlets, such as Burberry and Coach, which is cutting outlet stores in North America, hurt by a drop in tourist spending.

In the last few years, a small proportion of new outlets have crept closer to cities. In 2013, Fashion Outlets of Chicago opened just 15 miles from downtown Chicago and five minutes from O’Hare airport. In 2014, Assembly Row opened eight miles from downtown Boston, while New Orleans’ Riverwalk launched as the first downtown outlet mall in the US. In the UK, Hackney Walk, a luxury outlet development in East London, opened in 2012, followed by London Designer Outlet, which launched next to Wembley stadium in 2013.

All the research said that the consumer would shop a lot more often in outlets of they were located closer to where they live.

According to Tim Barrett, retailing analyst at Euromonitor, the uptick in urban outlets “co-aligns with the off-price trend” of retailers like TK Maxx and Nordstrom Rack, which are located “more within the normal retail space, within either city centres or shopping malls or suburban shopping centres.”

Barrett says these outlets are moving closer to cities for two reasons. The first is younger consumers, who “are used to paying less for their clothing these days. They like to live closer to the city, so being closer to them and not making them come farther out is the way to get their business.” The second reason is foreign buyers, particularly those from markets like China where convincing knock-off luxury goods are easily available. “They’re not going to be willing to drive 30, 40 minutes outside the city centre,” to buy the real thing — even if it is discounted — he says. (Some out-of-town outlets organise group trips for tourists, such as Bicester Village, which estimates that three out of four Chinese tourists in the UK visit the outlet.) 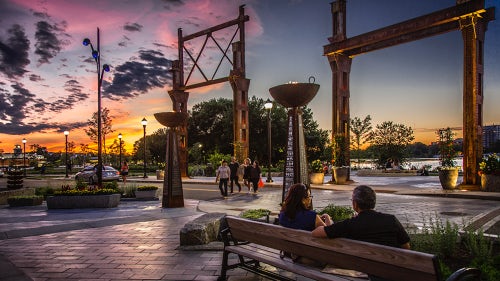 It was this logic that made Federal Realty, a real estate investment trust, locate Assembly Row so close to Boston, where over 2 million people live within a 10-mile radius of the outlet. “All the research that had been done with the outlet brands said that the consumer would shop a lot more often in outlets if they were located closer to where they live,” says Chris Weilminster, executive vice president and president of the mixed-use division at Federal Realty.

“The most important thing is the convenience,” agrees Jack Basrawy, founder of Hackney Walk, which has tenants including Anya Hindmarch, Matches Fashion and Nike. “London has a very large and important population. The market is here and many of them don’t want to travel long distances to buy product.” According to Basrawy, only 8 percent of East London’s population shop in West London, where most full-price luxury stores are based.

But it’s not just convenience. For many luxury brands, outlets are an opportunity to capture a new, entry-level consumer who, they hope, will buy full-price goods in the future. At Value Retail’s outlets, 33 percent of customers purchase from a luxury brand for the first time, and 85 percent say they intend to buy a full-price item from that brand in future, according to a study by the Boston Consulting Group.

Urban outlets are particularly effective at doing this. While out-of-town outlets often focus on lower-end labels like Gap and J Crew, “The closer to the city, the more luxury you have — particularly to get the tourists’ money,” says Euromonitor’s Barrett.

Urban outlets can also help introduce a brand to younger consumers in a local, accessible — and cool — setting, “taking away that feeling that walking into a Bond Street store may not be for them,” says Basrawy. “We don’t have a border — we’re part of a wider community. We wanted to present our luxury brands as part of an urban setting.” The product mix in Hackney Walk’s stores reflects their edgy East London location — featuring Roksanda dresses, or Anya Hindmarch stickers; and rather than the usual Pizza Express or Pret-a-Manger fare, the outlet is next door to Legs, a 24-cover wine bar and restaurant launched by tattooed Australian star chef Magnus Reid; and the stores are lodged under railway arches designed by David Adjaye Studios, the firm behind Proenza Schouler's New York flagship and the Smithsonian National Museum of African American History and Culture.

Some urban outlets are also hosting cultural, fashion-related events, linking up with local creative industries in a way that out-of-town outlets traditionally don’t. Fashion Outlets of Chicago hosts installations by art collective The Arts Initiative, while Hackney Walk puts on talks and workshops on topics like styling and design. Young brands are also invited to temporarily move in to one of the store spaces at the development, “to experience and learn how to retail and sell their product in a supportive environment,” says Basrawy. When finished, the district will also include office space on offer to local creative companies, including fashion brands. “A lot of their employees live in East London, so in terms of convenience, it will be on their doorstep,” he says.

But are these new, urban outlets a threat to full-price stores? “There were quite a few brands that were concerned about its impact both on the full-price store and the wholesale business,” concedes Weilminster of Federal Realty. “Certain brands will not embrace being so close to the full-line stores, but there are many other brands that really see that there’s a core mix of customer that likes to shop from the full-line store and the outlet brand — players such as J Crew, Gap and Nike.”

“In many cases, outlet malls are not owned by the brands themselves and they’re just opportunistic buyers — they’re buying overstock, they’re buying things that can’t be sold, they’re buying also from warehouses,” adds Euromonitor’s Barrett. “They just want to be where they can make most money and where it makes sense for them to get most traffic. And that, increasingly, is the city centres.”

Jack Basrawy of Hackney Walk (which has no brand clashes with nearby Stratford Westfield, the largest shopping centre in Europe) argues that urban outlets can actually help luxury brands retain brand equity and preserve full-price sales. “We feel that some of the stores would like the opportunity to reduce their sale periods in their full-price stores,” he says. “They might be nervous to lose those sales under normal circumstances if the nearest outlet area was an hour away. By having it here, they don’t need to have that anxiety.”

While the model appears to be working so far — Hackney Walk is set to open another nine stores, while Fashion Outlets of Chicago is “looking for opportunities to open more outlets in urban environments,” a spokesperson told BoF — urban outlets face a “constant challenge,” according to Nelson of McArthurGlen Group. “The nearer you go to the population, the more sensitivities you get,” he says. “And if you then can’t get the brands you want, ultimately you don’t get the experience you want to provide to the consumer. There’s a catch-22.”

Does Anyone Expect to Pay Full Price Anymore?

Why Pay Full Price as Outlets Move Closer to Where You Live?