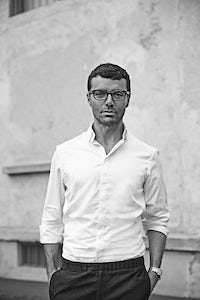 Pal Zileri appoints creative director
Menswear label Pal Zileri has named Rocco Iannone as its new creative director, effective July 3. He joins the brand from Giorgio Armani, where he headed up design for its menswear mainline, special projects and brand endorsements. His first collection for Pal Zileri will debut for the Autumn/Winter 2018 season.

Olivier Saillard leaves Palais Galliera for J.M. Weston
Olivier Saillard has been tapped by J.M. Weston and EPI as its new artistic, image and culture director. In his role, Saillard will oversee men's and women's shoe collections and accessories, in addition to the house image. Saillard, a fashion historian, curator and performer, joins the brand from the Palais Galliera, where he served as director for seven years. In addition to his new directorship, Saillard will continue to develop artistic performances and collaborations for major organisations.

Salvatore Ferragamo names chief executive
Salvatore Ferragamo has appointed Donald Kohler chief executive of the Americas region and chief retail officer of the worldwide group, effective September 4. Kohler joins the Italian label from Burberry, where he served as president Americas at Burberry. Prior to this, he held positions at Gap and Macy’s.

Anne Keating to leave Bloomingdale’s
Bloomingdale’s senior vice president of public relations, special events and corporate philanthropy is stepping down after 29 years at the company, effective July 28. Keating, who was instrumental in broadening the scope of the department store’s charity endeavours, will go on to become an independent consultant specialising in brands and philanthropy.

Joe Zee exits Yahoo Style
Yahoo Style editor-in-chief Joe Zee has announced his departure from the fashion vertical he launched in 2014. Zee, who established his career at W, Allure and Elle before going digital, has become a household name through his television appearances. He departs the platform during a moment of massive change at Yahoo, as an estimated 2,100 people are set to lose their jobs following Verizon’s acquisition of the company.

Rimowa names chief product officer
German luggage company Rimowa has hired Rocky Jacob as chief product officer. Jacob joins the business from Nest, where he served as head of industrial design. Prior to this he held positions at HTC, Ideo and Ident Technology. This marks the second major appointment for the LVMH-owned brand this month, following Hector Muelas’s appointment as chief brand officer.

GQ South Africa hired editor-in-chief
Nkosiyati Khumalo has been named editor-in-chief at GQ South Africa, effective July 1. He will succeed Craig Tyson, who is leaving the title after 13 years at the helm. Khumalo’s promotion from deputy editor, a role he has held since 2013, will also see him tasked with expanding the magazine’s presence through new consumer experiences and products.

Burberry names president Americas
Former Brioni chief executive Gianluca Flore will join Burberry as president Americas region, effective July 5, and will report to Marco Gobbetti who takes the helm as chief executive on the same day. Flore, who exited Brioni last February, has also worked at Bottega Veneta, Fendi and La Perla. He succeeds Donald Kohler, who will depart the business on July 1.