The British fashion label is set to relaunch its menswear collection with a 9-piece capsule collection at MatchesFashion.com.

LONDON, United Kingdom — Levi Palmer and Matthew Harding’s foray into menswear was short lived, but it left a lasting influence on their womenswear designs.

The duo behind the British fashion label Palmer Harding — known for its innovative tailoring and exquisitely crafted shirts — included menswear at launch in 2012, but halted the line three years later. “I wouldn’t say it was a distraction, but we didn’t have enough resources to apply ourselves 100 percent,” Palmer told BoF.

But now, the Central Saint Martins alumni are bringing back menswear, exclusively launching a 9-piece collection at luxury retailer MatchesFashion.com on February 6. The capsule collection will consist only of shirts and range from £285 to £345 (about $369 to $446). 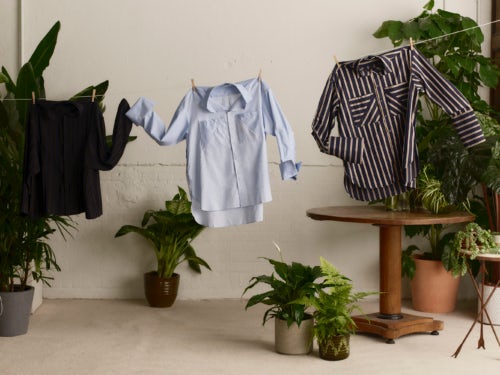 According to Palmer, now was the right time because “I think the whole idea of taking a non-gendered approach to fashion is very topical right now [and] a lot more consumers would be open to things that challenge traditional hyper-masculinity in fashion and [finding] a style that has a … balance between softness and hardness,” he said.

“We’re looking at dressing people like ourselves, people who want a touch of romance in their clothing,” Harding added, on the label's return to menswear. “Our brand has never really been about fashion, it has always been about style and the person who wears it.”

According to the designers, MatchesFashion’s menswear head Damien Paul has also been a big supporter, having seen the duo wearing their own shirts. “It felt like a natural fit given that they are experts in one of the foundations of a man’s wardrobe: the shirt,” Paul told BoF, noting that there has been a loyal fanbase for Palmer Harding since the retailer began stocking the label for Pre-Fall 2016. “They approach design in an unconventional and graphic way. There is room for movement in the garment … a natural fluidity. I am sure the menswear collection will resonate well with [our customers].”

Since co-winning the BFC/Vogue Fashion Fund in 2017, Palmer Harding has grown from a team of five to 18, and saw 137 percent growth in 2017, with a turnover of £2.2 million ($2.6 million), up from £925k the year prior. With 122 stockists worldwide, including Harrods, Harvey Nichols, Liberty, Neiman Marcus, Moda Operandi, Forty Five Ten and Joyce, the duo hope that their menswear will have similar reach in the future.