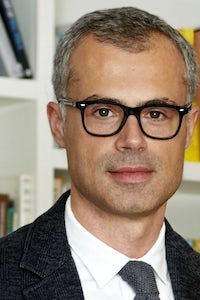 Riva was hired in April 2015 after a multi-year search for the brand's first chief executive. According to sources, the exit was Riva’s decision. The company had no comment regarding immediate plans to replace the executive.

"I would like to thank Paolo for his contribution to DVF. Our business strategy and Jonathan Saunders' vision for the brand remain in place. I am very excited about our future" said Diane von Furstenberg, founder and chairman, in a statement.

Saunders was hired in May as the company’s first-ever chief creative officer, responsible for the overall creative direction of the brand. In 2015, the brand's annual revenues were estimated at $500 million.

When Riva joined from his role as vice president, apparel and visual merchandising for Tory Burch, von Furstenberg told Charlie Rose that the hiring process took longer than expected because she wanted to find "somebody I felt I could give everything that I've done, who could be my heir."

The announcement comes at a pivotal turning point for the company. Saunders' first collection for Spring/Summer 2017 was very well received by editors.

At the Fashion Tech Forum in October, von Furstenberg explained her new role in the company, which remains privately owned. "Ever since Jonathan came in, it was very important to me to think, ‘Okay how am I going to spend the next 10 years of my life and how can I help also the company without annoying them while letting them be free?'" she said.

"If the big umbrella is 'be the woman you want to be', Jonathan and Paolo and the company and the brand will create these wonderful designs, which are tools for women to be the women they want to be. I, by myself, will work with women using my voice and my experience and my wisdom for them to be the women they want to be without having to spend anything. Together, it makes the brand actually very, very valuable and it has a purpose."

Diane von Fürstenberg on Making it as a Woman