The designer is teaming up with Mr Porter to release Off-White's largest collaboration yet.

The designer is teaming up with Mr Porter to release Off-White's largest collaboration yet.

LONDON, United Kingdom — Virgil Abloh and Mr Porter have partnered on Off-White’s largest collaboration to date, an exclusive capsule of 44 pieces that will be available on the e-commerce site on January 21.

It’s a busy month for Abloh, the designer and founder of streetwear label Off-White, one of Mr Porter’s most popular brands. His first collection for Louis Vuitton, where he is the new men’s artistic director, is hitting stores at the end of the month. Last week in New York, Abloh hosted a dinner to celebrate the opening of a pop-up shop in the West Village ahead of the global rollout. And in the coming days, he is presenting Autumn 2018 collections for both Off-White and Louis Vuitton in Paris. 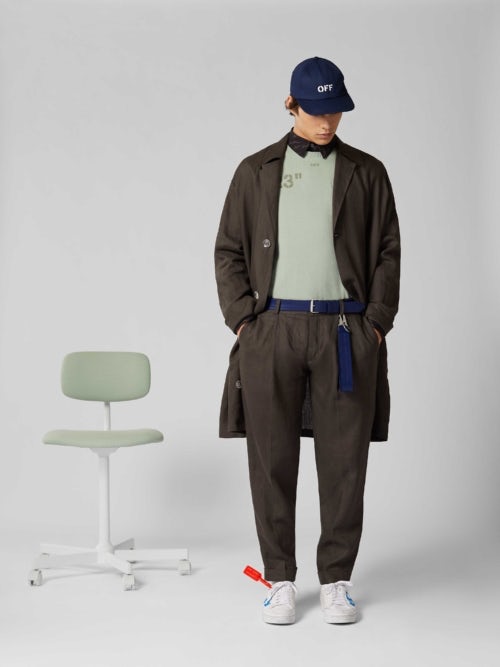 A fast-paced schedule is normal for Abloh, known for his releasing a non-stop slate of collaborations that range from the expected (his series of reimagined icon shoes for Nike dominated the sneaker market last year) to the bizarre (he designed cups and apparel for the New York Instagram friendly matcha cafe Cha Cha Matcha in December).

“I dispel the sort of idea that there is a perfect amount [of collaborations] or restraint is the best way forward,” said Abloh when asked about how he chooses his many partnerships. Many are the result of personal friendships. “The amount of collaborations should near the amount of relationships that I have with either brands or people,” he said.

Abloh also rejected the idea that collaborations are over-saturating the fashion market. “I don’t understand how a peak could be reached,” he said. “Culture moves in stages.” But he can’t predict how his approach to projects might change in the future. “There’s not much value in looking at one small thing…. In my mind, it’s all about — how does it add up?”

Plus, when it comes to fashion in particular, collaborations allow him to tell “smaller stories” that “don’t have legs” for a full ready-to-wear collection. The new capsule with Mr Porter, for example, is an exploration of workwear entitled “Modern Office.” It includes an embroidered, linen trench coat, “Class of 2013” t-shirts and even an iPhone X case, among other apparel and accessories.

Fiona Firth, buying director at Mr Porter, said the e-commerce retailer wanted to collaborate with Abloh’s Off-White to appeal to younger customers eager for new and exclusive streetwear— one of the most active parts of the menswear market.

Mr Porter is sometimes more associated with modern, luxury style than fashion, she said, “but we have a huge business in designer contemporary.” The popularity of Off-White and Balenciaga, both brands that young menswear fashion enthusiasts covet, are examples. “[We want to] put a stamp in Mr Porter and say, ‘Actually, we do sell this product and we sell it really well,’” she said.

“It’s really important to tap into different segments of customers, so obviously the people who are buying Tom Ford and [Brunello] Cucinelli and Lora Piana probably aren’t Off-White customers, and that’s absolutely fine, they will be Vuitton customers,” she said. But she does expect to see Off-White customers buying into Abloh’s new accessories for Louis Vuitton.

“Whether we do exclusives with him or otherwise [in the future], he’s still going to be very relevant to a portion of our customers,” said Firth, adding that Mr Porter will continue to use collaborations in different categories and price points to acquire customers.