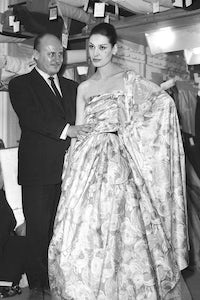 PARIS, France — Up until the 1960s, when fashion became a populist hobby, French couture shows were significant enough to attract philosophers, artists and intellectuals to the front row, who, in turn, treated them as genuine first night experiences as they would an opera or play. Schiaparelli and Chanel attracted world-class luminaries including Stravinsky, Dali, Cocteau and Orson Wells.

At the beginning of his career as an independent designer, Pierre Balmain had the honour of having two highly respected intellectuals, Gertrude Stein and Alice B Toklas, attend his first post-war show. Stein wrote a piece about it called 'From Dark to Day' for Vogue. In it, she talked of meeting Balmain during World War II and her friendship with him and his mother. He used to bring them reels of cotton from Paris to darn their socks and, inevitably, made clothes for them.

As she said in the article: “I suppose at the opening, we were the only ones who had been clothed in all those long years in Pierre Balmain's clothes. We were proud of it… So pleased and proud. Yes, we were…” It is surely true that no tyro couturier has ever had a world–class intellectual and literary figure give his career such a kick-start.

From then on, the name of Balmain was known to everybody in Paris fashion.

Pierre Alexandre Claudius Balmain was born in May 1914, in St Jean de Maurienne, a small alpine village in the Savoie region of France. His mother worked in Galeries Parisiennes, a dress shop managed by his two aunts and owned by the man who would become Pierre’s father: Maurice Balmain — who had already inherited what was deemed a very successful wholesale drapery business.

As a child, Pierre spent a great deal of time at the shop, subconsciously absorbing the idea of fashion by making and dressing paper dolls. Life must have seemed idyllic, but when his father died suddenly, Pierre (then aged seven) and his mother discovered that instead of being rich, they had virtually no money at all. The business had been failing for some time but it was kept secret by his father. One thing that was left was a chest full of theatrical costumes from the days of his father's amateur dramatics and charades. It was to have a huge effect on his son's imaginative development.

In 1925, aged 11, Pierre Balmain won a scholarship to a boarding school in Chambéry — where he took full advantage of the dancing, riding and fencing on offer. At the end of his education, despite his youth, Balmain was already a boulevardier and a man about town. He knew he wanted to work in fashion, but decided to study architecture at École des Beaux-Arts in Paris to appease his mother. As he suspected, studying architecture was not for him, and he soon decided to write to designers asking for a part-time position. He soon had introductions to Lelong, Lanvin and Molyneux — and it was Molyneux who gave him a part time job.

Balmain's time at Molyneux was interrupted in 1936 when he was called up for military service, although he continued to work there until he was demobilised. Balmain was proud of what he learned from Molyneux, whom he later called "this elegant, aloof Englishman who held the fashion world in the palm of his hand during the 1930s."

His next move was to Lucien Lelong, where he gained his first experience of hands-on design. It was at Lelong that Balmain met Christian Dior. The two quickly grew close and Dior became such a support for his fellow couturier that, when Balmain decided to open his own establishment, he asked Dior to go into partnership. Initially, Dior was attracted to the idea; there was much talk and planning but, in the end, Dior decided it would not work. They parted with feelings of betrayal on both sides and hardly saw each other again. It seems an extreme reaction but there was talk that the split signified the break up of a relationship that went beyond business.

The coolness affected both men. With Balmain no longer at his side, Dior became discontented. But Balmain – much the tougher and more driven of the two at this point – could smell success. His first show was held on October 12th, 1945 at his salon in rue Francois 1er. Despite its dark richness with almost sombre colours predominating, it was a great success. Memorably, Toklas wrote of Balmain's first collection in terms that are still apposite to high fashion today: “suddenly there was the awakening to a new understanding of what mode really was: the embellishment and intensification of woman's form and charm.” She might have been talking of Dior's first collection, when the New Look was presented, but that took place a year after Balmain's show of which she wrote.

The photographer, diarist and costumier Cecil Beaton and the artist, illustrator and designer Christian Berard, two of international fashion's greatest gossips, spread the word about 'the new kid in town' and Balmain's career was established. As Balmain rightly wrote in My Years and Seasons, published in English in 1953, “a couture house seldom escapes from the category in which it is initially placed”. And he was lucky to be placed in the first rank simply on the strength of one collection.

On the back of resounding high praise, Balmain was determined to 'go for it.' Eloquent, self confident and persuasive, he charmed people enough to garner a 'treasure chest' of a million francs with which to set up on his own in 1945. However, even with one million francs, Balmain had to borrow 200,000 francs from his mother and sell a one third share of his business for a similar investment from two friends, both of whom withdrew from the deal — leaving Balmain with a much smaller chest.

However, with no small amount of good fortune, the manager of Barclay's Bank in Paris happened to be a friend of Molyneux, Balmain’s previous employer and mentor. Over the course of six years, the bank manager found the right factors, did the right details and, amazingly, six years later,Balmain owned his company outright — precisely at the moment when his business was really taking off. Despite Chanel's rumoured put-down: “Well, provincial women have to dress too,” Balmain’s customer base included both British and American women, and he had strong support from the super-wealthy South Americans. Just as Valentino would 15 years later, Balmain had a 'don't frighten the horses' approach to his customers and, like the Italian designer, he knew what they liked and he gave it to them.

It is a truism that, to garner real publicity, and the wealth it brings, every couturier needs an 'Audrey' moment to cement their career, as Audrey Hepburn did with Hubert de Givenchy. Very few ever have one but Balmain — who throughout his entire career had a knack of being in the right place at the right time — did.

In 1947, on his way back from a promotional tour of Australia, he broke his journey in Bangkok. Once back in Paris, he was contacted by the Thai embassy. Queen Sirikit of Thailand was to tour Europe and the USA with the King. Would Monsieur Balmain return to Bangkok to discuss her wardrobe? It was the beginning of a close association but, rather as Audrey Hepburn did with Givenchy's career, it downgraded Balmain in the eyes of the international fashion cognoscenti. The lookers, talkers and gossips for which Paris is notorious even now, felt that a queen in Bangkok had little to do with French high fashion (although it must be said that she always looked elegant in Balmain’s evening dresses).

But, Balmain wanted to make money rather than waves — he was never interested in developing ideas in the way that Dior, Balenciaga and Yves Saint Laurent were. And, unlike Dior and Balenciaga who kept a sense of distance from even the top customers, barely having social lives at all, Balmain met all the right people and confirmed his status as a society couturier. He had good relationships with actresses he dressed such as Marlene Dietrich, Katharine Hepburn and Sophia Loren, who were always given the very best treatment by Ginette Spanier, the charismatic directrice of his establishment, who was especially valued by everyone. In her autobiography, 'It Isn't All Mink', she describes how she frequently invited clients like Dietrich to her flat and cooked them a good square meal.

As early as 1949 Balmain opened a boutique in New York and two years later, in 1951, he set up a company in the city in order to have ready-to-wear collections, based on his couture presentations, produced by the Elfreda-Fox company. The result is that despite his triumphs — his 1949 Jolie Madame Fragrance, his appointment as a chevalier de la Legion d‘Honneur in 1962, and the fact that he launched Revlon’s first perfume, Miss Balmain in 1966 — Balmain is never mentioned in the same breath as Chanel, Gres, Dior or Balenciaga. In fact, the house was barely mentioned at all for the rest of 20th century, despite the fact that after its sale in 1970, several designers including Erik Mortensen (who was Balmain’s lover), Alastair Blair and Oscar de la Renta took up the helm. As part of his Wool Secretariat Prize, even Karl Lagerfeld worked briefly at Balmain.

Pierre Balmain has a place in the commercial history of French high fashion. Along with Jacques Fath, he was one of the first Paris couturiers to see the potential of the American market. But, at the time of his death in 1982 (aged 68) of liver cancer in the American Hospital in Paris, Balmain was no longer seen as a strong player in the French fashion scene. At that time there were 130 manufacturers worldwide making over 60 products bearing his name, including luggage, jewellery and menswear and, as the name Pierre Cardin proves, too much diversity is not always approved by the taste-makers of the high fashion scene. In fairness, however, it must be said that throughout his careerBalmain’s tailoring and his way with grand evening dresses were of the highest standard of workmanship.

But the last word (or lack thereof) is best coming from the 'no punches pulled' pen of John Fairchild, owner of Women's Wear Daily, who in 1965 chose from the 45 couture houses still functioning, his personal 'Big Six' who had "put a stamp on fashion." It was a list in which the omissions spoke more eloquently than the inclusions.

Despite his fame and financial success, Balmain was left off.

The Future of Fashion Resale