This marks the latest instance of a fashion house using imagery that’s at best tone-deaf, at worst, racist and exploitative. 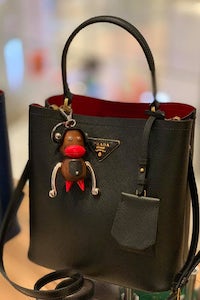 This marks the latest instance of a fashion house using imagery that’s at best tone-deaf, at worst, racist and exploitative.

MILAN, Italy — Prada SpA will stop selling a $550 monkey figurine after social media users in the US called out a strong resemblance to racist caricatures historically used to dehumanise black people.

The monkeys are a part of Prada’s new “Pradamalia” line of small items like keychains and toys featuring cartoon creatures that come in several colors. The black and brown versions have oversized red lips, a traditional hallmark of blackface.

“They are imaginary creatures not intended to have any reference to the real world and certainly not blackface,” the company said in a statement. “Prada Group never had the intention of offending anyone and we abhor all forms of racism and racist imagery. In this interest, we will withdraw all of the characters in question from display and circulation.”

This marks the latest instance of a fashion house using imagery that’s at best tone-deaf, at worst, racist and exploitative. In November, Dolce & Gabbana angered Chinese customers with a video ad campaign that showed a Chinese model struggling to eat spaghetti and pizza with chopsticks.

Swedish apparel chain Hennes & Mauritz AB apologised after it featured a black child modeling a hoodie with the text “Coolest monkey in the jungle.” Some of its South African stores were vandalized and had to be closed temporarily.

The incident comes as Prada tries to plot its comeback. Prada, which is finally emerging from three years of falling profits set off by a slowdown in China and compounded by a failure to recognise that the internet had fundamentally transformed the luxury business, saw sales grow 9 percent in the first half of 2018.