The vision that drives a fashion house is born from the head and heart of the designer. But behind the scenes, an entire Creative Class — from producers to image-makers to makeup artists — help to conjure up the magic of that vision and communicate it to the world. Explore members of fashion's Creative Class on the newly launched BoF 500.

PARIS, France — As artistic director of Christian Dior, Raf Simons reigns over a great pyramid of product categories and visual communications that shape, sustain and signal the brand’s ethos and identity. At the pinnacle of the pyramid is haute couture: elaborate, handmade garments with prices that can soar into six figures. The very term haute couture is protected by French law and membership in its governing body, the Chambre Syndicale de la Haute Couture, is restricted to a handful of fashion houses. To qualify, a house must design custom-made garments for private clients, have an atelier based in Paris that employs at least fifteen full-time people, and present a collection each season comprised of at least thirty looks, with outfits for both day and evening. 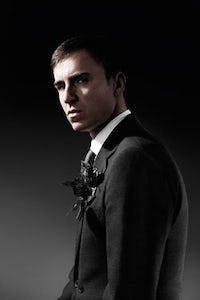 A true modernist, Simons set out to bring a breath of fresh air to this fussed-over art form when he arrived at Christian Dior last year. “My main aim has been to bring a sense of reality back to haute couture. This collection is about focusing on the reality of the woman herself, including her culture and personality.” Fittingly, Simons’ collection for Autumn/Winter 2013 featured pieces clients could mix, match and inflect with their own identities.

It was a vibrant celebration of cultures across four continents: Europe, America, Asia, and Africa. There were sporty stripes and jaunty scarves; bar jackets and cinched- waist dresses; intricate Japanese fabric manipulations; and voluminous silhouettes and beading inspired by the East African Masai tribe. Backstage, four of fashion’s top image-makers put their own spin on the magic with photos and videos that were projected in real-time back onto the walls of the show space.

The vision for the show belonged to Simons, but behind the scenes, a number of formidable creative collaborators — experts in show production, image-making, sound, hair and makeup — helped to develop, execute and conjure up the magic of Simons’ distinctly modern couture.

Show producer Alex de Betak is the man who has transformed fashion shows into immersive, multi-sensory events. From very the start of his collaboration with Raf Simons, he had a clear brief. “One of his first ideas and dreams was, in fact, to do a show where different types of photographers would interpret and reinterpret his vision.” In response, De Betak and his team devised an unusual pyramidal seating plan, right in the middle of the room, allowing every guest a clear view of the imagery projected onto the walls of the show space, as well as a bird’s eye view of the models.

Self-taught makeup artist Pat McGrath is so sought after that some photographers refuse to shoot unless she is on set. This season, McGrath once again demonstrated her eye for colour with metallic-finished lips, shimmering in vampy red and buttery bronze. The models’ eyelids were swiped with iridescent silver shadow, while a dot of glitter brightened the inner corners of their eyes. The all-over shine lent the show a festive air, but McGrath’s light touch and dark palette maintained an aura of mystery and sex appeal.

Guido Palau — who pioneered many of fashion’s recent hair trends, including topknots and braids — is so ubiquitous in the industry that he’s universally known by his first name. The coiffeur kept the hair simple: slicked back into a tight, glossy chignon that rested at the nape of the neck. The wet-look finish matched the sheen of the makeup and gave the models a severe, polished glamour that played well with the mish mash of fabrics and cuts that were sent down the runway.

A killer soundtrack can often set the mood of an entire fashion show production. And sought-after Parisian sound designer Michel Gaubert is fashion’s best known and most talented music selector. His choice for Dior’s Autumn 2013/14 haute couture show was hip-hop golden boy Kanye West, whose aggressive and provocative lyrics might, at first, seem to clash with the elegant gowns that floated down the runway. But Gaubert’s choice was very much in sync with Simons’ overall message of a more modern, universal haute couture.

There was no better choice than decorated fashion photographer Patrick Demarchelier, who co-authored a book on Dior haute couture, to interpret Simons’ Europe-inspired looks. His joyous portrait of ‘les Parisiennes’ shows them clustered nonchalantly against a backdrop of royal purple blooms, all bright white smiles with gloved hands mid-clap. Demarchelier’s renowned ability to put his subjects at ease allowed him to capture them in a genuinely relaxed moment whilst elegantly adorned in classic Diorbar jackets and fishtail gowns.

The exuberance that the provocative fashion photographer Terry Richardson brought to Raf Simons’ African couture woman further advanced one of Simon’s overall goals: liberating couture. In a Richardson signature, the models in his images flash hearty ‘thumbs up’ signs as though to show their support for freedom from the stiff poses often associated with haute couture. Against a bright ochre background of milkweed, the tribal-inspired statement neckpieces and draped dresses said loud and clear that couture was not just for looking at — it was also for wearing and living in.