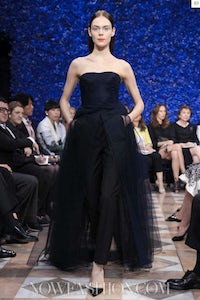 PARIS, France — With fabled fashion innovators Raf Simons and Hedi Slimane scheduled to make their respective ready-to-wear debuts at Dior and Saint Laurent, two of French fashion’s most iconic houses, the stage is set for a historic Paris Fashion Week. And indeed, the conversation amongst editors, buyers and other industry insiders assembling here in the world’s fashion capital is charged with palpable excitement.

BoF spoke to some of fashion’s most respected commentators about their expectations for the upcoming Dior and Saint Laurent shows, the ascendance of Simons and Slimane, and how these two designers will make their mark on the Paris fashion establishment, and beyond.

“These are the young bloods of international fashion and they are rightly named in that they have talent,” said fashion writer and BoF columnist Colin McDowell. “They are also both in a position to recharge fashion simply because of the power that Dior and YSL wield.”

Many in the fashion press have cast Simons and Slimane as rivals. But the designers, who are both 44 years old and started in menswear, can equally be seen as joint leaders of a new guard. “They’re of the same generation; they’re both masters of branding, totally unyielding to their mission and vision and, in some ways, at least, they share similar cultural references,” said Diane Pernet, founder of A Shaded View on Fashion.

Both came to prominence in the new millennium, took inspiration from youth culture and the streets of Berlin, not gilded couture salons, and have been credited with pioneering the skinny, wasted youth silhouette that changed the course of menswear. Some say that it was Simons who first introduced the look, though it was undoubtedly Slimane’s reign at Dior Homme that made it a commercial success, bringing it into the fashion mainstream.

So what to expect from their upcoming womenswear shows at Dior and Saint Laurent?

“My guess is that the era of highly romantic, flowery, girly way of dressing that has dominated fashion for a decade will morph into something much cleaner and perhaps a bit austere,” said Jessica Michault, editor-in-chief of Nowfashion.com, and former online style editor of the International Herald Tribune. “I think that looking forward there will be a real examination about what defines womenswear and menswear. I see a real blurring of lines between the sexes in the near future.”

“[Slimane’s buyers-only Saint Laurent resort presentation] had it very much going back to iconic YSL in the 1970s and that Helmut Newton photograph on rue Aubriot,” said Vanessa Friedman, fashion editor of the Financial Times, referring to the famous photo Helmut Newton shot for French Vogue of a nude woman in stilettos next to another woman in a skinny pantsuit. 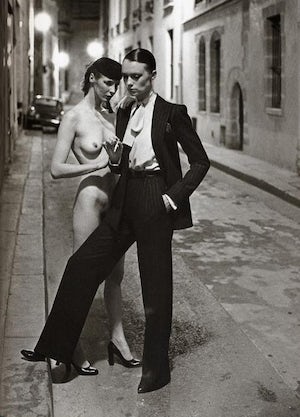 “I think we will see that: very slick trouser suits, silk blouses, maybe some Ossie Clarke references, since he very much influenced Saint Laurent at that time, and colour,” she continued.

“Masculine/feminine,” predicted McDowell, “but I hope more of the second than the first.” Picking up on the androgynous theme, Pernet added: “During his Dior Homme heyday, Hedi always had a selection in the showroom that was essentially menswear but cut for women. I don’t know if he will continue to let this sort of quietly rebellious androgyny play a major role in his womenswear collection for Saint Laurent — I certainly hope so.”

Clues to Slimane’s approach can also be found in recently revealed advertising campaign images shot by the designer himself. “The first was quite stark and featured a musician (Christopher Owens) instead of a model,” observed Michault. “As he has been working primarily as a photographer after leaving Dior, I would count on the collection being visually arresting.”

As for Simons, “my instinct tells me that his take on ready-to-wear won’t be guided too closely by what we saw during couture,” said Pernet, referring to Simons’ first collection for the house, which he presented during haute couture Week in July. 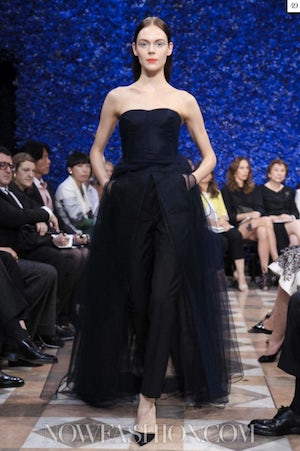 “It was important for Simons to pay homage [to Christian Dior] to a certain extent in the haute couture show, but now my fingers are crossed that we will see more Raf and a little less Christian in the upcoming Dior show,” added Michault.

But for designers at the helm of iconic global fashion houses like Dior and Saint Laurent, consistency, clarity and respect for the brand’s codes and heritage are critical. “A point of view, consistency, and a combination of modernity and tradition that is very cool,” predicted Friedman of Simons' upcoming ready-to-wear collection for Dior. “That’s what we saw at couture and I would expect it to continue. I don’t expect an aesthetic revolution and from what I’ve heard about YSL, ditto — both designers are very respectful of the heritage of their houses without being scared of it.”

Undoubtedly, the upward trajectories of Simons and Slimane constitute a veritable changing of the guard in the Paris fashion establishment. “When two relatively young yet seasoned and successful talents appear on the scene like this, there’s a sense that they could depose the grey-haired masters who have dominated the industry for so many decades,” said Pernet. But innovation at Dior and Saint Laurent is likely to be evolutionary, not revolutionary; built slowly, season after season.

Indeed, the biggest shifts set in motion by Simons and Slimane are tectonic in nature. For a start, Slimane’s decision to move Saint Laurent’s design studio in Los Angeles, where he has lived since 2007, could set a powerful precedent.

“If Hedi is a great success, the fact that he is running the aesthetic side of a Parisian house from Los Angeles will be very significant; it means designers can be across an ocean from the heart of their house, which has never been true before,” said Friedman. What’s more, a design team located in a city outside France may well produce a collection much more in tune with the rhythms of modern life than a team rooted in the rules and regulations of Paris couture and the concept of the chic Parisienne. While not an ocean away, celebrated designer Phoebe Philo moved the Céline design studio from Paris to London, where she has managed to stay true to the codes of the house, while also drawing fresh energy from the city and reinvigorating the brand in the process.

The arrival of Simons and Slimane also represents a fundamental shift in terms of the kind of creative personality and working style we expect from fashion designers, which can, in turn, have a significant impact on how fashion houses function and communicate.

“In the last generation of creative directors, there was an expectation that they be wild and visually creative in their own style — think about Galliano and McQueen — whereas now creative directors are much more normal, for want of a better word,” said Friedman. “Think about Christopher Bailey and Sarah Burton. Raf and Hedi are more in this mould.”

Julien Neuville is an Associate Contributor at The Business of Fashion.