The designer Kerby Jean-Raymond is extending his relationship with Reebok and announcing a new platform for innovative, fashion-forward projects that the sports brand will hopefully bring more relevance to its product offering. 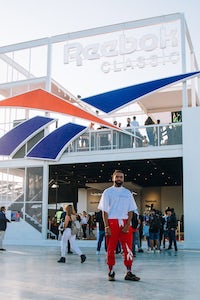 The designer Kerby Jean-Raymond is extending his relationship with Reebok and announcing a new platform for innovative, fashion-forward projects that the sports brand will hopefully bring more relevance to its product offering.

Kerby Jean-Raymond traveled to Dubai to represent Reebok at a streetwear festival there in 2018 | Source: Courtesy
Share
Comment
By Chantal Fernandez July 30, 2019 05:18

NEW YORK, United States — Reebok is extending and amplifying its relationship with the outspoken and award-winning designer Kerby Jean-Raymond of Pyer Moss, after the collaboration became one of the brand’s most important fashion deals of the last two years.

In addition to lengthening his own contract to create sneakers and apparel lines for Reebok, the Adidas-owned sportswear brand is setting up a new creative division that Jean-Raymond will lead as artistic director, bringing in designers and celebrities to collaborate on special projects or products. Partners will also come from within Reebok’s existing slate of endorsers, which currently include Cardi B, Gigi Hadid and Victoria Beckham, and the first projects will debut in 2020.

Jean-Raymond described the new division, called Reebok Studies___ (the blank space will feature the name of each collaborator), as a place to “push ideas forward,” not unlike NikeLab, the rival’s division for experimental, fashion-forward and limited collaborations. It will allow Reebok to “have a pulse on what’s going on in fashion and in music and in activism,” said Jean-Raymond, and allow those creators to “see themselves in the work.”

The new division will make it easier for the Boston-based brand to work with different types of creatives — along the lines of similar collaboration platforms or incubators at other brands, like Moncler Genius and Footlocker’s Greenhouse — and help create a stronger brand identity for Reebok, which has struggled to define itself in today’s competitive athletic market. 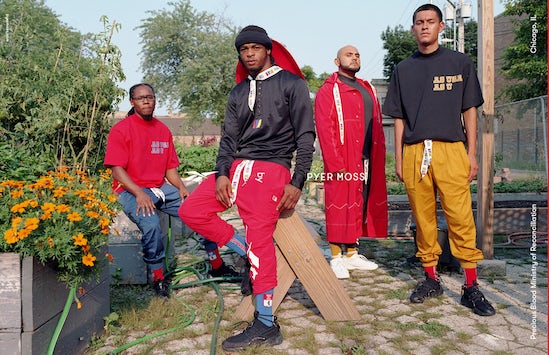 “It really is about future lines, future collections, future potential collaborations, exploring activations, searching for new talent —it’s a space [where] we don’t want to limit creativity,” said Vice President of Creative Direction Karen Reuther. She described Jean-Raymond as a “thought partner” who has influenced the way Reebok thinks about product on a larger scale.

The Boston-based brand is in the midst of a four-year turnaround plan, centred around embracing fashion and trends, re-releasing shoes from its archive and focusing on women. Reebok returned to profitability in 2018, but revenue decreased 6 percent in the first quarter of 2019. Vice President of Marketing Melanie Boulden departed for Coca Cola in June; she was replaced by global digital lead Matt Blonder, who leads both marketing and digital commerce.

In March, Rørsted told investors that Adidas will continue to invest in the brand, which he said needs better products and more relevance to return to growth by 2020. And he told reporters that Reebok is still a priority.

“You love your children equally,” he told Bloomberg.

Reebok’s expanded relationship with Jean-Raymond is a clear way to increase the brand’s relevance. The New York designer started his sportswear line, Pyer Moss in 2013 and burst onto the New York fashion scene in 2014 when he staged a runway show that doubled as an emotional Black Lives Matter protest. He earned a reputation as not being afraid of tackling controversial subjects through his brand, like mental health and wealth disparity.

His relationship with Reebok began in 2017 as just a collaboration on one shoe silhouette, but he pushed to do something more. “I had to go in through the window to open the door,” said Jean-Raymond, saying he wasn’t an obvious choice of a collaborator for Reebok.

Reebok has given him royalties on the sale of his designs, which is unusual in the world of designer collaboration deals — usually, partners are paid a lump sum. 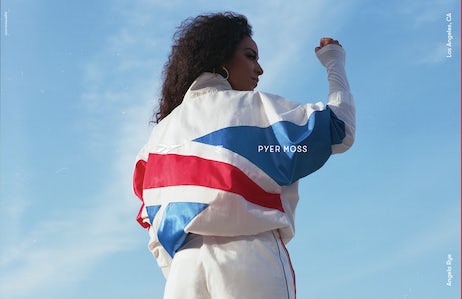 But it was only until after he presented his first collection in partnership with Reebok in February 2018 that Jean-Raymond earned widespread critical recognition for backing up his big ideas with beautifully crafted collections. He topped off a triumphant 2018 by picking up the CFDA/Vogue Fashion Fund award and was later honoured with the Pratt Visionary Award and Collaboration of the Year from Footwear News.

“Kerby’s innate superpower is to keep his finger on the pulse of not just where fashion is going, but he’s connected culturally, he has a passion and a love for performance and what it takes to design for sport and all that means in today’s world,” said Reuther.

Despite fielding offers to work with other brands as a creative director or artist-in-residence over the last year, Jean-Raymond decided to deepen his relationship with Reebok because it will give him the opportunity to “create a lane where I can continue to serve other creatives in the way I always set out to,” he said, adding that he is a frequent visitor to Reebok’s headquarters in Boston.

He wants other creatives to have the same positive experience with the brand, describing his relationship with Reebok as “productive marriage” because “everything is not always perfect, but we want to be with each other so bad so we make it work.”

Now he wants other creatives to have the same experience. “You don’t have to sign your life away for a moment of clout, which is really cool about Reebok.”