The designer, known for his commitment to social justice, is set to launch two separate projects with the athletics brand, one of which will debut during NYFW.

NEW YORK, United States — Amid an attempted turnaround, Reebok is taking cues from parent company Adidas and forging a series of creative collaborations with influencers and designers that speak to specific audiences. So far this year, Reebok has tapped Victoria Beckham to design a new collection and partnered with Ariana Grande, Jonathan Simkhai and musician Teyana Taylor. And in 2016, it signed supermodel Gigi Hadid as an ambassador.

The results have been promising, if not revelatory. Reebok is still growing more slowly than Adidas, with revenue increasing 9 percent year-over-year on a constant currency basis in the first half of 2017, despite a decrease of 9 percent in North American in the same period. The brand represents about 10 percent of Adidas’s overall sales.

To further momentum, Reebok is adding yet another voice into its stable of collaborators: Kerby Jean-Raymond, the founder and designer of New York-based label Pyer Moss, who has a reputation for producing emotional and impactful runway shows that tackle complex subjects, including police brutality and mental health. 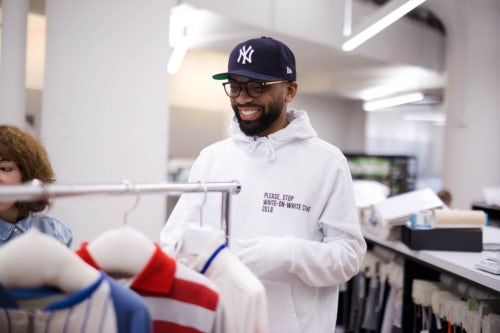 As part of a partnership that will last at least two years, Jean-Raymond will design two collections. A limited-edition, higher-end capsule will debut during New York Fashion Week in February. There will also be a second, more accessibly priced range. Both collections of menswear, womenswear and sneakers will hit stores in August 2018.

“My whole career, all I’ve ever wanted is something like what Yohji [Yamamoto] has at Adidas [with Y-3],” says Jean-Raymond, describing Reebok as a sleeping giant. “Reebok has never done something like this before.” He decided to partner with the Boston-based brand (while weighing another offer from a competitor) not only because it gave him complete creative control over the lines, but also because the company supported his philanthropic and social justice goals. “Where we are, as a voice, is more in line with where they have always been, it’s just that [the] message has been dormant [at Reebok] for awhile,” he says.

Todd Krinsky, general manager of Reebok Classic, says that the brand’s partnership with Pyer Moss is unusual in its focus on apparel rather than shoes, but it continues the brand’s overall efforts to partner with more creatives who can bring a fresh approach to classic Reebok pieces. “This partnership not only signifies our legacy of working with the world’s top designers who challenge convention and trailblaze, but also solidifies Reebok’s commitment to never backing down from pushing boundaries, challenging convention and setting the stage for further design evolution,” says Krinsky.

For Jean-Raymond, the partnership also allows him to separate his sportswear and streetwear offering, the latter of which he is best known for by retailers, and develop his main line of ready-to-wear with more freedom. His last runway show for Autumn 2017 focused on 1980s suiting inspired by Jean-Raymond’s father.

In the last year, the designer bought back complete ownership of Pyer Moss from a former business partner. Instead of hosting a runway show for his Spring 2018 collection, he focused on his contribution to MoMA’s fashion exhibit, “Is Fashion Modern?” — a reinterpretation of Pierre Cardin’s Cosmos collection.