LOS ANGELES, United States — Reformation, the direct-to-consumer brand known for its influential aesthetic as well as its commitment to sustainable manufacturing, has raised a $25 million Series B funding round led by Stripes Group with participation from 14W and  Imaginary Ventures, the new venture capital firm founded by Natalie Massenet and Nick Brown.

Founded in 2009 by chief executive Yael Aflalo, who remains the majority shareholder, Reformation became a vertically integrated direct-to-consumer business in 2012. It has since grown steadily — an average of 60 percent year-over-year since 2014 — with an estimated revenue of just over $100 million in 2017. It raised $12 million in a Series A round in 2015. Today, 80 percent of sales come through the website. 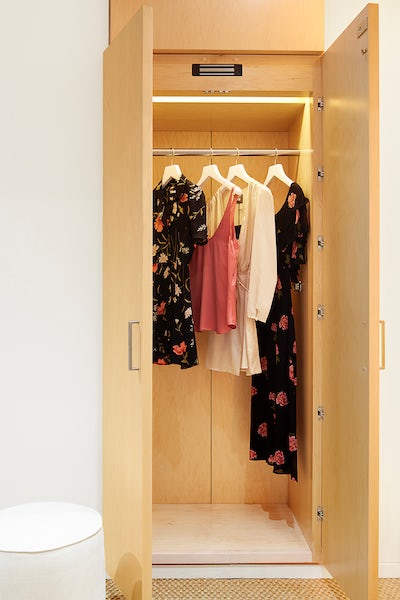 Aflalo plans to use the funding to add more physical retail stores where shoppers can browse samples and select what they want to try on through touchscreen monitors. Product is then brought by sales associates directly to individual dressing rooms, which are larger and more numerous, through double-sided wardrobes. Since adopting this new concept in all but two of its current retail outposts, “we definitely have happier customers,” says Aflalo. According to the executive, net promoter scores, a tool for measuring customer loyalty, are "meaningfully higher" in the new-format stores than in the remaining traditional stores.

The company opened five new-format stores this year in Los Angeles, Dallas, New York and San Francisco and two pop-ups in Miami and the Hamptons and is planning a similar pace for 2018 in major US cities. “With every few stores, we are going to be introducing new features and new operations,” she says. (As of now, she does not have plans to convert the first two New York stores in the Lower East Side and Soho to the new format because they are important revenue drivers and it would require shutting them down for at least a month to renovate.)

The new store formats are also the foundation of a cross-channel approach to sales growth. “One of our big initiatives for next year is ‘buy anything anywhere,’” she says. “And that requires a pretty strong technical foundation.” The biggest hurdle is ensuring each store has not only highly accurate inventory, but that the inventory system accounts for where an item is in the store. A piece in the dressing room or that a client is preparing to purchase, for example, can’t be available to buy online.

Imaginary Ventures’ Brown says Aflalo has proven she can build retail experiences that make shoppers want to come into the store, and are profitable with both new and existing customers. “If you look in the world of physical retail today, there are not a lot of companies that can successfully say that,” he says. “She’s recognised the [retail] evolution and she builds stores that allow the actual experience of trying on product to be a little more unique…. In a way, the back of house has become the front of house.” And Reformation’s release frequency — new product is available as often as every week — keeps customers engaged.

Brown met Aflalo about five years ago when he was a partner at venture capital firm 14W, which invested in a seed round in 2014 and the Series A in 2015, and then joined Reformation’s board. Imaginary Ventures launched earlier this year and is still actively raising funds, but has already invested in HUM Nutrition, Daily Harvest and Heist Tights.

Reformation’s stores are also important for customer acquisition, which can be particularly challenging for direct-to-consumer brands that operate solely in the vast sea of e-commerce where it is because increasingly expensive to target consumers through paid marketing. “A customer that shops online and retail is twice as valuable as a customer that shops only online,” says Aflalo. “We are a little bit unique in the sense that the lion's share of our customer acquisition is organic.” Ten percent of Reformation’s new customers come through paid channels, and while she expects that number to increase in 2018, she says she wants it to remain a significant minority.

In addition to expanding the store count, Aflalo plans to use the funding to continue to invest in manufacturing and sustainability programs at the brand’s Los Angeles factory, where 60 percent of garments are produced. “We have a bigger team there now, researching and investing in new fibers and expanding our compliance processes, making sure we have visibility into where the materials are from,” she says.

Reformation’s commitment to sustainability is foundational to the brand’s identity. “It would be a mistake for us at Imaginary to not understand that consumers today have different expectations in terms of how products are sourced and how they are made,” says Brown.

The brand's clear values and messaging, combined with a distinctive aesthetic, are especially important in an era where private labels account for 20 percent of the US apparel market, together representing more sales than any single brand, according to research firm NPD. Data-aggregating e-retailers, particularly Amazon, and fast-fashion retailers, such as Zara, can undercut Reformation’s growth. (Reformation's prices range across categories from about $30 to $600.)

But Brown says that the"audience of people that are in a position to stay with the brand, to get excited by the brand and to grow with the brand — ultimately, irrespective of what Amazon is doing — is a massive, massive market opportunity."

Brown remembers comments made during Reformation’s earliest stages that it was too cool to be able to scale. “Yael has proven that she can continue to grow and cultivate a brand that people have an association with, that is somewhat limited in terms of distribution, that is constantly reinventing itself from a product angle, but one that can scale and become a meaningfully sized business,” he says. “It’s definitely cult and it’s definitely cool, but it’s not niche.”