If Recreational Equipment Inc. were a publicly traded company, it would be the toast of Wall Street.

KENT, United States — If Recreational Equipment Inc. were a publicly traded company, it would be the toast of Wall Street. Last year, revenue at the outdoor gear and apparel seller surged 10 percent, to $2.2 billion. Sales at stores open more than a year ticked up 4.2 percent.

Of the largest retailers in the U.S., only a handful beat those metrics. L Brands didn’t, nor did Urban Outfitters, Tiffany, Target, Macy’s, or Wal-Mart Stores. Of course, REI shoppers had some extra incentive: They get a chunk of the profits.

One of the hottest retailers in the country — an empire of goose down and Gore-Tex — REI is not a traditional company at all; rather, it’s a cooperative. REI’s spoils are split among 5.5 million members, each of whom paid $20 and in return get a 10 percent dividend for life on purchases of full-priced items, among other benefits. REI mailed its annual dividend payments this week, which meant Twitter was full of posts like this: 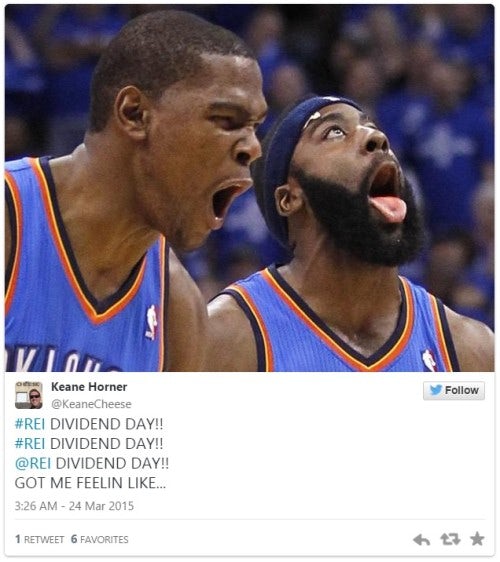 It's a strange and kind of crunchy way to do business, a model that would seem to make more sense in the 1960s or in 1938, when REI was formed. But in an age of increasingly crafty retail tactics — from dynamic pricing to data mining — co-ops are resonating with weary consumers.

“The word I would hone in on is ‘community,’” says REI Chief Executive Officer Jerry Stritzke, who built his career at Victoria’s Secret and later at Coach. “It’s inherently local, and it involves trust. You see a trend of companies trying to tap into that, and the truth is, we’re really the definition of that.”

Other factors gave REI a boost last year. A harsh winter, for one, moved a lot of parkas. And a wide range of REI’s product categories, from yoga pants to fancy sneakers, were suddenly coveted by fashion-conscious consumers keen on the so- called athleisure look.

And while the Web accounts for almost 1 in 4 of REI’s revenue dollars, customers still flock to brick-and-mortar stores for memberships and technical advice on what to buy.

Even among peers, REI is pretty remarkable. By revenue, it’s now slightly larger than two of its publicly traded competitors: Columbia Sportswear and North Face, a brand owned by VF Corp. It casts a shadow over privately held L.L.Bean, which claims annual revenue of about $1.6 billion, and it’s roughly three times the size of Patagonia.

Recently the co-op structure has helped REI become more of a lifestyle brand. With millions of loyal members on its mailing list, the company has started what amounts to a travel agency. Its “Adventures” are one of the fastest-growing areas of REI’s business, as are its outdoor classes, where novices can learn wilderness medicine or how to paddle a kayak. Not surprisingly, Stritzke says the people who sign up for REI outings are the company’s best customers. 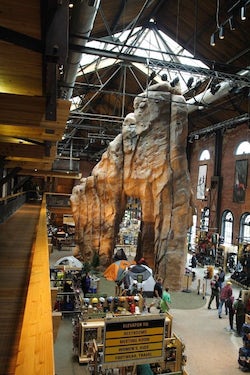 In the fall it introduced an in-house line of apparel, dubbed REI Co-Op. In just 20 days, sales of the products, including motley down coats and mesh trucker hats, topped $1 million.

Of course, growth isn’t really the main goal. As a co-op, REI cares just as much about being a good environmental steward, treating employees well, and making sure its current members are happy. The irony is, that’s the kind of warm, fuzzy corporate filling that’s bringing customers in the door. Almost 1 million people became REI members last year, boosting the ranks by 20 percent.

Shopping these days is a game, an incessant exercise in bartering and brinkmanship driven by data. Consumers frantically mine for the best prices and work to divine when a sale will start or a coupon will hit their in-box. Retailers, meanwhile, spend lavishly to figure out who may be interested in their wares: where they live, what they do for a living, whether they like cat-based Facebook advertising, and how much they’ll be willing to spend.

All of this us-vs.-them pretext vanishes at a cooperative. REI shoppers know they aren’t getting ripped off (the organization’s net margin is 2 percent). Amazon.com, in comparison, has a similar value proposition; both companies will sell you the latest GoPro for $500. REI members, however, will get $50 of that purchase back at the end of the year.

Mike Beall, CEO of the National Cooperative Business Association, says the members-first model is really taking off with young entrepreneurs. Groceries and breweries, in particular, have been fertile ground of late.

“Everyone is coming back to this farmers-market idea,” Beall says. “It doesn’t maximize profits in a way that puts off consumers.” 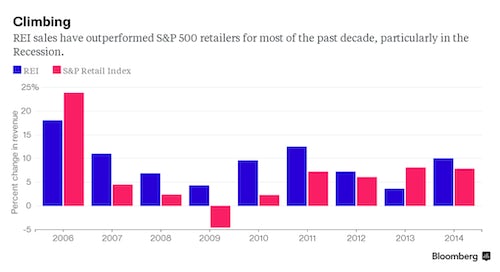 Despite that apparently slanted playing field, Amazon still sells plenty of GoPros, and consumer cooperatives are still a rarity in the U.S., especially when apparel is involved. Of the country’s 100 largest co-ops, most are utilities, credit unions, or farming groups such as Ocean Spray, a collective of berry growers.

Joshua Carreiro, who’s writing a doctorate dissertation on the subject at the University of Massachusetts, says there are a couple of reasons why co-ops haven’t cordoned off a greater swath of the free market. For one, they are somewhat tricky to explain to people.

“As a business model, there are definitely advantages, but there’s an issue with familiarity,” Carreiro says.

And co-ops don’t really want to take over the world, certainly not in the way Wall Street’s retail giants do. Cate Hardy, former vice president for operations at Starbucks, is getting used to the model after just two months as CEO of PCC Natural Markets in Seattle. She says membership at the 10-store co-op spikes when PCC opens a new store, but the organization won’t expand at all unless the growth can shorten commute times for current members or strengthen relationships with farmers and ranchers.

“Starting a co-op is hard, and keeping it going is even harder,” Hardy says. “The good news about that is people feel very close to it.”

What’s proving more successful are traditional companies that somehow mirror the co-op experience. Consider Costco, with its membership fees. Whole Foods does a number of things that seem at odds with profit, such as letting employees vote on benefits and giving low-interest loans to local farmers. Both of those things have been great for business.

“It’s no surprise that [Whole Foods co-CEO John] Mackey has a background in co-ops,” Carreiro says. “There’s a feeling, a vibe to a cooperative. Co-opting that style can be a huge marketing success.”

REI, meanwhile, has 138 stores and is opening more. “We had a great year,” Stritzke says. “We’re having an even better year this year.”