LONDON, United Kingdom — The success of the merger will now depend on the ability of Yoox and Net-a-Porter to successfully and synergistically integrate their businesses, align their teams and create new strategies — or to use the words of Massenet, “create the future of fashion” — something which will still take several years to play out.

Marchetti remains sanguine on the prospects for synergy creation, reporting in November that the estimated €60 million of annual synergies by 2018 originally forecasted by Yoox in March would be closer to €85 million. Part of this will come from the closure of Shoescribe and The Corner, Yoox’s full-price businesses, which will be rolled into Net-a-Porter.

Beyond synergies, communicating the impact of a merger to employees and getting them to buy into the change is always a key factor for long-term success, especially when it comes to retention of key employees, and maintaining a cohesive company culture.

The biggest signal that there might be a cultural mismatch between the two entities came with Massenet’s abrupt resignation in September. In an interview with John Arlidge for The Sunday Times in London just a few weeks later, Marchetti said: “I respect what Natalie has built because I know from Yoox what it takes to do it from scratch. She has been so good and so smart, probably smarter than me. I was really looking forward to working with her. She has a lot of skills that I don’t have.” 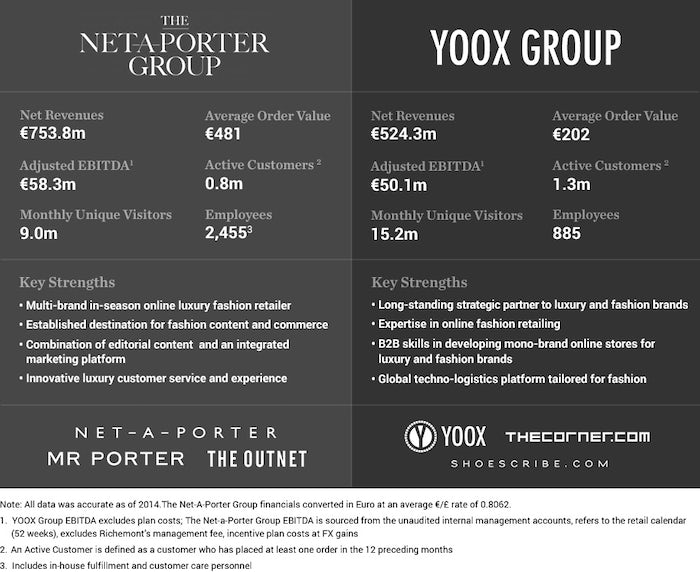 “We did not have a fight. We did not disagree on any specifics,” he adds later, something which has been corroborated by people close to Massenet.

But still, losing Massenet was a major blow and Marchetti has continued to face widespread industry speculation that the cultures of the merged companies are just not compatible. Employees on the inside tell BoF that the post-merger integration has highlighted just how different the two cultures are.

“Every now and then, I continue to read about the cultural differences between the two businesses. 'How will you integrate if you are so different?'” Marchetti asked rhetorically in his speech at the Borsa Italiana listing in October.

“Sincerely, I believe there are more similarities than differences from what I have seen in the last six months,” he said, emphatically, seeming to want to draw a line under the rumours of cultural clashes. “And moreover, I believe strongly in the value of difference. Difference makes us stronger. What will not be present — and I will do everything in order to stop these — are cultural barriers. There will be cultural differences, but there will not be cultural barriers.” 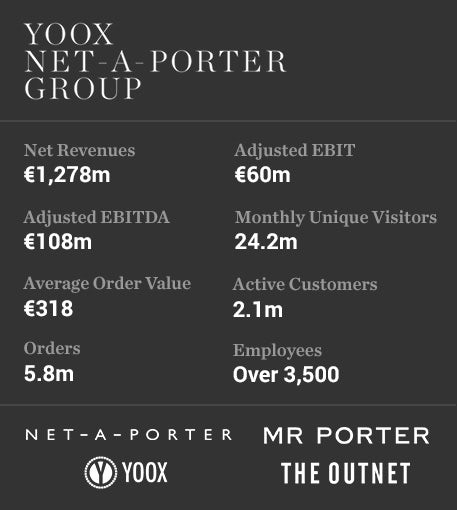 In a report published in November, Flavio Cereda and Ashley Wallace, research analysts at Bank of America Merrill Lynch, agreed: “Given concerns (a red herring in our view) over possible culture clashes following the exit of Massenet we think the key exits have now materialised and probably have more to do with the appointment of Alison Loehnis.”

Loehnis, a long-time Massenet loyalist, was appointed president of the Net-a-Porter Group in October, and is the closest thing to a replacement for Massenet, though PRs for YNAP have been careful not to position her that way, even if the media sees it differently. In December, Loehnis was featured in a high-profile cover story in The Times Magazine, calling her “The New Queen of Fashion.”

In addition to Loehnis, Yoox Net-a-Porter has successfully retained other key Net-a-Porter executives including Naomi Hewitt, now director of people & organisation, and Toby Bateman, who was appointed managing director for Mr Porter. But the company has lost other key executives including Stephanie Phair, formerly president of The Outnet, and Ian Tansley, former managing director of Mr Porter.

While it is unlikely that Tansley would have been appointed to replace Massenet as the titular head and face of the Net-a-Porter Group, the exit of Stephanie Phair has been characterised by several individuals as a very significant loss to the business, possibly due to the fact that she was passed over for the role of president.

But, as Marchetti himself has made clear, he remains the business’s sole leader and decision maker. Some YNAP insiders who spoke to BoF on the condition of anonymity have characterised him as an “absent leader.” For an extended period after the merger was first announced, Marchetti is said to have communicated only through spokespeople, lacking a leadership presence at Net-a-Porter, according to these employees.

However, this issue seems to have been addressed in recent months, as Marchetti participated in live discussions in the Net-a-Porter offices in New York and London at the end of last year with Alison Loehnis. According to one person close to Yoox, since the merger was concluded in October, Marchetti has visited all of YNAP’s locations around the world, giving each of the company’s more-than 3,300 employees the opportunity to interact with him.

Lastly, in addition to a newly merged entity's ability to exploit synergies and combine teams and cultures, the success of mergers must also be measured by whether the management of the newly formed company can build something greater than the sum of its parts. It is here where there are the greatest questions about YNAP’s future.

“Once the integration has taken place, then what? What’s the vision for the business?” asks one YNAP insider, who spoke on condition of anonymity. “That remains unclear.”

“There will be no difference between the English and the Italians, but they will speak a unique language which, in the end, is that of innovation,” Marchetti said to conclude his speech at the Borsa Italiana, somewhat vaguely. “Innovation is the objective of creating the market leader. The leader that is the biggest and best luxury online retailer in the world.”

Indeed, things continue to tick along nicely for YNAP, which recorded record-breaking sales over the Thanksgiving period in late 2015 when the company recorded one order every 1.4 seconds. On Black Friday and Cyber Monday, the company had its highest and second-highest sales days ever, respectively, with Black Friday sales soaring 82 percent compared to the previous year.

As for Natalie Massenet, 2015, a tumultuous year for the entrepreneur, ended on a positive note with an unexpected endorsement from the Queen in her annual year-end honours. Massenet was named a Dame, an honorific noble title in the United Kingdom, typically made on the recommendation of the Prime Minister, and the female equivalent of the honour of a knighthood.

But no one expects this Dame to rest on her laurels. ‘What will Natalie do next?’ was one of the most frequently asked questions within fashion circles as 2015 came to a close. Friends say she is taking it easy for the moment, having been bruised by the conflict with Richemont and Yoox.

Massenet has retained her position as chairman of the British Fashion Council (she was set to step down this month, but the BFC has confirmed to BoF that she has agreed to stay on until the end of 2016). As a globally recognised entrepreneur now without a full-time gig, Massenet has been inundated with other offers, ideas and opportunities, according to friends.

In some quarters, there has been speculation that she could step into Anna Wintour’s shoes at American Vogue, were the editor-in-chief and Condé Nast artistic director ever to step down — but, for Massenet, a technology entrepreneur, working in a traditional media company that is struggling to find its digital feet seems an unlikely step. In that respect, others believe Massenet may become a technology investor, backing entrepreneurs with her newly acquired fortune.

In December, it emerged that Massenet had already set up a new company, registered under the name Imaginary Ventures on 14 October 2015, just days after the Yoox Net-a-Porter merger had officially been consummated. She is the sole director of the company and for now, with only one pound of share capital, it is difficult to ascertain what kind of activity the company might undertake. The inclusion of “ventures” in the name lends credence to the idea that Massenet’s new focus will be on investing in start-up businesses, which is very often the case for successful entrepreneurs after a major payout.

But her use of the word ‘Imaginary” also provides another potential hint to her next steps. In a livestreamed interview with BoF shortly after the Richemont acquisition in 2010, marking Net-a-Porter’s tenth anniversary, Massenet said: “Before starting Net-a-Porter I started reading a book called Creative Visualisation which talked about imagining things and they would happen. Rather than imagining Net-a-Porter, I imagined that I would be involved in a media business. It was a big white space, with lots of light and lots of young people walking around, working, smiling,” she said.

Exactly what she is imagining at the moment remains to be seen. But the industry is waiting with bated breath to see where she goes and if indeed her new venture will involve e-commerce, which is set to grow from roughly 6 percent of the luxury market today to 18 percent in 2025.

As Busquets looks back at the Yoox Net-a-Porter deal, she is characteristically blunt. She still feels better mergers could have been done with businesses that have more aggressive growth plans with an eye to the future. That being said, Busquets says she was never opposed to the idea of a merger with Yoox — only in the way the merger was done. “I have been an investor in Yoox since the early days. Federico is a smart man and he did a good deal and I have always supported the logic of a merger since 2006 when I first introduced Federico to Natalie and Mark [Sebba].”

Still, Busquets feels a more powerful merger would have been with Farfetch, the company founded by José Neves. “Farfetch has modern technology and intelligent solutions, including the ability to do white-label solutions for designers and brands. It can unify all their global inventory and stock in their flagship stores, in department stores, standalone stores and wholesale retailers. I believe this experience and success in the luxury market is impossible to replicate,” she concludes.

Another person close to Net-a-Porter agrees. “What I feel now is there are no innovators who understand the market. Here you have José Neves at Farfetch who really has a vision for how things are going to be. Natalie thought it could be interesting to merge the business with Farfetch. It would have provided a physical retail and an omni-channel strategy. Yoox has no physical retail opportunity.”

As for the ongoing dispute between Richemont and Net-a-Porter’s minority shareholders, this remains in a state of legal limbo.

“We have sought legal advice and now have six years to decide if and how we want to proceed,” says Busquets, leaving open the possibility of a drawn out legal process to seek further compensation for what Busquets and the minority shareholders see as a deliberate under-valuation of the NAPG business by Richemont and its advisors. While it would be something akin to a ‘David & Goliath’ battle, it seems this saga could be far from over.

To read the full story on the Net-a-Porter, Richemont Yoox Saga, click here.