Rick Owens calls his runway shows “a cheap magic act.” But to his audience, they’re the most amazing spectacles in fashion. On assignment for Style.com/Print, Alexander Fury braves the elements to see how he does it.

PARIS, France — Rick Owens’ preferred show venue is a cavernous hall inside a sports stadium in an inconvenient part of Paris. Twenty hours before his Fall runway presentation, he and his close-knit team are there, meeting with Parisian show producers La Mode en Images to hammer out the final staging complexities. The space, within the Palais Omnisports de Paris-Bercy, is a concrete shell — blank, gray, alternately freezing or broiling depending on the season — but it’s a canvas that Owens transforms every six months into one of the most spectacular runway shows in fashion.

In the darkened backstage area, one of Owens’ aides says, “The set, that’s the thing that changes every season,” which implies, erroneously, that the clothes do not. Still, Owens’ style has a consistency that is at odds with the fashion system. There’s something radical about the idea that if you bought a Rick Owens jacket ten years ago when he began showing in Paris, or nearly ten years before that when he started his line in 1994, it could still be worn today. The Owens look is a fashion unto itself.

I love the idea of working with almost nothing — light, air, smoke. Like a cheap magic act.

Conversely, each season his presentation of those consistent ideas veers wildly. “I don’t agonize too much,” says Owens of the set pieces he devises for his shows. “It usually needs to come off the top of my head to feel light and right.” Last Fall, that meant a wall of fire and a Zebra Katz soundtrack; in Spring, a waterfall of foam was the backdrop to a show that resembled a phalanx of Grace Coddington clones clad in the world’s most fabulous shower curtains. This season, Owens has moved on to wind. And smoke — lots of smoke, blasted through a quintet of giant fans.

Owens’ runway productions are grand — an elemental proscenium arch through which he can show his clothes — and he has been realizing these feats with La Mode en Images since
his Paris debut in 2003. For this show they built a barrage of industrial fans to vomit smoke across the stage, and a vacuum on the other side to control it, creating a living wall of moving mist. They also devised Spring’s foam (one of the proudest achievements in Owens’ entire career, he says), and more straightforward setups such as the deafening sound system at a memorable show in the Palais de Chaillot (“It’s a gay disco!” screamed designer Gareth Pugh, above the thudding bass, at that one). “I didn’t really explore playing with scenography until recent years,” says Owens. “At first I had too much to learn about presenting clothes, period, let alone get fancy about it.” 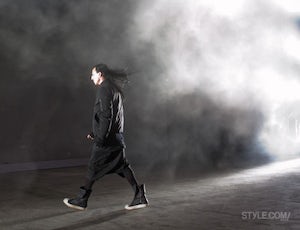 That’s typical self-deprecation from Owens — on the one hand, he describes these shows as “simply monumental, eternal, and primal.” But lest that sound pretentious, he quickly deflates the hot air: “Big and dumb, that’s kind of my motto.” The affect is very American, or so it strikes you, sat in the icy cold of the hall, watching Owens listen to the hubbub of Gallic voices around him (the designer speaks no French). Clad in baggy shorts and high-top sneakers, snapping the spectacle with his iPhone, he almost seems the quintessential American tourist. And then, all of a sudden, his surroundings are transmogrified: The smoke looks like the twister closing in on Dorothy Gale’s shack in The Wizard of Oz. The effect smacks of Metro-Goldwyn-Mayer, or P. T. Barnum. “I love the idea of working with almost nothing — light, air, smoke. Like a cheap magic act,” says Owens: It’s a line that could have been uttered by Barnum himself.

Back from Oz to Bercy: Morgane Denis of La Mode en Images walks through the smoke while her team adjusts the fans. Her shoulder-length hair is whipped around her face — a minor detail you might expect when marching through gale-force wind. And while most designers would fight that, or choreograph their show to avoid it, Owens seems to revel in it. An idea is born.

At the show the next day, Owens’ models are windswept with wild abandon by the time they hit the photographers’ pen—the designer’s elaboration on that accidental moment when Denis’ hair was caught in his white squall. On the runway, the combination of the wind and Luigi Murenu’s dandelion-head hairdos completely transforms the look of the show. “I like suggesting something transformative, like walking through a wall of light or being assaulted by a blast of wind—an experience changing you into something more than you were,” says Owens. “I wanted the girls to emerge through adversity in a heroic way,” he adds. “When you play Wagner” — naturally, the soundtrack to the show — “in your head, I think this is how it feels. If you’re going to drag people to a show,” he says with a grin, “do a show.”

After the show, Denis talks about her company’s part in the proceedings. “The relationship we have with every designer is very different,” she says. “With Rick, our role is more technical than anything else. He has a very specific vision, and our work is to give him the means to express that.” Comme un couturier? The way a seamstress helps a designer to create the garment in their mind? Not really, she replies: There are no sketches, no techniques. Just those abstract concepts—smoke, foam, fire — and these amazing shows.

This article appears in the latest issue of Style.com/Print.