NEW YORK, United States — On a sunny Thursday afternoon in late August, a 15-block stretch of what used to be among the world’s most coveted retail real estate is nearly deserted. More than 40 storefronts were shuttered along Madison Avenue between 57th Street and 72nd Street. Out on the sidewalk, among the few scattered pedestrians, not a single shopping bag was in sight. All the while, on the south end of the corridor, a looming bankruptcy could lead to the most significant store closure of all — the 60th Street Barneys flagship store, arguably the avenue’s best-known institution.

The ritzy Upper East Side corridor is still struggling to emerge from a tumultuous decade that saw the value of the properties along Madison Avenue soar to dizzying heights, even as the nationwide chains and luxury department stores that occupied the bottom floors of those buildings faced sluggish sales and new competition. The neighborhood’s retail rents doubled from $800 per square foot in 2010 to $1,771 per square foot in 2014, according to CBRE, a real estate brokerage. Brands looking to reduce their brick-and-mortar footprint in the face of stiff online competition saw their Madison Avenue flagships as easy cuts, including Calvin Klein and Anya Hindmarch.

As tenants moved out, rents have fallen unrelentingly over the last five years, to $1,042 per square foot today. But the brands haven’t come back, even as other beleaguered retail districts like Meatpacking and Greenwich Village’s Bleecker Street have rebounded. Shuttered stores on Madison include Sonia Rykiel, Frances Valentine, Donna Karan New York, Proenza Schouler, men’s footwear brand Louis Leeman and a number of jewellers.

Earlier this year, Cushman & Wakefield found that landlords along those 15 blocks had cut their asking price by more than one-quarter over the previous year — and vacancy rates barely budged.

Madison Avenue’s challenge, according to brokers, is a confluence of stubborn landlords, oversupply and rents that still need adjusting lower. For the neighbourhood to return to form, landlords and tenants alike must also adapt to the prevailing trends in retail: smaller stores driven by food, entertainment and other experiences. They must also face the reality that few brands have the sales and cultural clout to successfully operate a multi-story flagship these days. 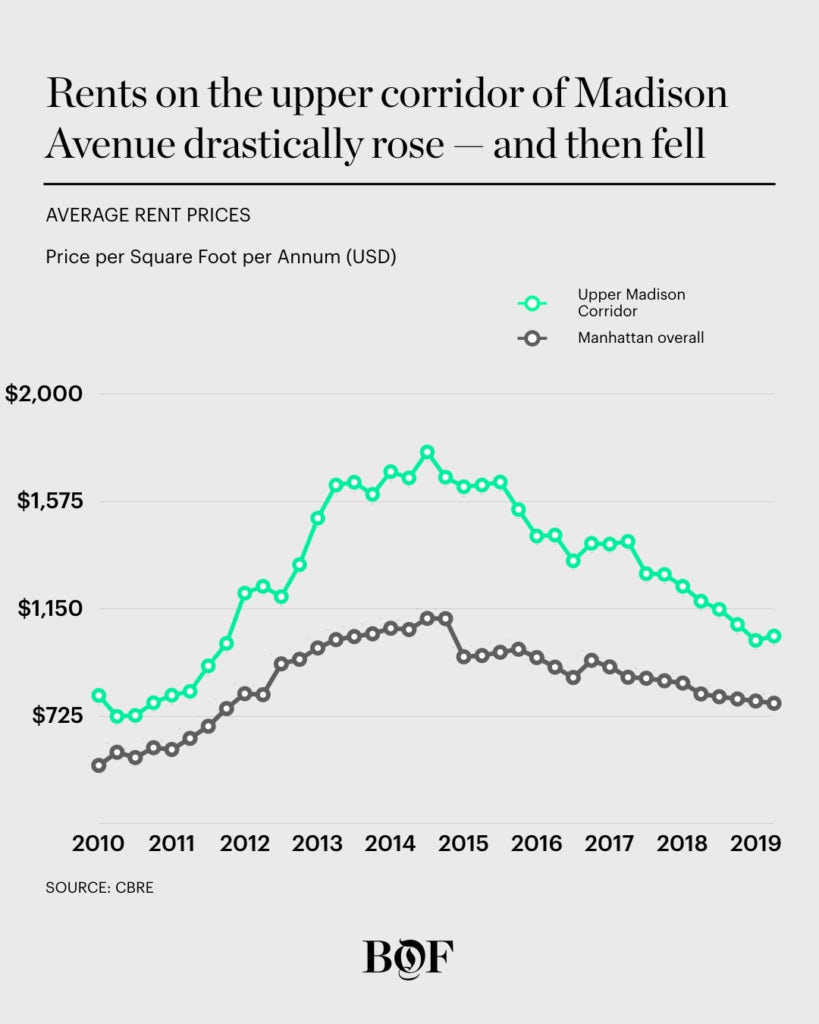 Still, property owners that bought their buildings in more flush times are still holding out for tenants rich enough to shell out premium rents on huge space. Instead of waiting for the next Calvin Klein or Proenza Schouler, landlords must divide big storefronts into smaller ones, or convert them to other uses, such as offices or condominiums, industry sources say.

“To see a real change there needs to be a reimagining of the avenue,” said Corey Shuster, a broker on the Faith Consolo team at Douglas Elliman. “People have a great reason to go always, but if you look at Soho and Meatpacking and every hot successful retail corridor, the biggest thing there is a true mix of users — that being entertainment, experience, food and retail all working together to bolster an area.”

Madison Avenue isn’t a lost cause. Most luxury brands have stuck around; Hermès is moving into a bigger space close to its current 62nd Street location, and both Celine and Balenciaga moved to the southern end of the corridor with neighbouring storefronts on the 59th Street and 60th Street blocks.

“There’s still a very exclusive feel to Madison Avenue, all the expensive apartments and a European feel,” said Steven Soutendijk, executive managing director of Cushman & Wakefield. “All of that isn’t going away.”

Upscale online reseller The RealReal picked Madison Avenue for its wealthy residents, many of whom are the brand’s most active consigners. Marketing materials for current vacant spaces say the average household income in the proximity of Madison Avenue reaches upwards of $200,000.

The RealReal's new two-story space in the corridor uses an unconventional format: the store portion is kept small but the second level houses what the brand calls its luxury consignment office, where neighbourhood sellers can bring in pieces and get an expert valuation on the spot.

“It bridges the gap between LCOs and our flagship stores, bringing together expanded expert services and a curated selection of luxury goods,” Michael Groffenberger, The RealReal’s head of retail, said in an email.

Consumers accustomed to shopping online want more than just racks of clothes or cases of jewellery. New retail developments like Hudson Yards on Manhattan’s West Side or Palisades Village in Los Angeles County invited in high-end restaurants, entertainment venues and other attractions to liven up endless stretches of luxury boutiques.

Engineering that mix is particularly difficult on Madison Avenue, however. Even at today’s reduced rents, the street is too pricey for most restaurants. An upscale coffeehouse, for example, would typically pay $120 per square foot, said Jay Luchs, a broker with Newmark Knight Frank. Madison Avenue's current restaurant options include French and Italian fine dining — a stark contrast from the buzzy restaurants shoppers flock to downtown.

Ultimately, there simply may be too much space available. Storefronts were built decades ago, when the department store was the ultimate in retail innovation. New stores today tend to be smaller. This means that current unoccupied stores could be leased for other functions, such as offices, non-retail businesses and residential units.

There are already examples of this type of repurposing on Madison Avenue. On the 65th Street block, Giorgio Armani is teaming up with its landlord SL Green to redevelop the label’s flagship into a retail storefront with 19 luxury condos above, to be designed by Armani himself. Over on 5th Avenue, co-working startup WeWork took over the top floors of Lord & Taylor’s flagship. That didn’t save the department store, which later closed entirely, but it means much of the former retail space is still occupied.

“Real estate is always dynamic enough to evolve to fit toward its best use, and its best use might not be retail,” said David LaPierre, Vice Chairman with the Global Retail Services team at CBRE. “There was a time, pre-big box [retail], where the second floors were all commercial or residential, and then there was a time when retail became more valuable. That evolution today could theoretically go back.”

Madison Avenue landlords also need to consider the type of retailer they want to attract, according to Luchs. Rather than attempting to replace a stale retailer with another one of its ageing cohorts, they should go for unconventional names that could attract new types of shoppers, such as streetwear.

“Off-White is an example of a tenant that’s popular today even when retail is getting weird. Kith is also an incredible brand at the forefront of retail,” Luchs said. Off-White’s only New York store is in Soho currently, while Kith has a presence in both Soho and Prospect Heights, Brooklyn.

Luchs is leasing a space at 694 Madison — formerly watch retailer Jacob & Co. — and is hoping to secure a streetwear brand, he said. Already, he added, the landlord is open to the idea of starting out with a pop-up and that would lead to a long-term deal if it performs well.

The LA-based Newmark broker pointed to Louis Vuitton’s pop-up exhibit on Rodeo Drive in Beverly Hills this summer as an example of a new retail concept that drives traffic. “It’s temporary but I’ve never seen that sort of traffic,” he said. “A museum-type deal would certainly be interesting.”

Meanwhile downtown, Soho landlords have already been making the most out of their vacancies with pop-up after pop-up.

Streetwear has yet to infiltrate Madison Avenue. But so far this year, the corridor welcomed a handful of new tenants, including budding contemporary labels like La Ligne at 996 Madison, Zimmermann at 900, and Anine Bring at 838.

Lafayette 148 just opened its doors at 956 Madison, where it hosted its Spring Summer 2020 collection preview this week. According to its president, Liz Fraser, the brand had its eyes on this neighbourhood for years, waiting for the right opportunity.

“Our biggest customers are in these two zip codes,” she said on the opening day of the store — a modern space with oak fixtures decked out in cashmere and fur.