LONDON, United Kingdom — When Dasha Zhukova, Russian-American heiress and editor-in-chief of Garage magazine, attended Pierre Casiraghi’s wedding at Lake Maggiore this summer, she wore a dress crafted from leaf-patterned guipure lace and lattice embroidery, with delicate spaghetti straps and a sand-coloured mesh lining that fell just below the knee.

“People started asking, 'Where’s that dress from?' The more people started wearing our designs, the more we became a mystery,” says Han Chong, founder and creative director of Self-Portrait, the London-based label behind the dress. “Dasha is a millionaire! To think that she chose to wear a dress that costs about $300 to an event where all the women were wearing couture.”

But this is all part of Self-Portrait’s appeal. The label’s intricately-detailed garments involve the kind of technical work one might expect from a luxury brand — but a Self-Portrait lace blouse costs $261, while a double crepe dress costs $492. “I could see such big potential in launching a contemporary brand that moves at the speed of the high street, but has a luxurious quality,” says Chong.

It’s a formula that appears to be working. Spring/Summer 2015 has been Self-Portrait’s best-selling collection so far, with a 92 percent sell-through rate. From 2013 to 2015, sales grew by 300 percent — 90 percent of which was driven by wholesale, and 10 percent by online sales. And in just over a year, Self-Portrait has attracted 250 stockists worldwide, including Dover Street Market, Harrods and MyTheresa.com, who have signed on for Spring/Summer 2016. How did Chong do it?

Chong’s interest in womenswear design came from unlikely beginnings. “My parents own a shop that sells beef jerky in Malaysia — nothing to do with fashion!” he says. “But I grew up with my aunt, a local artist, who specialised in paintings. She was very creative and had a big influence on me.” 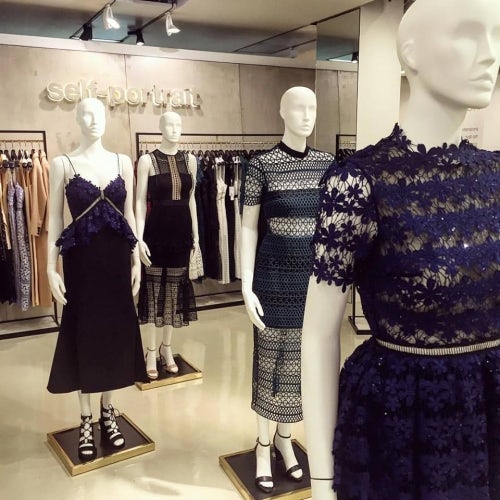 Indeed, the Central Saint Martins graduate first dabbled in art — Chong’s work was displayed at the 2011 Venice Biennale — before turning to fashion. In 2011, Chong launched mid-priced fashion label Three Floor with co-founder Yvonne Hoang. The label attracted the attention of fashion editors and was worn by celebrities such as Emma Roberts, Amanda Seyfried and Nicole Scherzinger. However, “I found myself compromising a lot of thoughts and ideas, so I decided to go my own way,” the designer explains.

After stepping away from Three Floor, Chong founded Self-Portrait in 2013. “By this time, I had a lot of high-street experience as well as high-end, so I decided to mix the two,” he explains. Chong uses a combination of embroidered lace and sheer overlays in many of his designs, using fabrics sourced mostly from Japan and Korea. “Our handwriting is glamorous, but it’s not totally full-on and over-the-top. It’s got an edge to it; a unique quirk. It’s not a conventional red carpet dress.”

Jennifer Lopez was the first star to publicly step out in Self-Portrait, wearing a $262 tuxedo wrap dress from the label’s first collection, when she was a judge on American Idol in 2014. A few weeks later, model Alessandra Ambrosio was spotted in São Paulo wearing the same dress. But it wasn’t until a year later that the brand began to gain significant red carpet buzz, appearing on celebrities as diverse as Reese Witherspoon, Kristen Stewart, Katy Perry and Beyoncé.

The real breakthrough for Self-Portrait, however, came when Selfridges became the label’s first major stockist in 2014. “When we got the opportunity to sign an exclusive contract with Selfridges, I felt that it was a big turning point for the brand,” says Chong. Since launching the label, Selfridges has sold over 100 Self-Portrait pieces each week.

“The label continues to be one of our best performers,” says Lydia King, buying manager at Selfridges. “The collection was genuinely different; approaching a very clear ready-to-wear opportunity from a different perspective, and taking contemporary womenswear in an exciting new direction.” According to King, Self-Portrait has been such a hit with customers that the brand has been allocated its own shop-in-shop in both Selfridges London and Manchester. 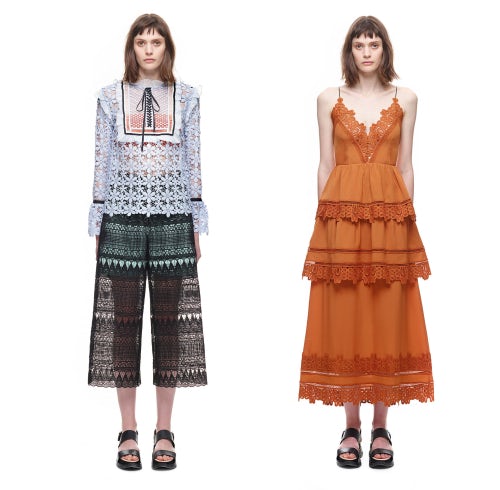 “[Selfridges] have re-ordered our pieces five times throughout the season. This brought massive exposure for us, and started to attract key department stores internationally,” adds Chong. Indeed, Net-a-Porter took Self-Portrait on board for Spring/Summer 2015, while MatchesFashion.com signed the brand for pre-Autumn/Winter 2015.

“We immediately fell in love with the brand’s unique mix of femininity with a modern edge. In its first month on the site, we sold a significant amount of Self-Portrait stock globally,” says Linda Ayepe, womenswear buyer at Net-a-Porter.com. According to Chong, Net-a-Porter sold out of Self-Portrait in two hours when it first launched the label in February.

“Self-Portrait is very modern with a strong identity, and is very well-priced, so it’s a winning combination,” adds Natalie Kingham, buying director at MatchesFashion.com. “The lace Azalea dress has been our best-selling piece, and sold out in just over 24 hours.”

Today, the Self-Portrait team consists of seven full-time staff, plus two additional team members in Hong Kong who help oversee shipping and production. “When I first started, I didn’t understand things like margins and sell-through. I always thought, 'How hard can it be?' But I definitely learnt a lot of things along the way; learning how to run the business, realising I have to do things like register my company,” says Chong, who attributes some of his business acumen to the experience of running his first fashion label.

Going forward, Chong’s top priority is growing the business in the US, Self-Portrait’s second-largest market after the UK, in terms of both online customers and wholesale orders. “The US is important for us, but I also want to do things in a way that is controlled. I want to grow the brand as organically as possible. It’s easy to get carried away,” he says.

New product categories are also in the pipeline. Chong plans to launch a bridal collection, and a sunglasses collaboration with Le Specs is set to launch in March 2016. “Kidswear might also be a future opportunity for us,” Chong says. “A lot of our customers have asked if we’ll do childrenswear. Imagine that! They want a mini-me version of themselves.”