Editor-in-chief Ezra Petronio talks to BoF about the magazine's inception, its raison d'être and its latest issue.

Editor-in-chief Ezra Petronio talks to BoF about the magazine's inception, its raison d'être and its latest issue.

PARIS, France — “It was pre-internet, pre-Colette, pre-Eurostar,” said Ezra Petronio, the passionate co-founder and editor-in-chief of Self Service, recalling the inception of the French fashion magazine he started with Suzanne Koller 25 years ago.

“If you wanted to get information, you’d had to make an effort. If you wanted to buy i-D magazine or The Face you had to go to one place on the other side of Paris. It was us against the establishment and it was exciting. When we started the magazine, it was quite a conservative time in France from a cultural point of view, on television, on media, there was very little representation for emerging talents in fashion or arts,” he continued.

Today, Self Service — which has tapped guest editors likes Juergen Teller, Joe McKenna and Paolo Roversi — has grown up with its generation and become a French fashion bible, as well as a calling card for Petronio, who’s also co-founder and creative director of the agency Petronio Associates and founder of Content Matters, a digital agency. “I’m surprised that the magazine is still relevant,” mused Petronio, before adding: “It’s because it has a raison d’être, which is to celebrate the creativity within our industry. More than ever, you need it today.” 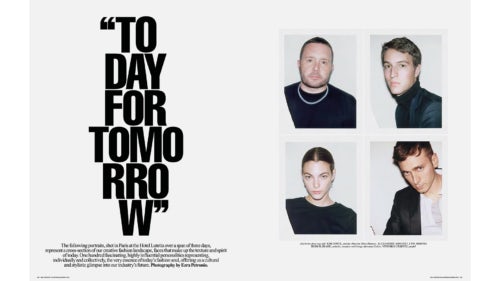 This Paris Fashion Week, the bi-annual magazine is celebrating its 25th anniversary with the release of its 50th issue, a 550-page whopper featuring inserts by Virgil Abloh, Helmut Lang and Stefano Pilati, as well as a 100-portrait series called “Today for Tomorrow” that includes headshots taken by Petronio, using a Big Shot Polaroid à la Andy Warhol, of Hedi Slimane, Alexandre Arnault, Alessandro Michele, Marco Bizzarri and others.

Both of its two covers, shot by David Sims and styled by Joe McKenna, feature the work of Nicolas Ghesquière, one from his time at Balenciaga and the other from his time at Louis Vuitton. “We wanted to come up with a concept that could best represents the passing of time in the last two and a half decades,” explained Petronio. “One of the designers to whom we were very close from the beginning was Nicolas Ghesquière. He is one these creative minds that has the capacity to stay relevant for so many and evolve. It was the idea of then and now.” The first cover also features Self Service’s original logo from the early nineties.

The new issue kicks off of a year of celebrations for the magazine that will include the release of two books published by Idea Books: “Self Service, 1994-2019, the Ads” and “The Vintage You,” named after a section of the magazine. Later this spring, an exhibition called “Self Service, Twenty-Five Years of Fashion, People and Ideas Reconsidered” will open at the Dallas Contemporary in Texas. "It’s aimed to show people, in the museum context, the creative process of a cultural and fashion magazine. The art, the photography, the pop culture, the people.” 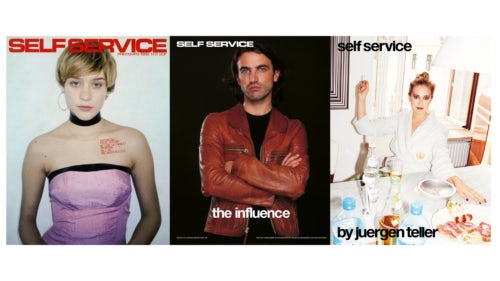 Looking back through the archives, Petronio highlighted Self Service’s Autumn-Winter 2000 issue. “That season we realised that designers and creative players had finally infiltrated the system, were doing some important work and were beginning to shake things up. We had two covers, one with Nicolas Ghesquière, the other one with Véronique Branquinho. And we did a big, long series of portraits of influential people: Raf Simons, Sarah [Andelman] of Colette... We all kind of felt that the issue was very important as it was an emblem of our generation."

“I believe that we have this role to maintain the transmission of fashion culture and knowledge, especially in the day and age of today where things are immediate, disposable, and the copy becomes the norm,” said Petronio. “It’s important to know where all of this comes from.”

Vanity Fair Italia Editor: 'I Am Not Doing a Magazine, I Am Building a Network'
Nicolas Ghesquière Continues at Louis Vuitton