The Hong Kong businessman, known for his satirical sense of humour as a Financial Times columnist, reportedly battled with liver cancer for some time. 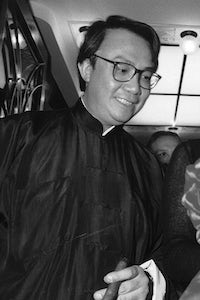 The Hong Kong businessman, known for his satirical sense of humour as a Financial Times columnist, reportedly battled with liver cancer for some time.

Tang, who split his time between the Asian financial hub of Hong Kong and London, was well known for his satirical sense of humour as a weekly columnist in the Financial Times weekend edition.

Media reported he had battled liver cancer for some time.

Tang, the father of two children and husband of British-born Lucy Tang, moved to England at the age of 13 where he said he began boarding school without speaking a word of English.

He set up his high-end tailor in 1994 and turned it into a global brand before Richemont took a controlling stake in 1998. The Swiss group — which also owns Cartier and Piaget — sold Shanghai Tang in July to an Italian entrepreneur for an undisclosed sum.

Hong Kong-born Tang aimed to fuse east and west through his business ventures such as the members-only China Club in the former British colony and the China Tang restaurant at the Dorchester hotel in London.

Tang, who was awarded a Knight Commander of the Most Excellent Order of the British Empire (KBE), was the grandson of Tang Shiu Kin, a famous philanthropist who founded the Kowloon Motor Bus company.

Friends with celebrities including Kate Moss, Naomi Campbell and the late Princess Diana, Tang was a constant feature in society magazines, known for his lively parties and exotic holidays in places such as Bhutan and the Sahara desert.

An honorary consul of Cuba and the sole distributor of Cuban cigars in the Asia-Pacific, Tang had been planning a big party with close friends at the Dorchester after doctors gave him a month to live, British media reported in August.

It is not clear if the party took place. The Dorchester declined to comment.

Tang said in an interview with the Financial Times in 2010, that he would like to be remembered by a Hilaire Belloc quote: "When I am dead, I hope it may be said: His sins were scarlet, but his books were read."