LONDON, United Kingdom — “I love women. They can wear a simple jean with a t-shirt and still look so strong. It’s all about their attitude and energy,” says 41-year-old designer and stylist Caroline Sciamma-Massenet. If the second half of that surname rings a bell, it’s because Sciamma-Massenet is married to French hedge fund manager Arnaud Massenet, the ex-husband of Natalie Massenet, the Net-a-Porter founder, co-chairman of Farfetch and chairman of the British Fashion Council. 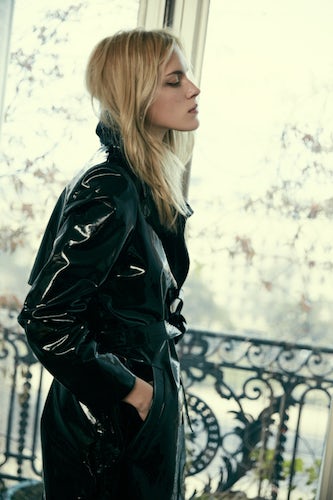 “We started from scratch. As a stylist, I do moodboards of what I like, so I started creating designs around characters like Brigitte Bardot in Le Mépris by Jean-Luc Godard. Also thinking about Carine Roitfeld and her high-waisted pencil skirts. Just really nice silhouettes,” says Sciamma-Massenet, whose line includes thinly-shaved, tanned shirts ($890); milk-coloured leather trousers ($1,650); Helmut Newton-inspired, patent trench coats ($3,220); and leopard-print, suede-lined capes ($4,850).

“Leathers have the ability to be simultaneously luxurious and rough,” she explains. “It is one of the world’s most expensive materials yet symbolises labour, rebellion, provocation and sexuality. This dichotomy and ability to be inside and out of more than one box embodies the essence of Skiim.”

It is an ethos that has attracted the likes of Net-a-Porter, Matchesfashion.com, Bergdorf Goodman, Saks Fifth Avenue, Neiman Marcus and Selfridges, all of which have expressed their interest in carrying Skiim next season.

“We’re going to grow quite fast. My husband gives me good advice about growth,” says Sciamma-Massenet. “The retailers need time to understand the brand first, that’s important for us. I don’t want to conflict styles and compete with them.” Skiim’s wholesale partners will mainly stock the label’s seasonal collections, with its own e-commerce site focusing on a permanent ‘Les Classiques’ collection.

Sciamma-Massenet began her career as a model, after being discovered, age 17 at a Ford Model Agency contest in Paris by Elite Model Management. She went on to secure high-profile campaigns photographed by the likes of Bruce Weber and Peter Lindbergh, and walked the runways of Paris, Milan, New York and Tokyo.

I learned to be demanding and provocative and to push the limits in a good way.

Her first opportunity to do so came in August 2010 when she was approached by a friend, an assistant to Carine Roitfeld, then the editor of French Vogue, who invited her to join the team as a stylist. “I’ve always had this creativity in fashion,” says Sciamma-Massenet. “Before I started modelling, I did one year of study as a stylist.” 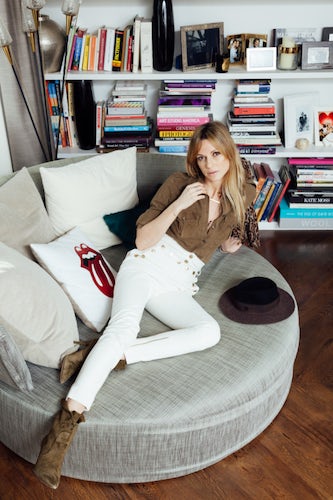 “My experience at Vogue and working with Carine helped me a lot. I learned to be demanding and provocative and to push the limits in a good way,” she says. “I learned from Carine to treat people really well to get the best from them. It’s about the team and sharing ideas.” After four years, Sciamma-Massenet was approached by Roitfeld to become the editor-at-large at CR Fashion Book, a position she left after six months to start Skiim.

Now, with their retail launch only days away, the label’s team of four — spread over sales, marketing, pattern-development and social media — is looking ahead. Skiim plans to expand into shoes and bags after its third season. “I will design it, but I will have a partner, as good shoes are very hard to make,” says Sciamma-Massenet.

“[In general] it’s kind of intimidating to create your own brand now, because there are so many out there,” she says. “But I never try to compare myself to big designers like McQueen, I’m not doing couture. I just want to create my vision.”