LONDON, United Kingdom — When Demna Gvasalia debuted his first runway collection for Balenciaga in March, it was an oversized red puffer jacket that took centre stage amidst the voluminous tailoring, exaggerated accessories and deconstructed eveningwear.

The jacket was a singular sensation, becoming an instant editorial and street style favourite, but its popularity was symptomatic of a far wider trend. In recent seasons, performance outerwear, no longer restricted to the ski slopes, has entered the zeitgeist.

“The woman today is realistic and wants something to keep her warm but is high-fashion, so it's smart of the brands to offer a streetwear and skiwear classic, but one that is more rooted in couture fashion,” says Caroline Issa, chief executive and fashion director at Tank Magazine.

“Fashion brands are seeing there is an appetite for it and people are buying it year after year, so if they can put a designer's name on that, they can actually make some money from it,” says Alexander Fury, chief fashion correspondent at T Magazine. 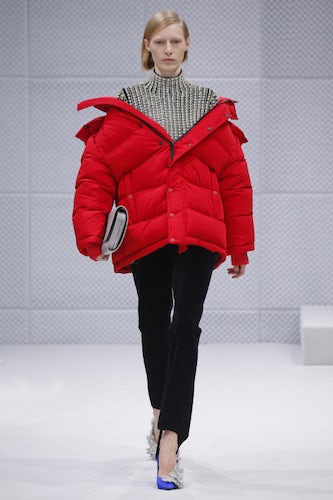 According to Just-Style, an online research portal focused on the textiles and apparel industry, the overall market for performance outdoor clothing is set to hit $21.6 billion in 2018, up from $17.5 billion in 2013.

“The consumer is looking for products that can offer them performance characteristics but are also fashionable,” says Matt Powell, sports industry analyst at the NPD Group.

Along with Balenciaga, luxury labels like Raf Simons, Stella McCartney and Marques' Almeida are getting in on the action, incorporating down coats, salopettes and snow boots into their offerings, while the likes of Fendi and Neil Barrett have launched full ski collections that are as fashionable as they are functional.

“I introduced swimwear last year and skiwear was a natural transition to expand the universe of the brand,” says designer Neil Barrett, whose eponymous label launched its first ski collection earlier this month. The 10-piece menswear collection ranges from Fairisle knits (from $515) to technical wool jackets (from $3,000), and is stocked at 18 retailers worldwide, including Harrods and Selfridges, in addition to 15 of the brand's own stores.

Like Neil Barrett, Dsquared2 has also ventured into skiwear with 20-piece men's and 25-piece women's ski collections — which include $360 snow boots and a $2,375 fur-trim parka. “Winter holiday travellers that reach the most exclusive ski resorts from all across the world are potential customers for the brand and retail presence in these locations is important,” say Dsquared2 founders, Dan and Dean Caten, whose ski collection is available in St. Moritz, as well as far from the slopes in Paris, Rome, Los Angeles and beyond.

The opportunity has also caught the eye of fashion retailers, like Net-a-Porter, Matchesfashion and Mytheresa, which have all added dedicated skiwear sections to their websites over the past two years, stocking a mix of both traditional performance players and designer fashion brands.

“We launched skiwear in 2014 and instantly saw a phenomenal reaction with lots of styles selling out within weeks. Since then the category has grown by over 500 percent,” says Sarah Rutson, global vice president of buying at Net-a-Porter. For 2016, Rutson says Net-a-Porter's buy for the segment increased by nearly 200 percent compared to the year before, with sales rising over 170 percent since 2015.

Matchesfashion's womenswear buying director Natalie Kingham says she has seen similar demand for the category. The e-tailer's "Ski Studio" offers brands ranging from Adidas by Stella McCartney and Canada Goose to Fendi Ski and Perfect Moment, and has increased its buy for the segment by nearly 100 percent since last year, with sales having increased by about 50 percent. “There used to be no choice in your skiwear and brands have seen the opportunity to grow their businesses and make sure that if [consumers] love a brand like Fendi, they can wear Fendi whatever they're doing,” says Kingham.

More traditional outerwear labels like Canada Goose and Arc'teryx are taking note of the growing fashionability of performance outerwear too. “For Arc’teryx this means continuing to push our core functional principles and aesthetic identity while paying more attention to colour and merchandising opportunities,” says Carl Moriarty, design director for apparel at skiwear stalwart Arc'teryx.

Of course, the blend of fashionability and performance outerwear is not new to a brand like Moncler. “The brand aims to cover three specific targets and that's why the collections are composed by three different segments: high performance, performance and style, and aprés ski,” says Remo Ruffini, president and chief executive officer of Moncler, explaining the company's product strategy.

For Autumn/Winter 2017, Neil Barrett plans to make his ski and ski-inspired products more accessible, cutting prices by 30 to 40 percent. “We're giving ourselves a long period to make sure everything is on-point, so when you look into the mirror, the garment can take you from the piste directly into the bar.”