With its first acquisition in a decade, SMCP intends to strengthen its footprint in the men’s market, which it is already developing through Sandro men. 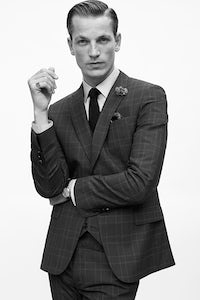 With its first acquisition in a decade, SMCP intends to strengthen its footprint in the men’s market, which it is already developing through Sandro men.

PARIS, France — SMCP, the owner of Sandro, Maje and Claudie Pierlot, said Tuesday it had acquired the French men's suiting label, building on its ready-to-wear portfolio.

“The rationale behind the transaction is that it’s right in our strategy,” he said. Over the last five years, the company has focused on expanding its core women’s ready-to-wear business while investing in “three legs: men, digital and accessories,” he added.

De Fursac sales were €41.4 million ($47.1 million) in 2018, with a “very high” like-for-like growth of 5 percent “in a challenging French market,” he said. tailoring represents 70 percent of revenue, and casual wear 30 percent. That ratio is flipped at Sandro Men, limiting the overlap between the two brands, Lalonde said. De Fursac suits prices range from €850 to €1,150 — higher than the average suits price at Sandro — and the average ticket is €450.

Sandro Men represents 10 percent of the SMCP revenues and grew 13.5 percent in 2018, faster than the average growth of the group.

Luca Solca, a luxury analyst at Bernstein, called the move surprising, given that there is so much room for growth in SMCP’s current portfolio.

“I guess they see the opportunity to apply their growth formula to this brand, as it seems complementary and poised for a similar accessible-luxury positioning,” he said.

Founded in 1973, De Fursac is best known for its expertise in tailoring but has expanded its casualwear offering over the past several years, driven by Artistic Director Alix Le Naour, who joined in 2012. The brand had been renamed De Fursac from Monsieur de Fursac in 2003, as part of a more global revamping.

“I am convinced that SMCP is the ideal partner to support our ambitions and that our talented teams will integrate perfectly into this new group,” said Edmond Cohen, De Fursac’s president since 1990, who owned 60 percent of the brand.

SMCP will significantly accelerate De Fursac’s international expansion in Europe and Greater China, hoping to increase its international sales to 30 percent of the business in the mid-term. “I think the Asian market will be the key driver in menswear,” Lalonde said.

At the moment, the label’s retail network consists of 54 points of sale including 19 standalone stores, 28 concessions in department stores, 6 outlets and the Website in France and Switzerland.

SMCP’s distribution strategy, which is driven by direct retail and concession, allowing them to better control inventory, experience and discounting cycle is very similar to De Fursac in that sense.

The group did not indicate in the release plans to move De Fursac into the US market, where its brands — in particular, Sandro and Maje — have made headway in the last few years.

“We're not going to skip the steps. We're going to do the same development that we did with Sandro Men and Claudie Pierlot. First of all, we’ll deploy mainly in Europe, in a second step in Greater China and in a third phase in the US,” Lalonde said.

The executive also sees opportunities in developing the leather goods and sneakers categories.

The group also plans to develop the digital channel for De Fursac, aiming to up its online sales to 10 percent of the overall pie, from 5 percent currently. Most of SMCP’s business remains offline: The digital channel represented just 15 percent in 2018. The ideal share generated by digital for Lalonde is “the highest possible because it’s the most profitable channel.”

The group, which is majority-owned by Chinese textile and clothing company Shandong Ruyi, had 1,485 stores in the first quarter of this year and surpassed €1 billion ($1.1 billion) in sales in 2018. Its shares have been traded on the Euronext in Paris since October 2017, when it was valued at €1.7 billion (about $2 billion).

Lalonde believes in accessible luxury for clothes. “Luxury is a buoyant segment and very concentrated. Accessible luxury is a segment that is at least as attractive, if not more, because of the growth of the middle class. The market is very buoyant and very fragmented. I think the market will get concentrated and we can be one of the players who have platforms for the brands.”