The deal will allow Foot Locker to tap into the secondary sneaker market, and give Goat heft outside the US and at physical retail. 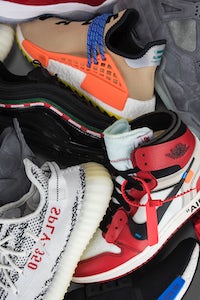 The deal will allow Foot Locker to tap into the secondary sneaker market, and give Goat heft outside the US and at physical retail.

NEW YORK, United States — The secondary market for sneakers continues to heat up.

The move will allow Foot Locker to tap into the secondary sneaker market, where rare and limited-edition pairs fetch eye-watering prices minutes after they "drop." With Foot Locker's backing, Goat plans to scale in the US and abroad, leveraging the footwear giant's extensive network of brick-and-mortar stores, which spans more than 3,000 locations in North America, Europe, Asia, Australia and New Zealand.

Goat is part of a new wave of peer-to-peer e-commerce platforms like StockX, Grailed and Stadium Goods, where growing numbers of male millennials gather to buy and sell streetwear and sneakers to and from each other. The resale marketplace has been estimated at $1 billion to $2 billion, a sliver of the total global sneaker sales at $100 billion, according to Matt Powell at NPD Group. But expensive sneakers are fast becoming lucrative status anchors for young men the way luxury handbags have long been for women.

Goat is unusual in the space because of its singular focus on the sneaker category. StockX is beefing up its handbag and watches offering, as well as streetwear, and Grailed offers streetwear and luxury apparel.

“We’re gunning for the Foot Lockers of the world,” Goat founder Eddy Lu told Recode after its 2018 merger with competitor Flight Club, which operates stores in New York and Los Angeles, as well as an e-commerce website. Lu added that he had ambitions to grow the business beyond the secondary market.

Meanwhile, Foot Locker has faced several challenges in recent years: more customers are shopping online or turning to the secondary market to buy sneakers. The retailer also relies heavily on Nike, which is pivoting more of its business to direct-to-consumer sales.

In its most recent quarter, Foot Locker’s sales decreased by 0.5 percent to $1.9 billion, while comparable sales were up 2.9 percent.

Foot Locker and Goat Group said they will “combine efforts across digital and physical retail platforms,” but it’s unclear whether they will merge primary and secondary sales.

Founded in 2015 by Eddy Lu and Daishin Sugano, Goat began as an app for the buying and selling of collectible sneakers. The company authenticates product as counterfeiting is a major problem for brands like Nike and resellers trying to feed the growing demand for rare and limited edition pairs.