GENEVA, Switzerland — Sotheby’s is auctioning the royal jewels of the Bourbon Parma family, including 45 pieces owned by Queen Marie Antoinette. Made public for the first time in 250 years, the collection is a milestone for the auction house, which spent ten years to secure the lot. Christie’s, on the other hand, is selling the "Pink Legacy," a diamond expected to fetch between $30 and $50 million, potentially the most expensive of its kind in history. Ahead of the auctions scheduled to take place from November 13 to 15, competition is steep.

Sotheby’s and Christie’s are now travelling the world to court high net worth bidders, as they turn their focus away from institutions and museums to private collectors. As part of a multi-pronged seduction strategy aimed at gaining momentum for Geneva, both auction houses are combining more traditional formulas, such as hosting client dinners in key cities, with digital tactics, such as an Instagram teaser campaign by Christie’s in collaboration with The Outnet. Sotheby’s, meanwhile, has recruited social magnets like Bianca and Coco Brandolini, Elisabeth von Thurn und Taxis, Eugénie Niarchos and Noor Fares to lure aspiring collectors.

Only four pure vivid pink diamonds of over ten carats have appeared for sale in almost 250 years.

The focal markets are New York, London, Paris, Hong Kong, Taipei and Singapore. In 2017, buyers of Christie’s jewellery came from Asia at 25 percent, the US at 38 percent and the EMERI region (Europe, Middle East, Russia and India) at 37 percent. In terms of bought value, however, Asian buyers accounted for 31 percent. "They spend more on their purchases," says Aline Sylla-Walbaum, global managing director of luxury categories at Christie’s. She adds that Asia is seeing a rise in female clients: women of independent wealth who are buying jewellery not only for its investment value but also to wear. 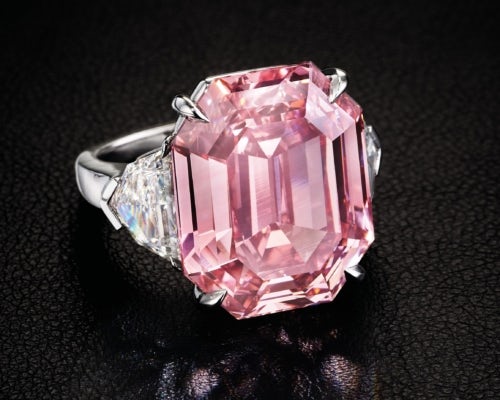 Wearability has become a key component to price collectible high jewellery, according to Andrés White Correal, senior director of international jewellery business development at Sotheby’s. "The mathematic equation of desirability in our business has to include contemporary wearability," he says. "A piece will be worth more if the client can wear it to a collector’s dinner at FIAC [an international contemporary art fair hosted in Paris], to give an example."

Singaporean and Taiwanese collectors, he continues, are especially inquisitive. "Asian consumers have all the D-flawless diamonds they can have, so they are now educating themselves and investing in antique jewellery that will set them apart from consumers of modern brands." What’s worth noting is that local culture does not affect consumer behaviour at an auction. In the room, a client’s approach will be shaped by whether they are after an emotional purchase or an investment, he explains. "The savvier collector will ask, in front of a full room as the auction happens, what’s their buyer premium on an incremental bid. That's how aware they are of the value of their money."

A piece will be worth more if the client can wear it to a collector’s dinner.

The new era of infinite liquidity propelled by central banks provides the perfect framework for the "Pink Legacy." At 18.96 carats, it's the largest fancy vivid pink diamond ever offered at auction by Christie’s. (The jewel descends from the Oppenheimer family, the South African dynasty who ran DeBeers for three generations until they sold their 40 percent stake to mining group Anglo American for $5.1 billion in cash in 2012).

Only four pure vivid pink diamonds of over ten carats have appeared for sale in almost 250 years, with a world record set in November 2017 when Christie’s Hong Kong auctioned the "Pink Promise." At just under 15 carats, it sold for $32.4 million or $2,175,519 per carat. With the "Pink Legacy," Christie’s aims to establish a new record based on size and rarity, the buzzword permeating the Geneva sales.

"Every element of rarity adds to the price," says Sylla-Walbaum, adding that the synergy of Christie’s and Sotheby’s to attract collectors to Geneva’s Magnificent Jewels auctions is based on one key axiom: "The more exceptional the jewels are, the more we will all trade."

Handbags at Dawn: Why Auction Houses Are Targeting Luxury Fashion