Today, BoF begins an exploration of  fashion in an unlikely place: South Africa. In the past year, with the election of Barack Obama as President, increased attention has been focused on the African continent, from which part of Obama's family hails. Not only this, Michelle Obama has become an overnight fashion icon, supporting young American designers like Thakoon and Jason Wu. Thus, it seemed like a perfect opportunity to have a look at what Africa might offer to the global fashion industry.

JOHANNESBURG, South Africa — Fashion is probably the last thing that comes to mind when thinking of Africa. Rather, it is the usual stereotypes of Africa as the continent of entropy and despair that come to mind more readily. Sadly, Western popular culture has commonly had a pre-ordained idea of "African Fashion" linked to African traditionalism and ethnicity, effectively presenting the entire continent as a one dimensional jungle of only things exotic and ethnic.

And what do top designers and fashion magazines reference when they are inspired by Africa? Ethnic this, safari that, khaki this and beaded that. Not to say that their inspiration is unfounded, it has just become redundant and boring compared to what's on offer in the crazy, dirty and sexy streets of Lagos, Nairobi and Kinshasa.

Previously, the most famous resources to come out of this country were gold and precious stones, and that was also about the closest there was to anything resembling a "fashion industry". There were a few designers in the 1980s and 1990s during the time of Apartheid, but they were not representative of the people of South Africa, who belong to many ethnic groups and speak eleven languages.

With the exception of designers like Clive Rundle and Marianne Fassler, who paid homage to the land by referencing or commenting on its history and heritage, early 1990s South African designers were of the sequinned flag dress, sash and tiara ilk. They served a niche market of a privileged few and liked to borrow their styles from European and American designers, as did the larger clothing retailers and boutiques.

It's not that this country lacks creativity, but, as is true elsewhere, the opportunities and platforms to actualise this creativity are few and far between.

In 1997 with the help of a few friends, Lucilla Booyzen, a former teacher, model and fashion producer who had traveled to and worked with international fashion weeks including Paris, New York and London, launched a platform where the few designers of the day could showcase their collections to the public and media. With a car company as the main sponsor, the very first South African Fashion Week (SAFW) was held in a tent at one of Joburg's finest malls and featured a few established white designers. While far from an international scale event, the event did serve to seed the concept of a South African fashion industry.

By 1998, SAFW had grown bigger, with the addition of a New Talent Competition to find new design talent and 1999 saw the first black designers showing at SAFW. Still, there were no retail sales outlets for the designers after the shows and the fashion was not entirely reflective of the search for a new South African identity that was going on in private and in public.

Then in 2000, a small design house led a fashion revolution, freeing South Africans of all races from the fashion oblivion that our history had landed us in. During South African Fashion Week's 2001 Summer Collections, the black-owned fashion house Stoned Cherrie showed for the first time, in what was arguably the first ever collection to represent South Africa's real soul in clothing. 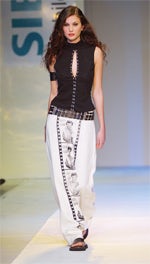 What was so revolutionary was the fearless referencing of South Africa's political and cultural heritage, the development of flattering silhouettes which accommodated the African woman's derrière, and the use of traditional fabrics that had never been associated with fashion or pulchritude.

The collection featured bright coloured cotton t-shirts and a-line dresses with the iconic anti-apartheid struggle hero, Steve Biko's face on the them, and others with covers from vintage Drum Magazine, the first black lifestyle magazine in Africa established in 1951. Their version of a traditional Xhosa A-line skirt that mysteriously made anybody who wore it look thinner and curvier at the same time.

21 other black designers showed that year including Sun Goddess, Darkie, Bongiwe Walaza, Ephymol, Loxion Kulca, depicting a confluence of past and present, urban and rural, black and white in their brave and true collections. Then, the early 21st century signalled the end of an era of overly literal patriotic expression that the initial freedom years had given birth to in all the arts, not just fashion.

The past 13 years have been about establishing a fashion culture in South Africa, which SAFW and African Fashion International have succeeded in creating. The next phase will be to develop the business of fashion - but there is a long road ahead.

Milisuthando Bongela is a journalist, trend observer and fashion commentator based in Johannesburg.