As the once humble sneaker continues its ascent from streetwear symbol to luxury icon, the BoF Spotlight shines on fast-rising, Los Angeles-based luxury sneaker and leather goods brand Buscemi.

LOS ANGELES, United States — “Who would ever think that a man would want to put a shoe that looks like a purse on his foot?” asks Jon Buscemi, who last year founded his eponymous sneaker and leather goods brand, referring to one of the most prominent models in his collection: a sneaker with a buckle in the form of a slim belt and a lock which bears intentional similarity to that most iconic of Hermès bags.

The correct answer, of course, is no small number of people. The model, which had an initial manufacturing run of 600 pieces — 200 in each of three colours — is now being sold along with other items by leading retailers around the world, including Colette in Paris, Harvey Nichols in London and Barneys and Kith in New York. Indeed, in just one season, Buscemi — which is based in Los Angeles and currently employs nine people — has already grown its number of stockists from 18 to 40.

“Far greater than we expected,” says Buscemi of the response to his first collection, which also contained accessories such as a dog leash decorated with real gold, a bag and even a leather tie. “Before we shipped the shoes to the retailers, we sent photographs to the buyers. The shoes were sold before they reached the store. Amazing reaction.”

As well as the appeal of the product itself — the result of intelligent and balanced design that’s unafraid of provocation — the buzz around Buscemi's new brand is linked to his impressive resumé and prominent standing in sneaker sub-culture over the past decade and a half.

“Something from the spirits told me that I needed to be in this industry,” he says, recounting how he transitioned from a fanatical collector of sneakers working on Wall Street to a respected sneaker designer. “I got recruited to become a trend forecaster and a category manager at DC Shoes in 2002. They moved me to San Diego and it was like going back to get my PhD in footwear. I learned everything from the ground up. From the concept stages, development, production, design, all the way through sale to the customer. I learned from the best people in the industry."

Three years later, Buscemi was part of the team that founded cult American sneaker brand Gourmet, which excelled at updating the nostalgic motifs of classic sneakers. “We wanted to do athletic, but casual,” he explains, describing the concept with which they started. “Instead of more fashion, more athletic. That was always the goal for Gourmet.”

Despite the success of Gourmet — and the fact that the brand soon found itself competing not only with other small labels, but also with footwear megabrands like Nike and Reebok — Buscemi decided to leave the venture after almost seven years. “I think that everything in life has an expiration date. When we started Gourmet, we had great intentions, but over the years, sometimes very strong willed people go in different directions. It turned a little bit more commercial.”

Not a surprise, then, that the key word in his new brand's strategy is "selective," and that Buscemi's Instagram stream features images of vintage Louis Vuitton suitcases and Fabergé eggs.

“The difference [between Gourmet and Buscemi] is very wide,” the designer says. “At Buscemi, the aim was to start a true American luxury brand. The products are at the top level of product-making. The goal is that whatever category we enter,” — the company has produced a range of other products, from a leather jacket to a skateboard, but its sneakers have, by far, attracted the most attention — “we’re going to enter it with the best manufacturing partners in the world.”

This approach is reflected in a price point of $750 or more per pair of sneakers. “The shoe is very, very expensive to make,” Buscemi notes. “The function is just a traditional mark-up, actually. But we're talking about a shoe that has hand painted edges, 18-carat gold hardware; the leather is from the best tanneries in all of Italy. I think that 99 percent of consumers understand it once they get the shoe in their hands.” 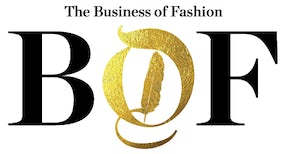 For this month’s Spotlight, Buscemi has designed a custom BoF logo, featuring the company’s signature feather icon gilded in gold. "Of course [it’s] in gold, because gold makes everything better," he says.

Though the collection is directed mainly at men, Buscemi plans to offer some of his pieces in sizes and colours designed to attract women. “I don’t want high heels in my office, but I think there is a good market out there for women who are interested in wearing men’s sneakers.”

But how do you generate distinction in a flooded market in which every luxury fashion house offers designer sneakers?

“I think the fashion houses have [adapted] to the lifestyle of the consumer, but at the end of the day you’re still dealing with a huge fashion house that is producing these shoes. My business is at a very homemade level. We’re only making a very small amount of these shoes in an atelier in Italy. The big brands are making hundreds of thousands of shoes. I can truthfully say that my product is far superior to some of these fashion houses.”

“Louboutin, Valentino, Saint Laurent and Lanvin,” names Buscemi as his primary competitors. “There’s a big shift in the sneaker community,” he adds, hinting at why he made the move upmarket. “Guys are getting sick of Vans and Converse. They’re wearing Phillip Lim, Alexander Wang. They’re graduating as consumers. And now the look and the feel is going all the way down to the foot.”

Indeed, in recent seasons, the humble sneaker has seen its status rise from streetwear symbol to luxury icon. But is the category becoming so successful that it might one day go out of fashion?

“Only time will tell, but I think that what’s going to happen is that the category will never die. I think it’s a survival of the fittest,” says Buscemi. “My goal is very simple: to have a relevant brand and a brand that I’ll be able to give to my son when he’s 21, 15 years from now. That’s my goal.”