LONDON, United Kingdom — Question: how does one dress for a selfie? Answer: statement earrings. Not since the '80s have such loud ear accruements been so prevalent. But today the rules are different. Whereas once costume jewellery was excessively piled on with a full face of make-up and bouffant hair, today it is an accent to oversized shirting and distressed denim; the focal point of the “no make-up” make-up look and abbreviated elfin hairdos. Earrings (or earring, singular) can create a sense of personality for someone who dresses simply. It can even create an entire look for a FaceTime or Skype conversation, even if one’s bottom half is still dressed for sleep. Essentially, statement earrings are what shoes were to Carrie Bradshaw for a generation who wear Stan Smiths.

It’s no longer just costume jewellery that veers towards bold statements, but the most traditional of fine jewellers too. Across the board, the styles are bigger, brighter, flashier and more sculptural than ever, and some of them even extend way below the shoulder. They could be architectural sculptures in mismatched colours, sizes and stones, made of fringed shoulder-grazing chainmail, singular hammered-gold Matisse shapes, or ornate hoops of baroque proportions. Restrained diamond or pearl drops they are certainly not. 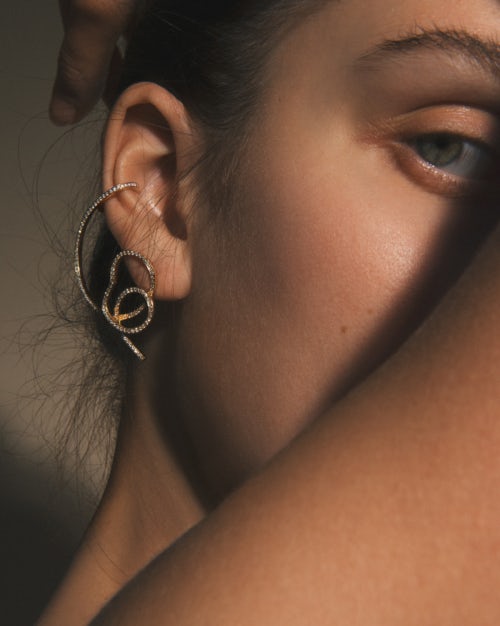 “What I love is that it is so mainstream which is unusual for a jewellery trend because often things are shown on the runway and then people won’t wear it,” says Carol Woolton, British Vogue’s jewellery editor. “It’s Topshop and H&M; it’s Piaget and Chopard; it’s Céline and Marni. Literally everybody is into big statement earrings.”

“I get some sort of sense of completion to an outfit from it,” says Tilly Macalister-Smith, founder of @earafterear (an Instagram account dedicated to statement earrings in all their variations) and senior director of content at Diane von Furstenberg. Earrings are also easy to adopt. “It’s not like dying your hair where you have to commit to it; it’s not as if it’s a fabulous winter coat that is thousands of dollars. It’s just a little bit of fun and I think people still love that transformative effect of fashion.”

There’s also the changing face of the jewellery industry itself. “Fine jewellery is becoming more fashion influenced, and the price point between fashion jewellery and fine jewellery is narrowing,” says Patti Worth, jewellery buyer at MatchesFashion.com. “Statement earrings account for a huge part of our business and it’s only growing, so much so that we now have to narrow down on sub-categories.”

Worth is keen to point out the return rate on earrings is often lower than other categories as there are less issues concerning sizing and fit. They can also be an ideal gift. For Worth, Simone Rocha and J.W. Anderson are two of the most popular fashion-cum-jewellery designers (both brand’s earrings range from about $120 to $380), as well as Rebecca de Ravenel’s tiers of baubles ($330 to $380) and Anissa Kermiche’s quietly loud ear sculptures ($240 to $1,325). A spokesperson on MyTheresa.com’s buying team concurs. “The brands that are most popular at the moment are Simone Rocha, J.W. Anderson, Dolce & Gabbana, Miu Miu, Gucci, Balenciaga and Oscar de la Renta,” she says. “The statement earrings even get bigger and more creative every season.”

Statement earrings are what shoes were to Carrie Bradshaw for a generation who wear Stan Smiths.

“Women play with androgynous looks, they have short hair and no make-up — earrings act as a new precious makeup,” says Delfina Delettrez, 40 percent of whose fine jewellery business is contributed by earrings. “I have now gone back to designing ‘couples’ after having introduced and worked on the single earring for many years. I like to wear one micro and one macro. This is how I see them now.” Her pairs of earrings range from $2,750 to $18,150. The height of her statement earring fixation reached its zenith at her friend Giovanna Battaglia-Engelbert’s wedding, for which Delettrez made a single earring with a large green stone on the ear and five branches of metal and stones traversing up the bride’s chignon. 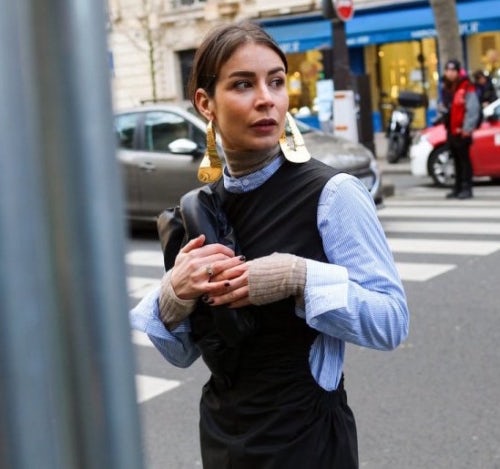 Delettrez made a name for herself with single earrings (priced between $385 to $15,000) that were front facing but pierced through the back of the lobe, so that the earrings formed a semi-circular structure behind the ear. “They had such success because they are almost invisible, and very light,” she surmises. “The shape is reminiscent of the belly piercing; it’s a shape that speaks to my generation, and like the belly piercing you never take it off. You sleep with it and you almost forget about it.”

“The way I work is very much from my own way of wearing jewellery,” says Sophie Bille Brahe, the Copenhagen-based jeweller. “I wanted bling in my ears and I did bling on both sides and I thought, oh my God, I look like a Beckham.” The result was Brahe’s “Croissant de Lune” design ($5,700), which is a crescent of diamonds graduating in size set in 18-karat gold, as well as the “Elipse,” two pearl globules connected by a thin curved pole ($720 to $770). Earrings make up approximately 80 percent of Brahe’s business, which has grown by almost 300 percent since its launch in 2011.

The success of Maria Tash, the New York-based piercing artist and jewellery designer who has taken the world by storm with her unusual placement of earrings, is also testament to the growing cultural emphasis on the ear. After being introduced to London and Paris via various pop-ups, she was given a large 1,500-square foot space in Liberty last May; the revenue of that particular space has since doubled, from $3.8 million to $7.6 million. Her piercing bar offers a luxurious destination for those who may not feel comfortable wandering into a tattoo parlour, and uses Tash’s own jewellery designs for piercings.

“Fine jewellery and piercing doesn’t have anything to do with tattooing,” says Tash. “Over the years the jewellery has improved for other piercings that aren’t in the frontal lobe. It’s not about having lots of them, but beautiful things in unexpected places.” She adds that the British and Parisian are much more receptive to multiple piercings, and that she is currently working on opening permanent outposts across the world, as well as developing the wholesale business for jewellery which sells through luxury sites such as Net-a-Porter and MatchesFashion.com (prices generally hover between $150 and $500, with the exception of a few more diamond-laden designs). “It sells on its own merit, but it helps to have jewellery stylists who know how to fit particular pieces to different parts of the ear.” 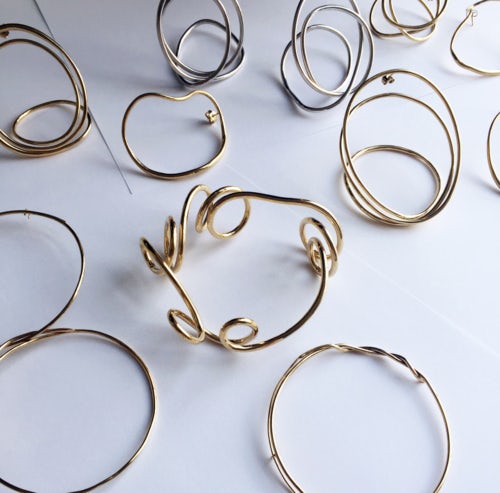 Anna Jewsbury, who started Completedworks in 2013 with her brother Mark, has a rapidly growing business due to her sculptural silver earrings — silver because it is lighter than gold, and therefore can used for larger-scale and more complex designs. “Earrings are the most popular and it’s mainly single earrings,” she says of her jewellery, which begins by rolling clay into larger sculptures and is then scaled down. In the last year along, her business has grown by 100 percent, 60 percent of which is contributed by earrings ($370 to $1,520 for the most part; $11,400 to $15,200 for marble, gold and diamond pieces). “Bridal rings have the most value, but you don’t need a ring size to buy earrings.” The result is that most of her earring customers come through her digital platforms and buy online, which is indicative to the changing attitudes to buying fine jewellery.

Woolton says that even the Place Vendôme’s traditional fine jewellery houses have become more reactive to trends in recent years. “Victoire de Castellane brought a costume jewellery sensibility to fine jewellery and did whatever she wanted with it,” she says of Christian Dior’s long-serving creative director of fine jewellery. “Recently at Cannes, there were so many statement earrings, long shoulder dusting earrings, especially from Chopard.”

In May at the Sotheby’s “Magnificent Jewels and Noble Jewels” sale in Geneva, Switzerland, a pair of contrasting coloured diamond earrings (a blue one at 14.54 carats and a pink one at 16.00 carats) fetched a record $42.1 million and $15.3 million respectively, and were bought by the same buyer for a record $57.4 million. “Sometimes they put the stones in a setting just for the mounting,” notes Woolton. “Or often they’ll be sold separately, but they sold these together to the same buyer and I like to think that it’s because they’d like to wear them. $57 million for a pair of statement earrings!”