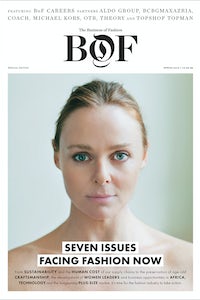 LONDON, United Kingdom — In a nondescript building tucked away on a quiet street in West London, Stella McCartney and her team are comparing the properties of a real leather shoe to the various non-leather swatches being considered for her brand’s Winter 2015 shoe collection. McCartney is wearing a cream blouse, open at the neck, with faded blue jeans and non-leather boots. Pinned up against the wall are boards labeled: “Heels,” “Mules,” and “Cutouts.” A large white table is scattered with moulds, lasts and uppers — as well as scissors, ID cards, empty glasses and a partially-eaten package of organic dark chocolate.

Women of differing ages, ethnicities and body types come in and out of the room with a constant flow of new ideas and creative references while McCartney acts as a kind of real-time editor, deciding what colours, materials and shapes feel right for the upcoming season. An assistant is frantically taking notes to capture McCartney’s feedback while snapping digital photos of the things that catch her eye.

“That non-leather thing was doing a bit of a leather thing,” McCartney declares obscurely, at one point, caressing one of the samples and then draping it on top of her foot. “With our pull-ons, there’s always been a bit of a fit issue. So what I found really exciting about Autumn was that they fitted.”

She is speaking in Stella McCartney code, but her team seems to understand exactly what she means. They go on to debate the shape of the toe, the size of the heel and whether this particular shoe shape would work best for day or evening. But soon, talk returns to the materials. According to the brand’s stated values, Stella McCartney does not use any animal products — no leather, no fur, no skins, no feathers.

At this point, McCartney turns to me, a fly on the wall. “We always have this conversation about our non-leathers. We are, of course, the most ethical and loving company in the fashion industry,” she says half-joking, almost mocking herself, “but at this stage I always have to apologise to my designers and creative team for the limitations [this creates].”

“It has the texture of a real leather,” says one team member, examining a new fabric sample brought in by one of the junior designers. Even now, almost 15 years after the Stella McCartney brand was born, there are still limited non-leather materials suitable for making high-fashion accessories.

“Material is hard,” says McCartney, in her office, after the design meetings have concluded. “Clearly leather is a great material. It wears well. It moves. You can wash it. It's real. One of the hardest things is to design something that is desirable and then to take that design and make it in a way that is not conventional. We’re sourcing our own material, developing our own material — we’re not using PVC.”

McCartney’s business was launched in 2001 in a 50/50 joint-venture with Kering, the French luxury conglomerate formerly known as PPR and, before that, Gucci Group. Kering does not break out Stella McCartney’s revenues and profits, but recent growth in the brand’s UK business is an interesting proxy for the company’s overall momentum. Between 2010 and 2013, top line revenues at Stella McCartney Ltd, which includes two directly-operated stores, grew by more than 60 percent to £28.4 million (about $44 million), with profits of £3.4 million (about $5 million), according filings at Companies House in London.

But this represents only a fraction of the total Stella McCartney business, operated through several other companies incorporating 30 directly-operated stores, 20 franchised stores and 600 wholesale accounts in more than 70 countries around the world. Market sources estimate annual global revenues at around $150 million to $200 million, though the annual retail value of Stella McCartney products is likely significantly more, through branded collaborations with Procter & Gamble for beauty, Adidas for sportswear and Bendon for lingerie.

In January of this year, the Stella McCartney business was the subject of a Harvard Business School case study, a prestigious honour reserved for companies employing innovative business models that the world’s top business students can learn from.

In short, McCartney has built the world’s first sizable global fashion brand rooted in sustainability. But how did she do it?

Read the full story here and order your issue of the fourth special print edition of The Business of Fashion, available from March 30th 2015.