NEW YORK, United States — “I’m about as fashionable as Kanye is black. Only when it’s convenient.” And with that, actress Issa Rae hit the ground running as host of the 2018 CFDA Awards, which took place for the first time in the actually fashionable borough of Brooklyn.

It was an evening of many firsts. Rae noted that she was not only the first person of colour, but also the first woman in almost a decade, to host the annual awards show recognising the achievements of designers and other change agents driving the American fashion industry forward.

The creator and star of HBO’s zeitgeist-capturing series Insecure brought a warm energy to the proceedings, which took place at the Brooklyn Museum and celebrated both the stalwarts (Ralph Lauren, Donatella Versace) and the disruptors (Supreme, British Vogue editor-in-chief Edward Enninful).

Throughout the evening, there was plenty of encouraging talk about diversity and inclusion. “British Vogue is about being inclusive — it’s not just the color of your skin, but the diversity of perspective,” said Enniful, who was recognised with the Media Award in honour of Eugenia Sheppard. “That is what drives us forward and not back, I have a bold vision of what the future can and will look like.”

However, the most significant takeaway that emerged from the string of speeches may have been that fashion is not an easy business, and might be tougher than ever.

The Council of Fashion Designers of America itself is not immune to the challenges facing an industry that has been entirely uprooted by the irreversible shift in the way consumers shop for — and think about — fashion. Just last week, the trade organisation released its 2017 annual report, revealing that revenues decreased by $2.9 million from the prior year, and revenues from membership specifically decreased by $430,000. (Nonetheless, the CFDA spent $14.6 million on programming for its members in 2017, $1.6 million more than it did in 2016.) 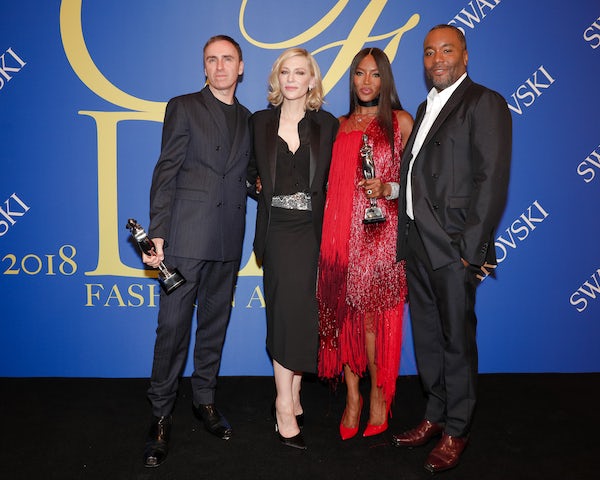 Steven Kolb, president and chief executive officer of the CFDA, attributed the drop in revenue as natural ebbs and flows. “Our membership dues go up and down; we are actually ahead this year [from where] we were last year,” he told BoF before Monday night’s show as he patiently waited for honouree Ralph Lauren to walk the black-and-white checkered carpet. He added that the organisation sometimes lets dues lapse for members who are going through rough patches in their businesses and that the organisation is also reckoning with the fact that some major sponsorship dollars from companies including Amazon and Mattel are simply not on the table anymore. This year, car share service Lyft came on as a partner, joining Swarovski, which helped underwrite the evening for the 17th year.

To be sure, the annual fundraising event has become a larger and glitzier spectacle since it moved from Alice Tully Hall at Lincoln Center to the Hammerstein Ballroom in 2016. This year’s notable guests included Oprah — who delighted a surprised audience by presenting Enninful with his award — as well as Cate Blanchett, Tracee Ellis Ross, Caroline Kennedy, Trevor Noah, Claire Danes, Diane Lane, Rosario Dawson and even the YouTube star Gigi Gorgeous.

There were plenty of celebrities on hand for the requisite novelty, but the industry’s own stars commanded the most attention. The community’s close ties were most evident when almost 20 designers paid tribute to Ralph Lauren, who is celebrating the 50th anniversary of his iconic brand, with personal testimonials regarding how he has affected their own careers. Vera Wang, Tommy Hilfiger, Michael Kors, Alexander Wang, Thom Browne, Jeffrey Banks, John Varvatos, Donna Karan, Marcus Wainwright, Jason Wu and Diane von Furstenberg all joined Lauren on stage, while Tory Burch, Carolina Herrera, Marc Jacobs, Norma Kamali, Calvin Klein and Reed Krakoff offered audio soundbites.

“I know what it is to start and I know what it is to enjoy success, and I also know that this industry is not easy,” said Lauren, thanking the CFDA for fostering young talent. “This is not the end, this is the beginning of fashion and so many things that are coming our way.”

The evening’s stars also included Ashley and Mary-Kate Olsen, who were recognised as Accessories Designers of the Year for The Row. “This goes out to everyone who is in this industry,” Mary-Kate Olsen said. "It’s a hard industry and we are really proud to be a part of it.”

Perhaps the most surprising win, however, was Supreme for Menswear Designer of the Year. Founder James Jebbia — who rarely gives interviews or makes public appearances — built a skateboard lifestyle empire from one storefront on Lafayette Street in New York and changed the way shoppers anticipate and covet collections. “I’ve never considered Supreme to be a fashion company, or myself a designer,” he said in his acceptance speech. “But I appreciate the recognition for what we do.”

Sander Lak of Sies Marjan also took home the Swarovski Award for Emerging Talent and Raf Simons won Womenswear Designer of the Year for his work at Calvin Klein, which he nabbed last year as well. 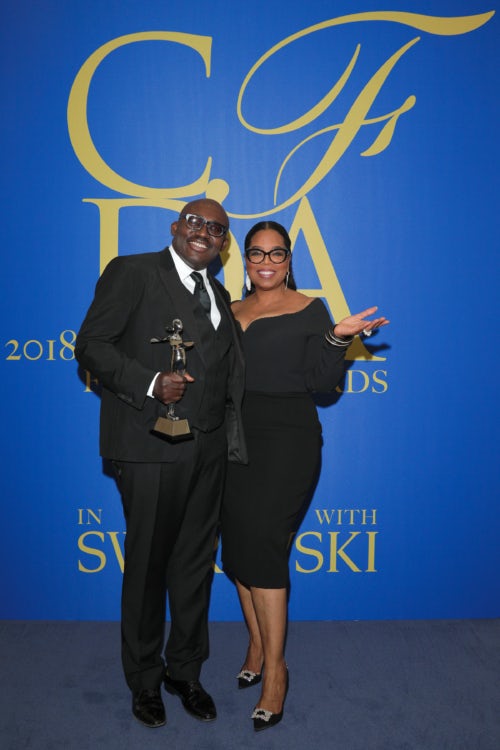 This year, one of the evening’s honourees included the CFDA’s own chairwoman, Diane von Furstenberg, who was presented with the Swarovski Award for Positive Change by Parkland student and gun control advocate Delaney Tarr.

Supermodel Naomi Campbell picked up the Fashion Icon Award, which has been awarded in the past to only Rihanna, Beyonce Knowles, Pharrell Williams and Johnny Depp.

And finally, Kim Kardashian West received the first-ever Influencer Award in recognition of her outsized ability to dictate fashion and beauty trends through social media — she counts a whopping 112 million followers on Instagram alone.

And despite all the sobering talk throughout the evening, Simons ended it all on a high note. “Including in bad times, this country is very inspiring to me. You all are very inspiring to me,” he said. “Fashion lovers love fashion...that’s what keeps us going and what brings us energy.”

Read on for the full list of honourees and winners at the 2018 CFDA Fashion Awards.