TORONTO, Canada — When 20-year-old Vejas Kruszewski won LVMH's Special Prize in June, his label, Vejas, was awarded €150,000 and a year-long mentorship from the LVMH group. The win instantly turned the Toronto-based brand into an in-demand fashion player.

In the months following the win, Vejas attracted stockists including Nordstrom, and revenue grew by 700 percent between 2015 and 2016. But despite recent successes, Kruszewski says he is determined to scale his label in a sustainable way.

“I taught myself how to sew in high school via Youtube videos and through diagrams from Japanese sewing magazines that I would buy online,” the Montréal native tells BoF. The one-off pieces, including t-shirts and leather trousers, would then be sold online to a growing social following.

Kruszewski opened his Toronto studio in 2014, debuting Vejas’ first formal collection later that year. Now closer to New York, trips to the fashion capital became more frequent. “I had some friends in New York and we went back and forth, which culminated in a show in there in February 2015,” he says.

“We didn't have all product categories and I wasn't really showing the full business and market plan. It was more like a project to see what the reaction would be,” says Kruszewski, whose collection was met with acclaim from international press. Orders from Opening Ceremony and a number of boutiques in Japan followed. “Our generation is really defined by a desire for self-examination and construction of self and we're building the brand as a vessel to realise that for ourselves.” 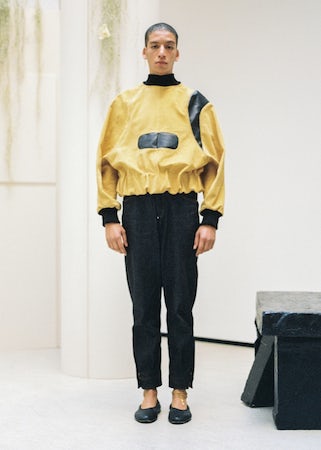 However a lack of team and business structure was limiting for the young designer. “For the first year it was just me. I was doing enough business to sustain myself but there wasn't any investment and I didn't have much capital, so it was quite difficult,” says Kruszewski, who, in early 2015, brought long-time friend Saam Emme into the business to run operations.

“Seeing how Vejas was operating, I came in and set up some infrastructure. He couldn't afford to hire people, so I was overseeing everything from the wholesale to the marketing to account relations,” says Emme.

The brand's biggest breakthrough came in February 2016 when Vejas became one of the 23 brands shortlisted for the prestigious LVMH Prize [one of the industry's most respected awards for emerging designers] turning Kruszewski into the youngest ever nominee in the prize's three-year history.

“It was kind of fortuitous timing. We had just delivered our Spring/Summer 2016 collection to stockists when we were approached by the LVMH Prize,” says Emme, who admits both she and Kruszewski initially wanted to dismiss LVMH's offer.

“At the time, Vejas and I were pretty cautious because we wanted to build the business slowly and organically. We thought it was very early for us to be applying for something like the LVMH Prize,” she explains.

Kruszewski and Emme eventually applied for the prize after being convinced of the magnitude of the opportunity by fashion consultant Julie Gilhart and fashion editor of CR Fashion Book, Ben Perreira — both members of the prize's selection committee — and in June, Vejas was awarded the competition's Special Prize, second to Wales Bonner, which won the main LVMH Prize.

We're starting off with such a great exposure and buyer interest that a lot of brands don't get till they're years down the line.

“I think winning the Special Prize was really a good thing, because it was a bit less attention than the main prize, and I don't think that we would be ready for that kind of attention,” says Kruszewski.

But exposure and momentum from the win has helped catapult the brand forward, says Emme. “We're starting off with such a great exposure and buyer interest that a lot of brands don't get till they're years down the line,” she says. “We didn't have an established business before the prize but the money and the mentorship are really helping us to bootstrap long-term initiatives we already wanted to roll out organically.”

For Spring/Summer 2017, Vejas showed on-schedule at Paris Fashion Week, marking the label’s first major step forward into the established fashion industry. “We're in this unique position that we came into the prize as a very young brand, so for us it's just helped to gain great momentum, exposure and legitimacy and we were able to implement our commercial strategy with the least resistance,” Emme says.

The business is now expanding its presence in its key markets with new stockists in North America, responsible for 67 percent of the company's revenue, and Asia, which accounts for the the remaining 33 percent. Since 2015, Vejas has grown its wholesale accounts from two to 17, among them Nordstrom, Boon the Shop and Opening Ceremony. Wholesale currently accounts for 60 percent of the business' revenue, while the remaining 40 percent is derived from Vejas’ e-commerce site as well as exclusive projects with retailers and artists including Drake. 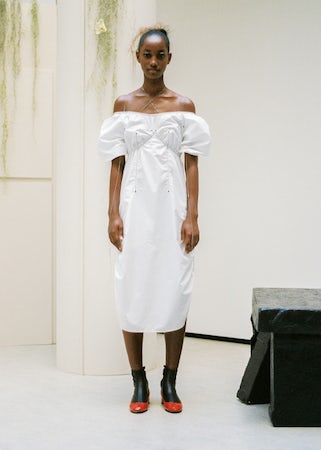 The prize money and mentorship has also allowed for a bigger team, which now includes a full-time studio manager and a pattern grader, as well as interns and seasonal staff who are contracted for sampling and production. “We're still a small team but we're also building a long-term structure in terms of roles that we want to introduce in the near future,” says Emme.

Looking forward, Kruszewski and Emme expect to double revenue season-on-season in 2017. To achieve this growth, they plan to expand into new product categories including knitwear starting next season. Other initiatives include re-launching the Vejas e-commerce site, moving 50 to 70 percent of production from Canada to Italy, and broadening the label’s pricing strategy to make it more accessible to a younger audience.

“A challenge we face is that we sometimes have to compromise in our vision based on a lack of resources. To invest in structures like our supply chain and product categories will allow us to present a more holistic version of the brand,” admits Emme, who says the priority for Vejas is to make sure the business grows in a sustainable way while continuing to resonate with its consumer.

“Starting up a fashion business without outside investment is kind of uncommon and the prize isn't a huge amount of money in the scope of the overhead but it has acted like a catalyst in growing the business,” she says.

“We're coming from a place watching fashion from far away and projecting our hopes and dreams into this industry to now being able to navigate it ourselves.”

How Tibi's Amy Smilovic Crawled Out of the Contemporary Trap