LONDON, United Kingdom — Charlotte Stockdale is struggling to free herself from a gargantuan Sacai coat, replete with tiers of spikey fur. While fumbling with the buckles, she launches into an account of the eureka moment when she decided to be a stylist.

“When I was a model, aged about 18, I remember walking down Via Della Spiga and seeing a [as featured in] Vogue card. I thought: ‘Bloody hell, it’s just a black dress — if that’s all it takes to be a stylist, I should just get on the other side of the camera.’ Obviously ignorance is a very powerful tool!”

For seven years Stockdale has been the in-house stylist at Fendi, the Roman brand owned by LVMH, which, according to Exane BNP Paribas, has annual sales of about $1 billion. Working alongside its creative directors Karl Lagerfeld and Silvia Venturini Fendi, Stockdale has helped inject the 90-year-old fashionable furrier, which dressed Anita Pallenberg in the 1960s, with a healthy dose of pop-culture — be it opening the brand’s Autumn/Winter 2014 show with Cara Delevigne holding a miniature ‘Karlito’ charm, or working with hair stylist Sam McKnight on the fur-Mohawk headpieces of the previous year. “It’s a wonderful amazing moment when you see your cog in the wheel, join up with everyone else’s and suddenly this image starts to form,” she says. 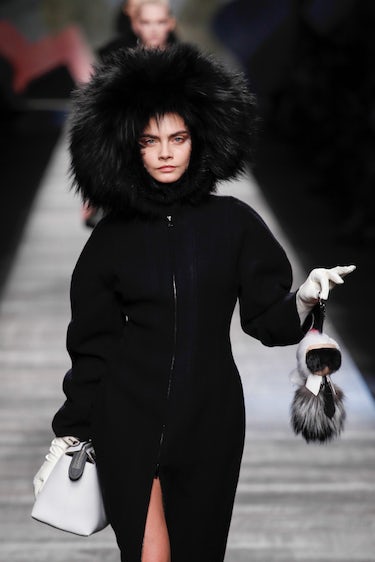 Each year Stockdale spends up to 40 days at the Fendi HQ, working on design, concept and fabric development, castings, fittings and show prep. “Lots of laughter. Lots of swatches on the table,” she says, “Karl is drawing like a demon at all moments. It takes him two seconds — rip — off it floats down the table. It’s his work to have the ideas and somebody else’s to go and flesh it out. He’s just kind of boom, boom, boom, because he’s fun, he’s experimental and he’s clever. Karl has this very sophisticated wit, because he’s basically got a prodigious, if not total recall memory”.

“Karl and Pietro [Beccari, Fendi CEO] are so respectful,” she continues. “They’re both the type of people who want to work with you because of what you do. Therefore you can do what you do, which is really — well, it’s not a given with any house,” she explains. “I like teams: it’s nice when you work together repetitively, because trust is a big enabler of imagination.”

Stockdale is effusive in her praise of the roughly 10-person team she works with at Fendi, which includes Silvia Venturini Fendi and fellow stylist/aristocrat Amanda Harlech. “Amanda is always so funny and flamboyant and poetic, but she’ll walk into a room, up to the board of polaroids we use when we’re putting a show together and she’ll say, simply: ‘You have no ending.’ She’s like a laser,” says Stockdale.

Stockdale describes her role as a stylist at Fendi as “bridging accessories to clothing. What I’m trying to think of is how are they going to work together. What is she going to look like in the end? Who is she?” she explains.

“The direction of Fendi all comes from Karl, we’re all there as implementers — although, obviously, we’re all bringing our voices, thoughts and imaginations to it. Whereas Garage is the opposite end of the scale — we’re all doing it together and so it’s complete freedom,” she continues.

Under the editorial aegis of Garage, the art-cum-fashion bi-annual that Dasha Zhukova launched in 2011, Stockdale has a creative freedom most fashion editors would kill for. As fashion director for the publication, she has morphed Anja Rubik, Cara Delevingne and Binx Walton into Jeff Koons bunnies with Sølve Sundsbø; created holographic covers of Lara Stone, Kendall Jenner and Joan Smalls with Pat McGrath; and shot empty scenes of horror stories, before digitally embedding model-protagonists to appear when scanned with an app, with Nick Knight. 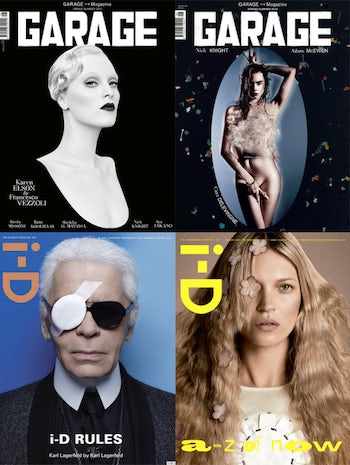 A selection of Stockdale's covers for Garage and i-D | Source: CLM

Upbeat, funny and determined, Stockdale is one half of fashion-tech’s premier power couple. She lives with her husband Marc Newson — the man behind the Apple watch — and their two children, in an apartment in Victoria, London. Newson is arguably the world’s most influential product designer, who has worked with brands including Nike, Taschen, Qantas and Mont Blanc, and the pair are known for hosting candle-lit dinners where you might encounter Jonathan Ive and Carine Roitfeld on the same table.

The daughter of a baronet, Stockdale was educated at Heathfield School (alma mater of Isabella Blow, Tamara Mellon and Sienna Miller) and raised at Hoddington, her family’s 18th century seat in Hampshire. Hers was no nine-to-five household: on trips to London her artist mother would drag her around Yves Saint Laurent, Chanel and Zandra Rhodes. But, even as a child, Stockdale was aware of the pressures of self-employment — watching the lack of constancy in her father’s work as a barrister.

“Barrister’s chambers work in the same way as a creative agency — I grew up knowing that his work wasn’t regular. The problem with being freelance is that you tend to work harder rather than less — but I am very into autonomy. I was always happy pottering around on the fringes, doing what I wanted, whenever I wanted. And I still am,” she continues. Despite her modesty however, Stockdale is far from the industry’s fringes.

Like most stylists at the top of their game Stockdale indulges her creativity by taking on commercial work and believes one inextricably relates to the other: “Editorial in any form, as a freelancer or as a title person, is an extremely important expression of your continued involvement and point of view on the industry for your clients to see.” 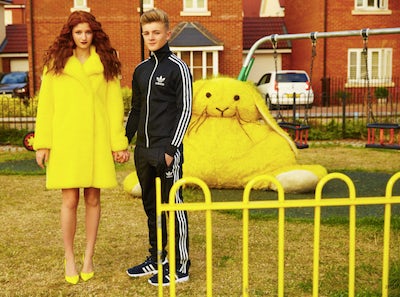 In the late ‘90s, she founded Chaos Fashion, a creative consultancy business. In 2011, she was joined by Katie Lyall, a colleague from British Vogue where Stockdale worked for 10 years as a contributing fashion editor, and later i-D, where Stockdale had been fashion director and Lyall, fashion editor. They moved to Garage together in 2013. The consultancy now has a five-person team that works on projects with Anya Hindmarch, Peter Pilotto, Karl Lagerfeld, Vera Wang and Pepe Jeans. The pair recently branched out into art-direction proper, and are in the process of crafting their first campaign.

Over the course of an impressive 20-year career she has contributed to US, Japanese and German Vogue, Dazed & Confused, The Face and Harper’s Bazaar. She was the stylist of Dolce & Gabbana's shows for 10 seasons, and creative director of Victoria’s Secret show for six years.

“I started off properly by calling a photographer who I’d met in Milan called Ian Crawford. He said — funnily enough — my stylist has just gone off and disappeared somewhere and I’m shooting for the Virgin plane magazine Hot Air. All I thought was printed tear sheets! Printed tear sheets and freedom.” Impressed, Crawford suggested to Stockdale that she meet another stylist he had recently come across who had just founded a magazine: Dazed & Confused.

“I went to meet Katie [Grand] in a pub. It would have been 1994. Then I met Jefferson [Hack] and started working there. I was the Paris correspondent. I didn’t really know what that meant. I was in Paris thinking — are they taking the piss out of me? They were all super cool Saint Martins kids and I just felt like a Sloane.” With her new colleagues, Stockdale both documented and fomented 90s youth culture in the UK and abroad, and she established the first of a number of key relationships that would define her career. 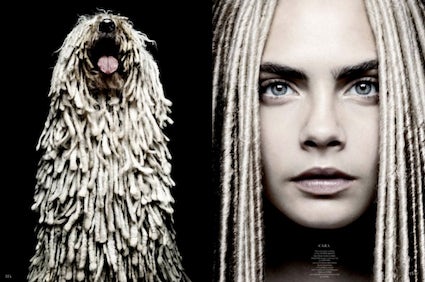 Kim Blake, who, in the early 1990s, headed up the PR for Whistles, a London boutique that at the time was a one-stop shop for Alexander McQueen, was an early supporter. They met when a nervous Stockdale entered the store to borrow clothes on the pretence that she was shooting for Paris Vogue. “She made me write a cheque for a hundred quid and let me take all these clothes. Afterwards Kim said, ‘I really liked you and I thought, I’m going to give her a chance, and if she fucks up, I’m just going to make sure she has no career in this industry.’”

Stockdale still believes that building industry relationships is the first step an aspiring stylist should take. “An in is an in and talent is talent, so roll the dice. Throw yourself out there and use your fear. I used to psych myself up for an hour before I called Kim Blake or Philip Treacy to ask for a hat. I just sat at my little table in my tiny flat with a cup of coffee and thought ‘I have to do this… pick up the phone!’,” she continues.

Despite her desire for autonomy, it is collaboration that truly excites Stockdale. “I just love making images — that’s what it is really about to me. It’s not the parts, it’s the sum of the whole that I love. It gets me up. I was a really lazy motherfucker before I found fashion. I’d sleep until 1pm no problem, but now, I’d get up at 5am or have no sleep just to work.”