Target Teams with ‘Who What Wear’ on Full-Fledged Fashion Line

BoF can exclusively reveal that Target has partnered with Who What Wear to launch a full-fledged clothing and accessories line that the retailer hopes will close the gap between content and commerce and boost the store’s fashion offering.

LOS ANGELES, United States — “We’ve wanted to do a line at Target probably since we started the company in 2006,” says Katherine Power, co-founder and CEO of Los Angeles-based Clique Media Group, whose properties include WhoWhatWear.com, Byrdie.com and MyDomaine.com.

In 2016 — exactly a decade after launching Who What Wear — Power and co-founder Hillary Kerr will get their wish. In the first week of February, Target will introduce a fashion line under the Who What Wear name. The inaugural collection will include nearly 70 pieces, priced from $14.99 to $49.99. Unlike the majority of Target’s designer collaborations, the Who What Wear partnership — a licensing agreement between the big-box retailer and Clique Media Group — will be ongoing, with four seasonal collections, complemented by mini-collections, delivered to 800 Target stores during the first week of each month.

The range will include more than 20 categories, from knit and woven tops to pencil skirts and party dresses. There will also be denim, day dresses, sweaters in multiple silhouettes, jackets, blazers and a complete accessories offering. While not every store will carry the entire range, all items will be available at Target.com and WhoWhatWear.com. Plus-sizes will be available online-only.

The collection marks a series of firsts, both for Clique Media Group and for Target. For Clique, it’s a first try at developing product. For Target, it’s the first time the company has partnered with a media company (instead of a fashion brand) on a clothing line.

As such, the partnership aims to tightly integrate content and commerce, closing the gap between consumer demand generation and transaction. “We’re operating at the intersection of fashion, media and e-commerce,” says Power. Indeed, when Kerr and Power launched Who What Wear as an email newsletter in 2006, their goal was to help consumers shop the looks of their favourite celebrities. “Our idea was to make magazine-quality content, but offer the instant gratification that a magazine can’t,” continues Power. While many fashion publications have struggled to turn readers into shoppers, “the intent of our users is quite different than other sites,” she adds. “We’ve been shoppable since day one, which means our readers are now going on to our search bar to shop.” 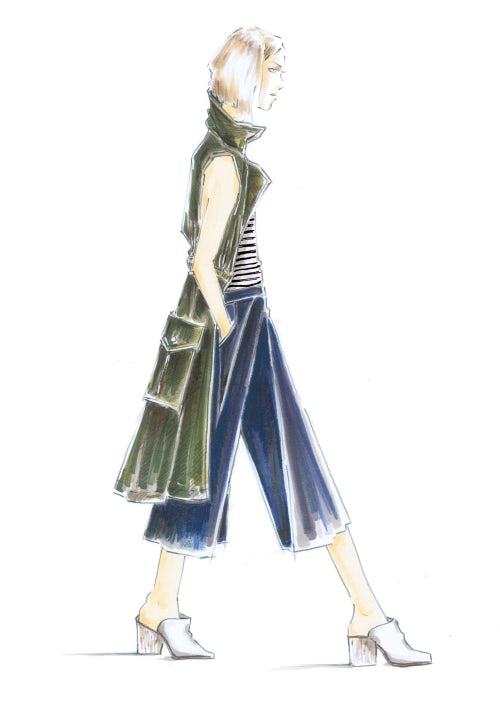 A sketch of Who What Wear's Target collection | Source: Courtesy

Readers who click through Who What Wear’s e-commerce links spend an average of $225. The company’s affiliate marketing revenue nearly doubled in 2014, while traffic has jumped 448 percent over the past year. (About 15 percent of the company’s overall revenue came from affiliates in 2014.)  Much of that growth can be attributed to a “reboot” of the property’s editorial strategy at the beginning of 2014, which included an increase in the volume of daily stories and a greater focus on social media. Clique’s team typically posts about 750 times a day across its platforms, from Twitter to Periscope. Along with 1.2 million newsletter subscribers, the company says it has a total of 12 million monthly unique users — four million at Who What Wear — and 33 million followers on social media. In August 2015, Clique closed an $8 million Series B round of funding with participation from Amazon to help fuel growth.

The co-founders approached Target more than a year ago with an idea to launch a collection inspired by both passive (clicks) and active (comments) reader feedback. “Although we are editorially-led, we are also very data-driven,” Power says. For instance, one of the site’s top-performing affiliate products this year is the pre-knotted belt. “We've already converted sales for approximately 100 units from different retailers at a variety of price points,” Kerr explains, “so we decided to create our very own version.”

Who What Wear’s most-read street-style posts also helped inform what pieces were developed for the Target collection. While the line features classics such as trench coats and linen t-shirts, there are also sleeveless vests and printed pencil skirts that one would expect to see on a fashion insider. “We created everyday essentials and a handful of trend-driven, more directional pieces,” Kerr says. “We want the shopper to be able to mix and match and pair pieces with what they already have in their closet.”

Kerr and Power plan on leveraging the Who What Wear community not only by mining data and asking for reader feedback, but by offering a robust layer of content around the product offering, designed to drive increased sales. “We’ll be talking about different ways you can style the collection,” Kerr says. “Katherine and I have very different personal styles: she favours more tailored and elegant [separates] while I prefer things that are more feminine and vintage inspired. Yet we overlap in the pieces we wear. We really kept that in mind. No one has just one personal style.”

For Target, the launch of the Who What Wear collection signals the retailer is serious about capturing the fashion consumer. Since his appointment in July 2014, chief executive Brian Cornell has brought sweeping changes to Target, adding more stores to urban areas and sharpening its focus on the growing Latino customer base. He has also emphasised the importance of improving its apparel mix. In 2014, apparel made up 19 percent of the company’s $72.6 billion in sales, beaten only by household essentials (25 percent) and food and pet supplies (21 percent).

“Style is a major priority for us,” says Stacia Andersen, Target’s senior vice president of merchandising, apparel and accessories. “It’s one of those categories that we want to be famous for as a company.” Target’s consumer research suggests that the fashion shopper — who is likely coming to Target for other things — is looking for a wider breadth of product than what the store currently offers. “We’re covering a lot of big looks, but there are people who love to shop at Target who don’t see their look,” says Andersen. She also emphasises the importance of newness, something the store’s one-off designer collaborations offer in spurts, but not consistently. The hope is the collaboration with Who What Wear will fill that hole.