NEW YORK, United States — Designer Thakoon Panichgul spent four years in fashion magazines, culminating in a role as a writer at Harper’s Bazaar, before heading off to Parsons to start his design career almost twenty years ago.

Now after a two-year sabbatical following a pause on his Silas Chou-backed namesake label, which is set to return this autumn, Panichgul is launching a personal passion project that sees him dipping back into an editorial role.

Hommegirls, a “platform” for women who shop from men’s departments, launches on Monday with a print magazine (publishing four times a year) and website, which will feature more content, e-commerce links, product recommendations and, later this year, vintage menswear pieces reworked by the designer.

Panichgul wants Hommegirls to educate and inspire women to wear menswear and to be a place where those who are fans can share their inspirations and approaches. The focus is on personal style, not trends. “This is not gender fluidity, per se, this is about women owning their sexuality,” he said. “There are certain nuances about men’s clothes that make you feel cooler and every woman knows what that means.” 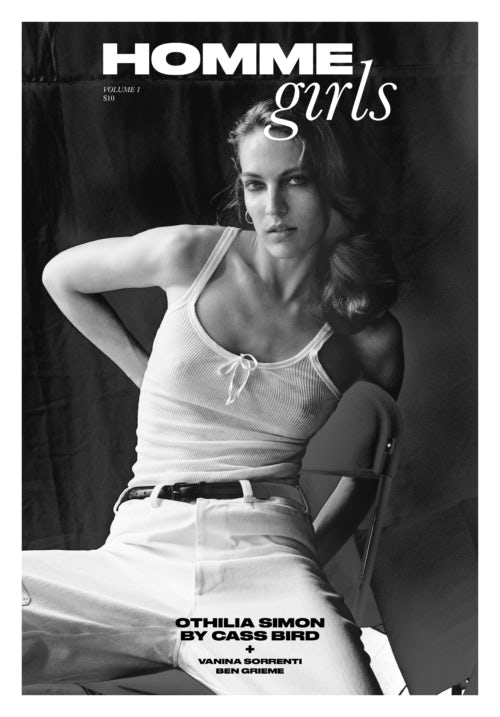 Panichgul has self-funded the project and enlisted friends to collaborate such as photographer Cass Bird, stylist Elissa Santisi and Rachel Chandler of casting agency Midland, all of whom contributed to the first issue, which will be available at limited newsstands in New York and Los Angeles. He plans to highlight emerging labels and stylists as well as established brands. The products and brands featured will range in price, as will the reworked vintage pieces, which he wants to design experimentally.

The business will be sustained through advertising, affiliate links and product sales, but Panichgul said the project’s primary purpose is a creative outlet.

“We are not beholden to a certain time frame for anything or a certain investor,” he said, explaining that he has enlisted friends to collaborate. "I want it to be a place for expression of style and that can only be born from an organic place.”

After launching his namesake line in 2004, Panichgul quickly gained recognition for his wearable, feminine-with-a-twist designs, earning celebrity fans (notably First Lady Michelle Obama) and a runner-up prize at the CFDA/Vogue Fashion Fund in 2006. Two years later, he collaborated with Target. But he recognized the challenges of the wholesale dependent designer model earlier than most and found a partner for a new type of business in billionaire textile mogul Silas Chou. In 2015, an investment vehicle led by Chou’s daughter Vivian acquired a majority stake in the brand and the following year, Thakoon relaunched as a direct-to-consumer, see-now-buy-now designer brand. But Silas Chou announced in March 2017 that the line would pause, explaining that “the business model is ahead of the current retail environment.”

Panichgul said the timing was not right. “I think that fashion as an industry was still going through a lot of transformation especially in the designer market,” he said. “[Chou] only sees success for [Thakoon] and to have the opportunity to pause is something that I cherish.”

Panichgul said Thakoon’s return to market this autumn will operate with a “less is more” approach. “We are focusing on pieces as opposed to collections.” The line will still be available direct-to-consumer only, not tied to seasonal releases, and be more accessibly priced than before.

“For a long time, the word accessible or the word commercial connotates [something negative],” he said. “Accessible doesn't mean that it’s not cool.”

That’s one thing Panichgul realized during his time off from fashion, as well as the value in having multiple creative pursuits. While he has worked with Japanese fine jeweller Tasaki since 2010, Hommegirls is the most significant project he’s taken on outside of his namesake line since it launched.

“There should be different outlets for different sides of you,” he said. “Once I realized that after my sabbatical, the sky opened up. This is the most productive that I've ever been.”