Start Today, which owns the popular fashion marketplace Zozotown, just made its first foray into the US market. But will this unorthodox company manage to connect with consumers outside of Japan?

Start Today, which owns the popular fashion marketplace Zozotown, just made its first foray into the US market. But will this unorthodox company manage to connect with consumers outside of Japan?

TOKYO, Japan — The vast differences between Japanese and American fashion consumers can be boiled down to a matter of inches. Consider this: when Japanese e-commerce behemoth Start Today first launched its social-commerce app Wear in the US in the autumn of 2016, it asked beta users to disclose their height, a strong indicator of clothing size in Japan. But Americans were confused by the query. Why would an app meant for uploading and sharing outfits require this measurement? After all, in a country where people are as physically diverse as the US, height indicates very little when it comes to fit.

“People are very homogeneous in Japan. We tend to wear the same things, the seasonal changes are similar,” says Masahiro Ito, chief executive of Start Today Engineering. “When a look trends in Japan, it trends everywhere. In the US, things are very different.”

Ito runs the development wing of the Japanese company, best known for its popular online fashion concessioner Zozotown, which claims to be the country’s largest fashion e-commerce site. The market capitalisation of Start Today, which also operates Zozoused — a second-hand clothing business — and the Zozo Flea Market, a peer-to-peer selling platform, is $7.6 billion. In its 2016 fiscal year, the company generated net sales of about $544 million, with $1.59 billion of transactions taking place on Zozotown.

Ito, who joined Start Today in 2014 after it acquired his then-14-year-old tech company, has also been tasked with making Wear viable Stateside. While Wear posts link directly to Zozotown product in Japan, thus driving sales, it is simply a social-sharing app in the US, similar to the string of now-defunct fashion apps launched in the early 2010s.

A company of our size needs to look at international growth. Wear is a great way to learn about the US market and the US consumer.

Despite attracting an active and engaged fan base, apps like Fashism, Go Try It On and Pose — which now directs users to Wear within the app — had difficulty getting many users to actually shop and generated little revenue from those who did. Start Today, however, says it’s using its American incarnation of Wear not to drive sales, but instead as a serious research tool, one that will offer insights when it does eventually expand its business beyond Japan.

“The reason we launched in the US — and we’re still in the very early stages — is because Start Today, as of right now, doesn’t have any presence there,” Ito says. “A company of our size needs to look at international growth. Wear is a great way to learn about the US market and the US consumer.”

If the height hiccup is any indication, Start Today has a lot to learn about Western consumers before it begins selling product there. However, the unique culture of the Start Today business indicates a willingness — and ability — to innovate and iterate towards success.

Start Today was founded in 1998 by former rock musician Yusaku Maezawa as a mail-order compact disc and record business; Zozotown was launched in 2004 as what Maezawa calls an “online fashion mall.” Like a department store that operates on a concession model, Zozotown does not invest in inventory, but instead takes a commission on sales from its 3,900 brands, most of which are Japanese. Its wares sit in the low-to-middle segment of the market, with prices in line with those of specialty retailers like J.Crew.

In 2013, Maezawa launched Wear as a new way to drive interest around Japanese brands, which had been supplanted by the growth of international fast-fashion players like H&M and Zara. The idea was to celebrate the idea of kikonashi — the Japanese term for how well you wear something — not necessarily to drive a tremendous volume of sales.

Given the Japanese obsession with street style, creating an online community around the concept seemed like a natural next step. “Kikonashi is something that is very difficult to portray, especially in e-commerce. It’s kind of like a mix tape, if you will,” Ito says. “Wear is a platform for the fashion hobbyist — the fashion enthusiast — to discover brands, new looks, new styles and interesting people. Unlike other social media, it’s really just focused on fashion. It’s a niche, but we think there’s great potential. It’s a service we provide. We don’t see monetisation as a main objective.” While the company declined to disclose number of active users, it said that the app has been downloaded more than 8 million times.

Start Today’s success rests, at least in part, on an unusual company culture. The company employs just over 800 people — half of which are women, uncommon in Japan — and all of which earn the same basic salary and bonus, dependent on profits, a year. The billionaire executive says that it’s about sharing the wealth. “We don't like a competitive environment between employees, and thought this would keep it peaceful in a way,” Maezawa says.

In 2012, in an effort to improve productivity and reduce potential for burnout, the executive also implemented a six-hour workday, which means that everyone is encouraged to complete daily tasks and depart by 3pm. And then there is the Makuhari District housing allowance. Employees living in Makuhari — the neighbourhood in the Tokyo suburb of Chia Prefecture where Maezawa was raised and that is now home to the company’s headquarters — receive a special monthly allowance of 50,000 yen (about $435 at current exchange). The goal with this particular initiative is to help reinvigorate the area’s economy. Currently, 80 percent of employees take advantage of it. 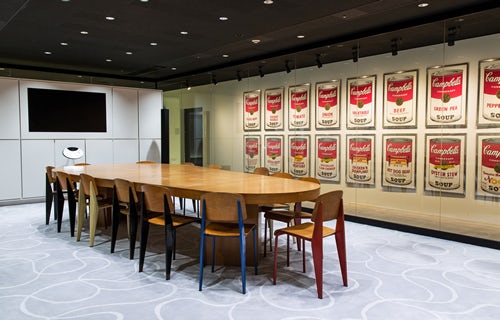 Employees based at Start Today’s main offices in Chiba also get to work amidst Maezawa’s extensive contemporary art collection, which he started building about a decade ago and currently includes Jean-Michel Basquiat’s “Untitled (1982),” for which he paid $57.2 million, and Jeff Koons’ “Lobster,” which cost him $6.9 million. The purchases have earned him more ink in the West than his multi-billion-dollar business.

“The reason I display art in the office is to have the staff feel the art and be thankful about the environment they are working in,” he says. “Art and good furniture are both necessary for our staff to feel comfortable and to concentrate.”

Maezawa’s approach may be unorthodox, but it’s also very much in line with his counterparts in Silicon Valley, who often equate business success with their sense of greater human good. For Maezawa, “The September 11 attacks were a very, very shocking incident for me. Even though it was a tragedy that happened miles away, to people I didn’t personally know, it still felt like I really needed to do something,” he says. “ I came up with the corporate philosophy, ‘Make the world a better place, bring smiles to the world,’ and have stuck with idea ever since.”

Whether or not Start Today’s industrious, art-filled commune will result in smiling American customers remains to be seen. For now, the goal is to collect data by getting people using the Wear app through marketing campaigns and influencer outreach. “Wear is still in its infancy in the US,” Ito says. As for expansion into other Western markets? “If we’re not confident that we can make a compelling product that benefits people, we won’t do it and we won’t release it,” he says. “We use the term ‘user merit’ in Japan — which sounds weird in English. But it means that it has to beneficial to the customer.”