Today, courtesy of our friends at Dazed & Confused we bring you an exclusive interview with Alexander Wang, wunderkind designer at Balenciaga.

PARIS, France — When we meet Alexander Wang in Paris, we dodge a morning so stormy and thunderous that it was “like night” – or so goes the chatter from the French cab driver. But here at 3pm, when the fresh-faced, freshly installed Balenciaga creative director turns up for our rendezvous, the scene couldn’t be any more different. The sun is beating down on the warm stone façade of the brand’s building on Rue Cassette as, inside, the 29-year-old is having his portrait taken by Kacper Kasprzyk. We’re having a proper flaming June moment on the Rive Gauche and life feels good.

Alexander Wang has proved so adept in a hostile climate, someone ought to give him a flak vest and a camera crew. When Nicolas Ghesquière – the visionary who brought the Balenciaga name to the masses over a 15-year tenure – announced he was leaving the house last November, this was fashion’s least wanted job. “How could you follow that?” was the rhetorical question on everybody’s lips. See last February’s debut collection by Wang for a graceful answer. He has long been respected for his own collections in New York (which continue), but here in Paris the blossoming talent put a white rose down the barrel of a loaded gun.

“Of course Balenciaga definitely stands as a national treasure. You know, it’s iconic,” Wang tells us, downplaying his feat while sitting parallel to the showroom’s completely mirrored walls. “When I approached it there were keywords I kept going back to: purity and restraint, and also a sense of austerity and strictness that is very adamant and important. Those are codes that I feel I’ll return to as I continue my journey into working here. I’ll bring myself into it but the first two seasons (womenswear AW13 and resort 2014) really were about paying homage to the archive, going back to the roots and defining what the DNA is.”

There are brilliant myths and images entwined in the (metaphorical) fabric of this house. First of all, its Basque founder, Cristóbal Balenciaga, was a designers’ designer. Coco Chanel softened her sharp tongue to declare: “Balenciaga is a couturier in the truest sense of the word. Only he is capable of cutting material, assembling a creation and sewing it by hand. The others are simply fashion designers.” Christian Dior called him “the master of us all.” Even more intriguing than the adoration was his reclusiveness: Balenciaga was an early blueprint for Martin Margiela, shunning publicity to the point that some French journalists wondered whether he existed at all. Some of his most famous clients, including Marlene Dietrich and a clutch of Rothschilds, are said to have never met him, and this was a couturier – his trade was made-to-measure. 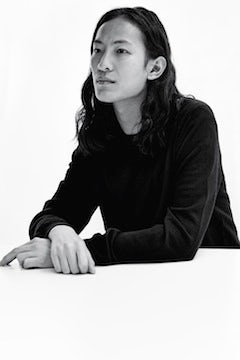 Balenciaga died in 1972 and his passing made the front page of The New York Times. Four years earlier, he’d shut his Avenue George V atelier without warning any of his staff, wanting no part in the style youthquake taking over Paris – the very one that electrified Yves Saint Laurent and propelled him to launch luxury prêt-à-porter in 1966, changing fashion forever. It’s unsurprising, then, that Balenciaga ready-to-wear was only successfully inaugurated in the late 90s and 2000s (after the label was initially resuscitated in 1986), thanks to Ghesquière, who entered through the back door by anonymously designing licensed golfwear and funeral attire (yes, really) for Japan. For the five years before the young Frenchman took the reins and implemented his spectacular science-fiction demi-couture, a blend of art and street, Josephus Thimister held the position. It’s fashion legend that the Belgian was fired after booking Add N to (X) to provide the live soundtrack to a show – the racket was so punishing for bourgeois ears that editors walked out halfway through. What a heroic way to go.

For all the grace and otherworldliness of Balenciaga’s sculpture, there has always been discordance. Perhaps that derives from its creation by a designer who was an uncompromising artist, never mind the fact his work may as well have been from another planet. Cristóbal Balenciaga never entertained notions of expansion – if he had there would be 20 more years to talk about in between, sparing a few cult, discontinued perfumes. It’s really the clothes that tell this story. On body and hanger, their shape remains the same. If you’re looking for a short cut to deciphering the majesty of a Balenciaga look, it’s about the space between the cloth and the woman inside it. These clothes pivot on air – think of the cocoon and bell silhouettes. Pair with sky-high shoes to elongate the figure and add a wardrobe mentality, and a touch of the phenomenal is brought to the archetype of contemporary dressing.

It must be exciting to head a house that’s so reverential. Even the most hyperactive of high-street fashion behemoths has a go at knocking off key styles. “I definitely recognised the imagery before I recognised the name,” Wang comments on the house’s place in the collective subconscious. “When I was a child growing up – whether I’d be seeing it on the cover of books or magazines – you know, it was again the silhouette. Probably the imagery of that one coat that’s almost like an upside-down archway and has the big gazar pinched-shoulder – that was probably the first image I recognised and remembered of his.”

One week a month is the approximate timetable of Wang’s Paris residency, and he’s feeling nourished by the duality of his new existence. “It’s great, and very different to go from being an employer to an employee. I’ve always been very open in saying ‘I love’, I’m very attentive to the business side and I’m very aware – I treat a business as my own. And you know, being at the studio here, understanding the needs of the company and what it’s like to be on that side has enabled me to adapt to an environment and have a different exploration of it. The studio itself and the teams were so welcoming.”


After his appointment, the team took a field-cum-road-trip visit to the Museo Cristóbal Balenciaga in Getaria, the designer’s hometown. “They’d never actually been there,”  he explains. “So we went to see his house and where he grew up and all that. It was a great experience.”

Alexander Wang is wearing black tailored shorts, all-black Chuck Taylors and a black t-shirt, while his communication and marketing teams are immaculately suited and booted. We’re offered a drink, but when Dazed requests eau gazeuse we’re told they only have still – or it’ll have to be champagne. As we’re on best behaviour, still water arrives with an incomprehensibly tiny thimble-like glass. “It’s why I just drink from the bottle,” Wang laughs. In case you couldn’t tell, he is a regular guy. (That’s a total compliment, by the way.)


“Everyone always thinks I have this big gang, but now more so than ever I’m close to the people I’ve known from the beginning and who I’ve grown up with,” he says. “My closest friends are the ones I went to high school or college with – they’re still the same people that I surround myself with and it’s important to have that honesty. They will tell me something when I need them to tell me something. That’s how it is. It’s maybe not as glamorous as some people might want it to be – though of  course I have very special people that support me in the industry who I wouldn’t be here without.”


Wang comes from a family completely unrelated to fashion. “I started sketching shoes and doing fashion illustrations around six or seven years old, though I hardly remember,” he says. “That led to me picking up on fashion magazines. I was self-taught in the sense that no one handed it to me: I discovered it all on my own.”

The campaign is the glamour injection: Kristen McMenamy shot by Steven Klein. Not that you see her face giving it some – the images build on that reverence and, yes, elitism that surround this hardcore five-syllable fashion myth.

“The first eight images that will come out aren’t even showing her face,” he smiles. “She’s either turning around or her head’s cut off or whatever it may be. We liked taking this super supermodel and giving her that perception. She’s such an incredible model and it was so easy to photograph her, we got so much out of it that we weren’t even expecting. There’s a reason she has the reputation. She’s very expressive.”

Check the graphics on that campaign as well as the label sewn inside the new clothes in store – the font has had a subtle adjustment for this new era, although only the real geeks might notice (we did). The first of Alexander Wang’s new concept stores arrives, appropriately enough, in New York’s Soho this autumn. In fashion you pay tribute by moving forward – and here new contexts are being thought of on every level.

“Forever and always I’ll remember that the name on the door is Balenciaga,” Wang says as we wrap up. “I think it’s great to do something that is completely another side of what I do.” With that he’s bounding out the door back to the atelier, where earlier he was shooting the men’s SS14 lookbook. Wang is building steady foundations for a new era – for himself and for Cristóbal.

The full version of this interview, by Dean Mayo Davies, first appeared in the September 2013 issue of Dazed & Confused, a monthly contemporary culture magazine based in London and edited by Tim Noakes.