The Ascent of Officine Generale

Officine Generale, Pierre Mahéo’s much buzzed-about Parisian menswear label, has struck chord with a formula that blends simple aesthetics, high quality, affordable price points and a philosophy rooted in ‘disgust towards the system.’

PARIS, France — The rise of Pierre Mahéo’s much buzzed-about menswear label Officine Generale is clearly a highly personal story. But, at first, Mahéo isn’t particularly talkative. After several silences and sentences started but never finished, he says, very slowly: “You could say this project was born from my disgust towards the system.”

We see factories collapsing, workers dying everyday. Those people work so that you can buy t-shirts at a ridiculously low price. That’s not what Officine Générale is about.

In less than two years, Officine Generale has positioned itself as one of Paris’ most promising menswear brands, with its simple aesthetic, high quality and affordable price points. Toby Bateman, buying director at Mr Porter, was seduced early on: “I like Pierre Mahéo’s ability to mix tailoring and workwear influences to create a laid-back, understated collection that could work for any man’s wardrobe. And the label is competitively priced considering the attention to detail and fabrication.”

Indeed, Officine Generale is performing so well on Mr Porter’s website that the buying team increased its order for Autumn/Winter by 88 percent for the US market and 63 percent for international markets. In January, the brand joined the official Paris Fashion Week schedule, a big step towards recognition and, in June, opened its first retail presence in the city’s chic Saint-Germain-des-Prés neighbourhood. The 750-square-foot space, designed by Mahéo himself — a confessed control-freak — houses the brand’s Autumn/Winter and Spring/Summer collections, alongside 15 “essentials” pieces, which are always in stock and never on sale.

The store opening comes at a time of strong growth for the label. According to Mahéo, Officine Generale is available at 96 points of sale around the world and will turnover €1.9 million in 2014, up 110 percent growth from last year, driven largely by international sales. Ninety percent of the brand’s sales are made outside of France, with the US, the UK and South Korea being the label’s most important markets. 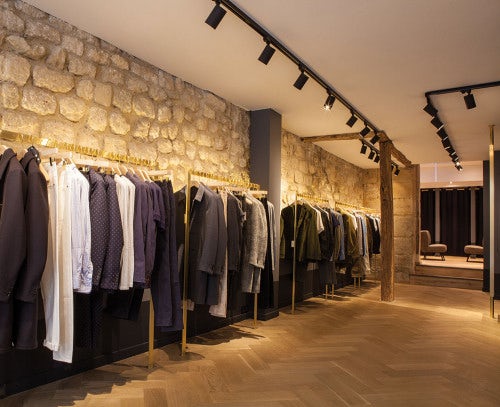 But how did Mahéo do it? His grandfather was a tailor “who would do gardening work in a three-piece suit,” while his father was an oysterman, origins that set the tailoring-meets-workwear template on which the brand is based. Mahéo followed his grandfather’s career path and, in 1998, started working with Parisian tailor Michel Barnes. “I learned many things from him but most importantly I learned how to identify a good fabric.”

After three years, he began working as artistic director, design director and design consultant for several “huge” French menswear brands. “Names I’d rather forget,” he admits. This is where the disgust that has since shaped his label was first born. “I was visiting our factories in China and was horrified by what I was seeing. People were overworked, underpaid, treated like animals, they were not even allowed to look at me when I was walking by!” By June 2011, this disgust had grown to a point of no return and Mahéo quit his job and began thinking about launching his own label.

“The first goal was to do something that pleased me,” he explains. In September of 2012, with a personal investment of €30,000, Officine Generale was born. “The first think I did was to make a list of all the fabrics I wasn’t allowed to use at my previous jobs because they were too expensive and wouldn’t permit a high enough margin.” He decided not to compromise on quality — using materials like Italian cashmere from Loro Piana, Japanese selvedge denim and English tweed — and found production partners who would allow him to deliver his clothes at a reasonable price point. As he explains the decision, Mahéo grabs a shirt in Japanese oxford cloth and lists a number of arguments he used to hear against buying fabrics from Japan, including expense, taxes and shipping and other logistical hurdles.

“If I had stayed on the same thought process as my previous jobs, I would have never done it. Now, this shirt is one of the brand’s best-selling items.” It retails for €190, a high price, he admits. But, from the start, Mahéo was adamant that his brand would be ethical. “Tomorrow, if I decide to send this fabric to China or Bangladesh, I could probably sell the shirt for €130 or €140, but I don’t want to do that anymore. We see factories collapsing, workers dying everyday. Those people work so that you can buy t-shirts at a ridiculously low price. That’s not what Officine Generale is about. It’s about taking your responsibility. You can’t sacrifice all your principles because of competition and margins,” he says, visibly moved.

At the end of the day, I’m convinced the most effective advertising campaign is your product’s quality.

Officine Generale manufactures in Portugal. “I go there often, I see my fabrics, I see the workers, I talk to them, I inspect everything,” says Mahéo. “In all the years I worked with huge brands I gathered a list of contacts, a network of factories mainly in Asia — which I decided to boycott — but also in Europe.” While he was still brainstorming the idea that would become Officine Generale, Mahéo went on a tour of all the factories he knew, with the aim of finding suitable production partners.

“They all adhered to the idea and I’m happy to say that, now, I still work with 90 percent of the people I started with. There is a real human relationship between us. It’s not about me trying to assassinate them, or the factories trying to assassinate me. It’s healthy. They’re my partners. I need their support.” An Officine Generale jacket made from Italian Loro Piana cashmere retails for €550, a wool and viscose-lined overcoat is below €1,000 and washed-up chinos in cotton go for €175. “It’s not about being the least expensive, it’s about being the most right, considering the quality you offer.” When asked what differentiates Officine Générale from the other affordable menswear brands, menswear buyer for Le Bon Marché, Isabelle Fine, doesn’t hesitate before responding: “It’s tailoring work, the elegant allure and most definitely the quality of the fabrics and of the production.” 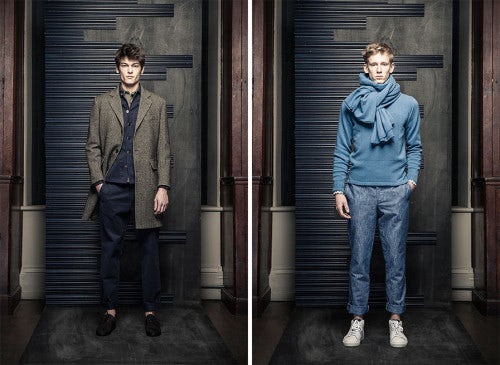 There are the two reasons why Officine Generale is able to offer luxury-level product at an affordable price. The first is low overhead costs. The company is lean to say the least — Officine Générale will hire its fourth employee in October — and is constantly looking for ways to reduce costs. Mahéo currently aims to establish his own distribution centre near the Portuguese factories he uses. “I could ship to stores directly from there, instead of having stuff shipped to Paris, where it’s packed and then re-shipped from France. I’ll save time and money.” The second factor: no marketing expenditure. “At the end of the day, I’m convinced the most effective advertising campaign is your product’s quality. That’s why people will come. Not because of ad pages,” says Mahéo.

In the autumn, Officine Generale will unveil an exclusive capsule collection for Mr Porter and Mahéo is already thinking of opening a second store in Paris before focusing on expansion in the US, “the most important and most promising market right now,” with an “aggressive” plan that will involve the opening of several retail stores. In an enthusiastic email sent from New York a few days ago where Mahéo is attending market week, he writes: “FYI, the results from our sales in the US are completely crazy, it’s actually quite unbelievable! It just confirms my development plan for this market.” But Mahéo admits that further expansion will require additional financing and has been approached by several investors, whose offers he says he is studying. “An agreement should see the light of day before the end of the year,” he says.