NEW YORK, United States — Billionaire tycoon Silas Chou made his name in fashion as an early investor in Tommy Hilfiger and Michael Kors.

His latest bet is on Arielle Charnas, an influencer with 1.2 million Instagram followers but no design experience.

Chou and his Vanterra Capital fund are participating in a $10 million funding round that values the Charnas brand at close to $45 million. Other investors include Harry’s and Warby Parker backer Box Group, M3 Ventures, Silas Capital, Third Kind Ventures and Rent the Runway co-founder Jennifer Fleiss.

The investment is one of the biggest secured by an influencer to date, and indicates that Charnas has ambitions far beyond her licensing agreement with Nordstrom, which expires at the end of the year. The influencer has hired Matt Scanlan, co-founder and chief executive of the cashmere brand Naadam, to turn her Something Navy brand into an independent business. Scanlan will remain at the helm at Naadam.

For now, Something Navy’s chief asset is its founder’s Instagram-famous face. Though Charnas employs a small team that works with her on social media content, Nordstrom has handled the design, manufacturing and logistics involved in the brand’s apparel and accessories lines. 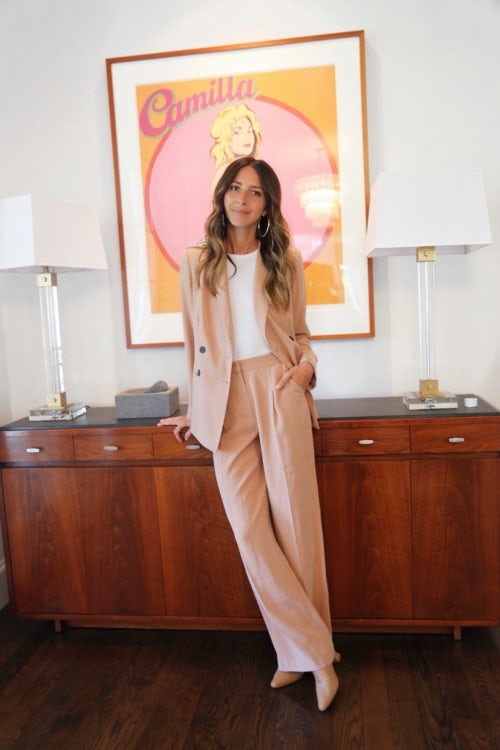 Silas Chou participated in a $10 million round of funding | Source: Courtesy

Those collections have generated big sales for the department store, including $4 million in a single day last September. Shortly after, Nordstrom Co-president Pete Nordstrom called Charnas’ collections the “most successful launches for any brand” at the retailer. Charnas’ final collection with Nordstrom comes out in November. Chou and the other investors are gambling that her personal brand is strong enough to stand on its own.

“She’s not a designer … neither was Ralph Lauren … Calvin Klein … [or] Tommy Hilfiger,” Scanlan said. “These guys were just style merchandising icons. They understood the lifestyle that they wanted to position for people and they had a clear, concise vision of what that looks like and could communicate that.”

Scanlan will hire between 12 and 20 employees in the next 18 months to build a direct-to-consumer “lifestyle brand.” The initial focus will be on apparel, with 10 to 20 “core styles” dropping every 30 to 40 days at the brand’s online shop and, eventually, a network of her own brick-and-mortar stores. Over the next few years, they plan to roll out accessories, home decor, childrenswear and beauty.

In striking out on her own, Charnas is taking on more risk; it will now be her and her investors, not a third-party retailer, who must grapple with design and the complications that inevitably arise at any fledgling e-commerce operation, from cost overruns to production hiccups to the inevitable flop releases. She also won’t be able to rely on Nordstrom’s marketing engine to get the word out about her products.

Charnas’ Instagram account will therefore remain central to the operation. It will act as a platform to crowdsource ideas and present new products, Charnas said. She added that she’ll continue to work with other brands and retailers, though she plans to scale back on the sponsored content.

“I want to make girls that can’t be in the fashion industry and can’t afford runway designs to feel included,” she told BoF.

Even with a loyal fanbase, it’s still a gamble. Charnas is launching her business at a time when many of her fellow influencers are backing businesses ranging from swimsuits to co-working spaces. Meanwhile, consumers bombarded with ads and sponsored content are growing increasingly disenchanted with what they see on social media.

And Charnas herself has attracted controversy as her star has risen. Diet Prada accused Charnas of knocking off designers for her some of her Nordstrom pieces, posting side-by-side photos on the fashion watchdog’s popular Instagram account. The New York Times published an article last week detailing potential harmful effects of posting about one’s children without their permission. Charnas was not named in the story, but took to Instagram to defend putting her family life on public display.

Charnas intends to work with an in-house team to create original designs. She said she won’t copy what comes down the runway but she’ll continue to draw inspiration from “designers and runway and street style.”

The influencer’s evolution into proprietor of a lifestyle brand has potential to succeed, said Lauren Goodsitt, an analyst at Mintel. But assembling a strong team is one of the most important steps in that transition, she said.

“[Fans are] looking at them as more than just, ‘Oh, these are the women who post pretty pictures on social media,’” Goodsitt said. “They’re really becoming brands in and of themselves.”

Still, Charnas said she’s well aware she’ll need to fight the perception that being an Instagram fixture and a businesswoman are mutually exclusive.

“So many people just don’t want influencers to succeed. I mean, they hate influencers,” she said. “It’s really hard to be an influencer and to gain the respect from anyone in the industry, but I think that this is the time that we’re actually going to really show the effect that we have on the customer. We are the future of fashion and the future of retail.”