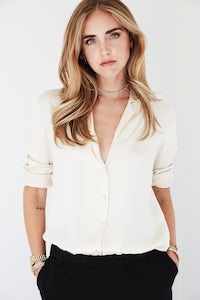 LOS ANGELES, United States — Chiara Ferragni’s stream of selfies has drawn more than 6.5 million followers to her personal Instagram account. But the super-influencer has transformed her digital property The Blonde Salad, which she launched as a personal blog back in 2009 that now attracts an average of 500,000 unique visitors each month, into a full-fledged magazine that relies on plenty more than her outfit photos. “When I started back then, I just wanted a personal space,” says Ferragni, whose movie-star looks and playfully bold Italian style have earned her adoring fans the world over. “But for the last three years, we haven’t been a blog. We’ve been a website.”

Now, the Los Angeles-based Ferragni is taking The Blonde Salad further, launching e-commerce at Shop.theblondesalad.com on September 6. The initiative will feature exclusive, co-branded products created in partnership with the likes of Giuseppe Zanotti, LNA and Delfina Delettrez, as well as MGSM, N° 21 and emerging designers such as Alameda Turquesa and Hannah Beth Fincham. “What you buy on The Blonde Salad is a treat for people who love the website,” she says. “We wanted to do something very special and specific.”

There is also a selection of vintage pieces Ferragni scouted at flea markets in Los Angeles, London and Berlin, as well as items from her namesake shoe collection, which is currently sold at more than 300 stores worldwide. “It’s a big step for us, completely different than what we’ve done so far,” Ferragni says of the channel, which will offer worldwide shipping and be presented in both Italian and English for launch, with more translations coming in 2017.

Of course, Ferragni has learned a few things about retail from launching her shoe collection, which started out as a licensing deal in 2010. In 2013, she raised money to take over ownership of the label, which now generates upwards of $15 million a year in revenue. “It’s a big part of what I do, and I really wanted to do it on my own,” says Ferragni, whose co-founder, Riccardo Pozzoli, has worked with her to develop the brand. “I wanted to create my own team.”

But while the shoe collection — which has now expanded into backpacks, iPhone cases and novelty t-shirts and sweatshirts — is her bread and butter, Ferragni continues to emphasise the importance of editorial, which is a smaller business. While she won’t disclose a specific figure, it’s estimated that The Blonde Salad generates about $2 million in revenue that comes from banner advertising, affiliate marketing and native advertising deals with partners, which, in the past, have included Louis Vuitton and Burberry. However, that figure is likely to receive a boost from the integration of e-commerce.

For the last three years, we haven’t been a blog. We’ve been a website.

Editorially, the site relies less and less on Ferragni’s own posts and more on those of the editors and writers whom she has hired. She has also worked to elevate the status of her sister Valentina Ferragni, along with the “TBS Crew” — a sort of influencer network that helps to embody the online magazine's ethos. The latest redesign also features the first editorial site to use Live Story, a visual commerce tool that helps publishers pull in content from other platforms via a hashtag in order to populate shopable posts. (The Blonde Salad will pull in posts tagged #LiveTBS.) The team will also use the tool as its native-advertising solution, creating hashtags for specific clients that are directed to a branded landing page.

To be sure, building a cast of characters around The Blonde Salad brand is a way to diversify brand partnerships. Valentina Ferragni, for instance, attracts a younger audience. “She’s all about the teenage dream,” Ferragni says of her sister, who has more than 1 million followers on Instagram. “So many brands that I wouldn’t see myself working with are the perfect fit for her.” The TBS Crew, on the other hand, are a collection of 20 micro-influencers, with followings in the thousands. Their profiles are being slowly built to serve different advertising niches, including travel, sport, food and beauty.

Ferragni and Pozzoli have been scrupulous in positioning each cast member, limiting their advertising partners to brands that they believe are a genuinely good match for the editorial content. In a January 2015 Harvard Business School case study of The Blonde Salad’s business, Pozzoli revealed that the company chose to fall short of its 2014 advertising revenue target because it rejected offers from brands that did not align with the editorial message. “Once The Blonde Salad becomes a real lifestyle magazine, we will not be able to scale it without limit and we wouldn’t want that anyway,” he said. “I would like to reach the top where we can have maybe 30 constant partners every year.”

While Ferragni and her team — 90 percent of whom are based in Milan — have carefully plotted the trajectory of The Blonde Salad brand, one thing she doesn’t appear concerned about is the US Federal Trade Commission (FTC)’s crackdown on influencer posts. “Most of the time what I wear is not paid for — it’s my choice,” she says. “And on the website, everything we select is completely not paid. The editors decide.”

Indeed, unlike many of her fellow influencers, the brands she is wearing are rarely tagged on Ferragni's posts and she almost never mentions brands in her captions. It seems that Ferragni believes her success lies in her authentic connection with her audience and the potential for audience growth. After all, while the entrepreneur may now be based in Los Angeles, the US accounts for fewer sales of her shoes than Europe or Asia.