The CFDA Enters Its Tom Ford Era at 2019 Awards

The CFDA Enters Its Tom Ford Era at 2019 Awards

NEW YORK, United States —  "Diane, how did you know I’ve always wanted a torch?” asked Tom Ford, the new chairman of the Council of Fashion Designers of America at the Brooklyn Museum on Monday night.

After 13 years at its helm, Diane von Furstenberg passed her successor a literal torch as a symbol of the end of her tenure as chairwoman of the CFDA in front of the fashion community she fostered for more than a decade.

“It's a little bit like graduating college and going into grad school,” CFDA Chief Executive Steven Kolb told BoF before the ceremony began, since he has worked with von Furstenberg since he joined the CFDA in 2006. “I learned so much from her.”

The Tom Ford era has begun at the CFDA, but he didn’t steal the spotlight on Monday. The focus stayed on von Furstenberg, honourees such as Carine Roitfeld and Jennifer Lopez (both presented by Ford), the industry at large — in transition, challenged by constant changes, but one unified in its passion — and, strangely at one point, Barbie. 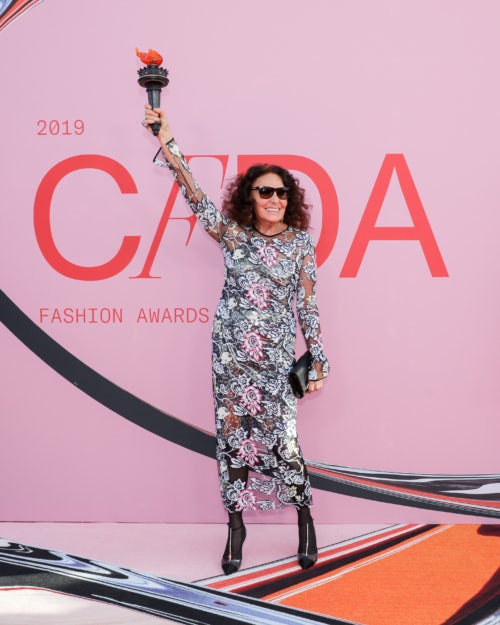 The industry event, which has become a bigger and glitzier affair in recent years, welcomed celebrity guests such as Lopez (with date Alex Rodriguez), presenter Bernadette Peters and Ciara to celebrate established leaders like Sarah Burton and Eileen Fisher, as well as a new generation of talents like Brandon Maxwell and Emily Adams Bode. Rick Owens missed his flight to New York and, consequently, his menswear award. Virgil Abloh had the most nominations but went home empty-handed.

“In this industry, you need people who understand you and won’t try to change you,” said Lopez, honoured with the Fashion Icon award, thanking her stylists, as well as the late makeup and hairstylists Kevyn Aucoin and Oribe Canales. She also thanked Ford, who presented her with the award.

But von Furstenberg’s tribute was a high point of the evening, as the community said goodbye to its fierce, maternal leader. Under her leadership with Kolb, the organisation doubled its membership, acquired the fashion calendar and started numerous initiatives to support the next generations of fashion designers.

“In fashion, it’s all about making a glamorous entrance, but beautiful exits are very important too,” von Furstenberg said after Michael Kors thanked her for building a strong fashion community through the organisation.

“I could not have wished for a better exit, a more glamorous upgrade and a better successor than Tom,” she added.

Ford takes the baton at CFDA during a challenging time for the organisation, as many of its members struggle to modernise their business models amidst the rise of digital technology, globalisation and shifting consumer behaviour.

Financially, the CFDA has taken a hit in recent years, with revenue decreasing since 2016. In 2018, the organisation generated $11.7 million, down from $12.5 million the prior year. Most of its revenue comes from “educational and professional development,” which includes such programs as the CFDA + Lexus Fashion Initiative, the Fashion Future Graduate Showcase and many others.

Kolb told BoF the CFDA is in a strong position to support its members over the long term, thanks to the foundation of funds built under von Furstenberg’s leadership. “When the industry is impacted, so is the organisation,” he said. “We are in a very healthy financial position, because it goes up and down. And we had very major growth over the last 13 years.”

Kolb said that the first priorities under Ford’s tenure will be international expansion and tightening up fashion week. While Ford’s board meeting won’t be held until later this week, he has already started to make his mark on the organisation by pushing to shorten New York Fashion Week to five days and five nights from seven days and eight nights — to make it more accommodating to foreign press and buyers, whose attendance has decreased in recent years.

On stage at the awards, Ford emphasised making the CFDA more internationally minded, adding that the US can feel isolated and inward looking. “I’ve spent most of my career living and working in Europe, but I am an American fashion designer at heart.” 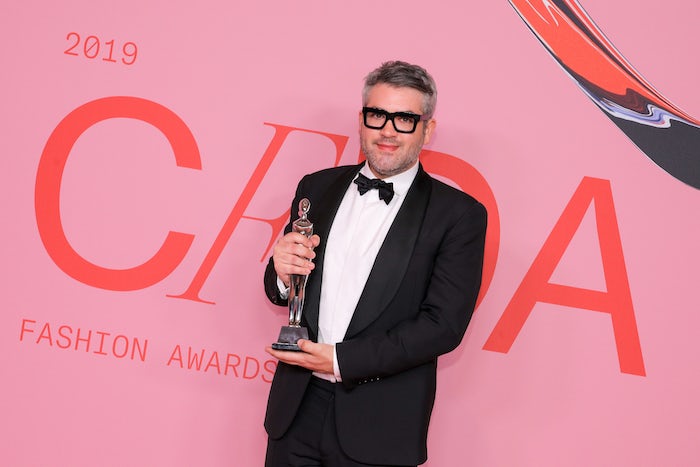 The international theme came through again later when Kolb welcomed Chinese entrepreneur Adrian Cheng, CFDA’s first global ambassador, to the community with a round of applause.

Eileen Fisher was honoured with the positive change award for her work turning reclaimed garments into an economically viable collection of renewed and remade clothing. Fisher encouraged the community to reimagine and reinvent the industry. “I do this for the next generation because it matters,” she said.

Vogue Editor-in-Chief Anna Wintour presented Alexander McQueen’s Sarah Burton with the Valentino Garavani and Giancarlo Giammetti International Award. “In everything she does, Sarah shows that genius and generosity thrive off each other,” said Wintour, who also thanked Burton for designing her daughter’s wedding dress.

And three years after winning the emerging category, a surprised and emotional Maxwell took home the womenswear award.

The recognition came less than a month after he created one of the most memorable moments of the Met Gala red carpet with longtime client Lady Gaga — who took over the carpet in a layered series of gowns.

The Texan native started his career as her stylist and took a leap into fashion by launching his namesake line of glamourous, minimalist eveningwear in 2015.

“I am so proud to be part of an industry like this, where we wake up every day charged with the idea that making a woman feel good, making someone happy, is valid,” he said.

In the menswear category, the winner of the evening was not a new name or streetwear darling, but the beloved Paris-based designer Rick Owens, who throughout his nearly two-decades-long career has never stopped pushing the boundaries in fashion with his otherworldly, humorous and disruptive collections. Owens won the CFDA new talent award in 2002, as well as the Geoffrey Beene Lifetime Achievement Award in 2017.

Ashley and Mary-Kate Olsen, frequently honoured by the CFDA, were once again named accessories designers of the year, the same prize they took home last year.

And finally, Emily Adams Bode was honoured as emerging designer of the year, a menswear designer who has earned acclaim for her one-of-a-kind patchwork and homespun-style pieces made from vintage and deadstock fabrics.

“I’m forever grateful to all the strong women who have helped me launch Bode,” she said. “Thank you for supporting me in my pursuit of American storytelling.”

Later, stylist Lady Amanda Harlech remembered the late Karl Lagerfeld, her longtime collaborator. "His work at best was visual music, sometimes as punctuated as rap, sometimes as mysterious as Shubert.”

Read on for the full list of honorees and winners at the 2019 CFDA Fashion Awards.