LONDON, United Kingdom — Children’s fashion is on the rise. “Back-to-school is not just a time to stock up, but also a time for kids to express themselves. Back-to-school has become their red carpet,” says Andres Dorronsoro, vice president and general manager for Old Navy Kids, which has the third-largest market share of childrenswear brands worldwide. “Kids are more aware of trends than ever before.”

Boosted by the “infiltration of fashion into children’s clothing,” the global children’s market racked up sales of €135.6 billion in 2015, up from €122.1 billion in 2010, according to Bernadette Kissane, an analyst at Euromonitor. And while kid’s clothing only accounts for 12 percent of the overall apparel market, in the last five years, growth in childrenswear has outpaced that of both menswear and womenswear. In 2015, childrenswear sales grew 6 percent, while the men’s and women’s markets each grew 4 percent.

Demographic shifts are one major driver of this growth. In 2014, the birth rate in the United States began to rise again, after dropping every year since 2007. Parents in the US and UK are also having children later in life, when they have more disposable income to spend on bigger wardrobes for their children, or trade up their purchases to higher-end brands.

What we see trending is less about practicality and more about replicas of what is being sold for adults — the little Moncler jackets, the D&G swimsuits.

Meanwhile in Asia Pacific, thanks to aspirational consumption among the booming middle classes and the rapid expansion of international brands like Uniqlo, Adidas, Nike and H&M — all of which are top ten childrenswear brands for market share in the region — the region is now the fastest-growing market for childrenswear worldwide. In 2015, the Asia Pacific childrenswear market was worth €44.1 billion and is projected to reach €65.1 billion by 2020.

The middle of the market is hollowing out, however. ”Similarly to adult clothing, the market is experiencing a level of polarisation that favours both value and designer, leaving mid-tier players — in particular, childrenswear specialists — struggling to regain lost market share," says Kissane. At the high-street level, children’s clothing has begun to imitate adult clothing, as parents’ desire for their children to be “on-trend” has increased and their consumption habits have shifted towards more frequent purchases. 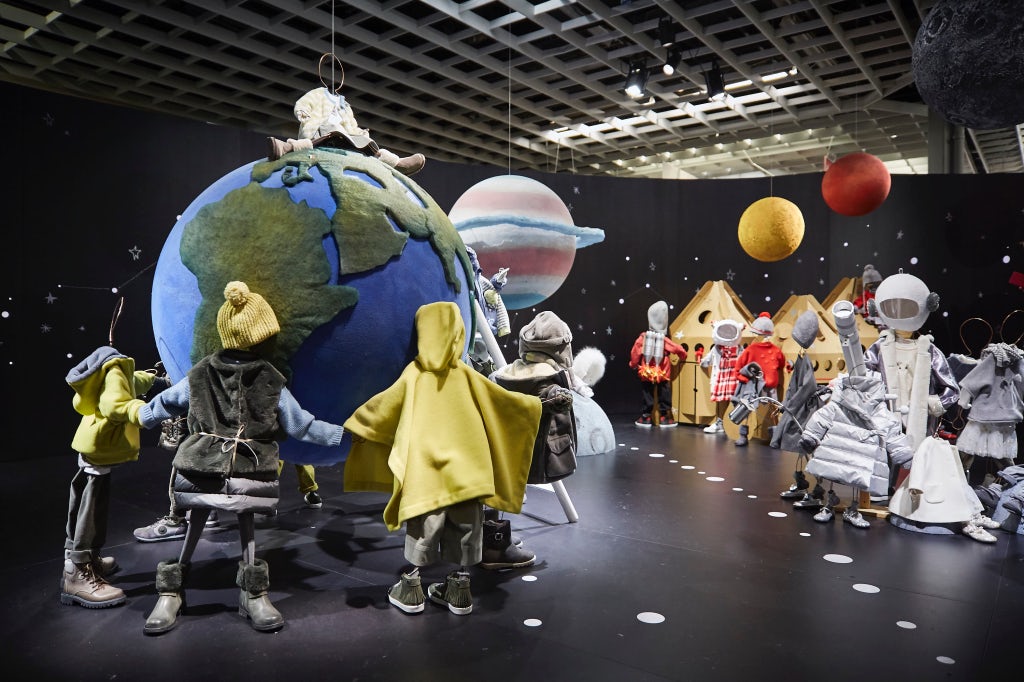 Meanwhile, the luxury end of the childrenswear market is growing, fuelled by older parents in Western markets — who are further along in their careers and thus likely to have a higher disposable income — and increased demand from emerging markets, “where aspirational consumption lends itself well to lavishly spending on children,” says Kissane. Indeed, in China, the government's one-child policy, coupled with increased spending power within households and parents' desire to give their children benefits the previous generation lacked, has given rise to "Little Emperor syndrome", a term coined to describe the tendency of Chinese households to spend heavily on only children.

In the late 2000s and early 2010s, a flurry of designer brands, including Marc Jacobs, Stella McCartney, Lanvin, Gucci, Fendi, Dolce & Gabbana and Roksanda, jumped to tap this trend, launching their first forays into the childrenswear market. While some brands — such as Vince and Tommy Hilfiger — operate children’s labels via licensing agreements, many are made in-house and correspond closely to a designer’s women’s and men’s collections, playing into the desire for “mini me” outfits where parents and children dress the same.

“I realised how much moms enjoy buying dresses for their daughters. It’s a different perception in buying for your daughter than buying for yourself — you would indulge in her much more than you would yourself,” says London-based designer Roksanda Ilincic,who  launched Blossom, a line of girls’ clothing which features many of the fabrics, bright colours and motifs used in her women’s collections in 2012. “I also felt the market was lacking a bit of fun… that things for kids were either too pink or too perfect,” she continues.

According to Candice Fragis, buying & merchandising director at Farfetch, which launched its childrenswear division in March, Burberry, Moncler and Dolce & Gabbana are amongst the top-selling labels in both women’s and children’s. “We’ve seen that kidswear has been an add-on to a lot of the purchasing that’s done by both men and women,” she says. “What we see trending is less about practicality and more about replicas of what is being sold for adults — the little Moncler jackets, the D&G swimsuits.”

Increasingly, children’s fashion also has a place on social media, giving rise to influencers like Farouk James, a four-year-old childrenswear model. Indeed, Burberry has had success with the “mini me” approach and offers children’s versions of the trench coats, checked scarves and lace dresses from its main collections. The brand transitioned its childrenswear business in Europe from a license to a direct operation at the end of 2015, in which year childrenswear grew 15 percent to make up 4 percent of overall revenue, or £91 million — the company's fastest-growing product division that year.

“Our customers gravitate towards brands for their kids that they personally might wear,” adds Tom Kalenderian, executive vice president and general merchandising manager of Men's and Chelsea Passage at Barneys New York, where Stella McCartney, Dolce & Gabbana, Sonia Rykiel and Moncler are among the top-selling children’s labels. 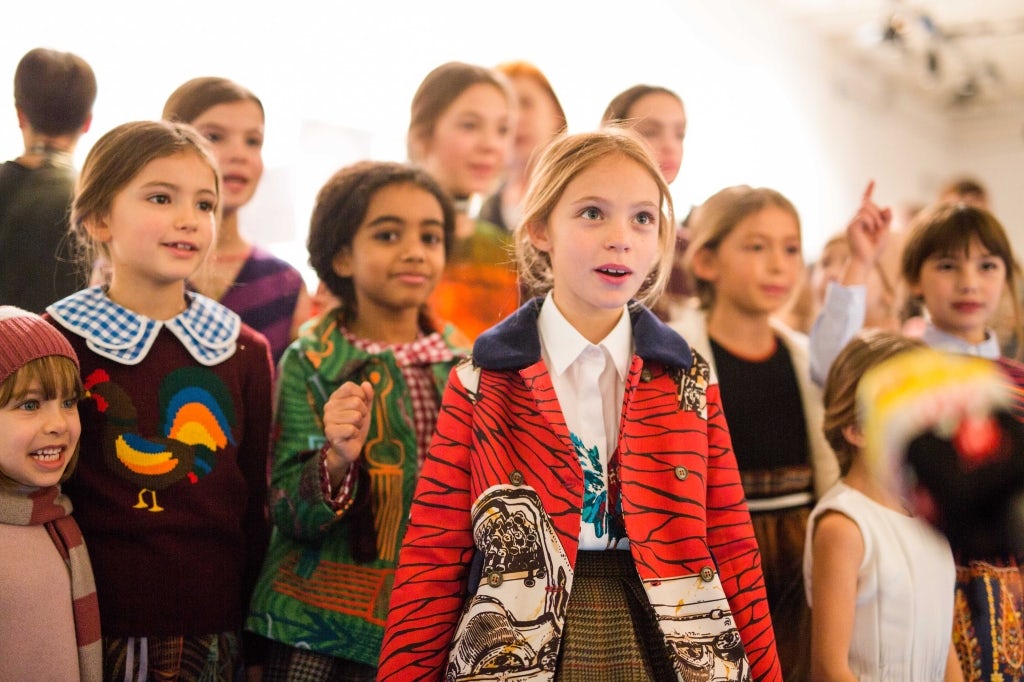 Children’s clothing has also followed recent trends in men’s and women’s fashion, which prioritise comfort and performance. “Athleisure is important,” says Kalenderian. “Most kids probably are not going to the gym or yoga, but mirror the parents’ way of dressing.” He also attributes an uptick in comfy, on-trend knit bottoms in drop crotch and harem silhouettes for boys, to parents wanting their kids to look as hip as them.

“Activewear is particularly relevant for kids. Kids need clothes that are both fashionable and functional to hold up to their active lifestyle,” agrees Andres Dorronsoro of Old Navy Kids. The increased use of stretch denim and “jeggings” among women has also trickled down to childrenswear, by enabling children to wear more comfortable, softer denim styles.

“With kids it’s all about comfort,” concurs Roksanda Ilincic. “You can’t have a fabric that is itchy or a dress with a lining that isn’t nice enough, it just doesn’t work to mix natural fabrics with man made fabrics,” she says.

Increasingly, children’s fashion also has a place on social media, giving rise to influencers like Farouk James, a four-year-old childrenswear model known for his large afro, whose Instagram account (run by him mum) has racked up 119,000 followers, as well as childrenswear bloggers and brands like Courtney Adamo (176,000 followers) and Julia Restoin Roitfeld (255,000 followers), daughter of Carine Roitfeld and founder of childrenswear brand Romy and the Bunnies.

And with children joining social media at an earlier age than ever before, pre-teens are themselves more aware of trends. Fitness brand Athleta is betting on this, and this summer will launch Athleta Girl, a new line of about 60 styles for girls aged six to 14, comprising performancewear which can be worn for sport, school or play. “A girls’ line is something our customers have been asking for — girls today want to dress sporty. They are living more active lives,” says Nancy Green, president and general manager of Athleta, which is a division of Gap Inc.

Another key driver of trends in children’s fashion is celebrity offspring, who are increasingly becoming fashion icons at an early age — from North West to Prince George, Princess Charlotte to Blue Ivy. “Children are important influencers today,” says Tom Kalenderian at Barneys. When Shiloh Jolie-Pitt was born, Barneys sold out of the t-shirt she wore on the cover of People magazine.

“We try not to chase our tails with the item of the moment, but we are impacted by celebrity babies,” adds Mary Elise McGowan, divisional merchandise manager for intimate, hosiery and kids at Neiman Marcus. “We have definitely seen an increase in demand for classic looks since Prince George and Princess Charlotte have been photographed wearing very traditional looks.”

John Lewis, too, is experiencing a royal baby sales boost. Last year, the retailer reported that Prince George’s traditional outfits had led to increased sales of boy’s navy knitted jumpers by 69 percent, and a 447 percent uptick in enquiries for similar items when he was picture wearing a quilted jacket for his first day at school.

Meanwhile, the e-commerce market for childrenswear is heating up — especially in the premium segment. Last year, Swedish e-commerce retailer Babyshop acquired its competitor AlexandAlexa to form The Luxury Kids Group, a premium children’s etailer expected to turnover €40 million next year.

Leading luxury e-tailers are also making strides into the market. Since launching in March, Farfetch’s childrenswear division has grown from 9 brands and 19 boutiques to nearly 70 brands and 30 boutiques. “The goal is to attract the same level of boutiques we always have [for adultswear] — but for kidswear,” says Candice Fragis, buying & merchandising director at the company. Additionally, in2013, Net-A-Porter's Alison Loehnis confirmed the company had registered the domain petite-a-porter.com and "will explore kids.”

Cécile Roederer founded Smallable, a French concept e-tailer for childrenswear, toys and home décor (which also operates a physical concept store in Paris), which sells almost 500 brands including Stella McCartney Kids, Munsterkids and Milk on the Rocks seven years ago. Last year, the business turned over €20 million with 60 percent of sales from international markets.

“When I started, there were not so many brands for children. It was a few, and we really needed to search for them, it was frustrating,” she recalls. E-commerce, as well as working well for time-poor parents, by enabling them to get everything they need in one place, without leaving the house, has also prompted a great desire for discovery among parents shopping for childrenswear brands, and sparked a shift in purchasing habits. “During the past few years, there has been a decrease of brands with big logos — big multinational brands. Especially because emerging countries like China, Russia, don’t want logo luxury any more. They want the product more than the brand. For us, there has been a move towards emerging designers’ products.