LONDON, United Kingdom — Cara Delevingne worked the room in a tailored black trouser suit and slicked blonde hair taking selfies with guests and posing with model friend Jourdan Dunn on the silk sheets of a bed atop a disco-lit dance floor. It made for an Instagram-ready scene for the influencer crowd whom the 26-year-old model and actor had invited to a townhouse on Grosvenor Square to celebrate the launch of Burberry’s new fragrance, Her, of which she is the face.

Staged on Wednesday night, the launch event came less than a month after new chief creative officer Riccardo Tisci formally unveiled his vision for what he has called #newera Burberry. The runway debut, where refined elegance was paired with nods to streetwear, came soon after the opening of a luxurious new London flagship and the release of a new logo and monogram — all a reflection of Tisci’s response to chief executive Marco Gobbetti’s stated strategy to push Burberry further upmarket and reposition it as a true luxury player like European rivals Gucci and others.

And yet the new fragrance is fronted by a model favoured by previous creative head Christopher Bailey and comes packaged in a girlish, pink bottle that feels out of step with Burberry’s new strategy. “The styling of the bottle and the advertising campaign and launch does seem to be slightly out of sync with Marco Gobbetti and Tisci’s skew on the brand,” agreed John Guy, head luxury analyst at Mainfirst Bank. 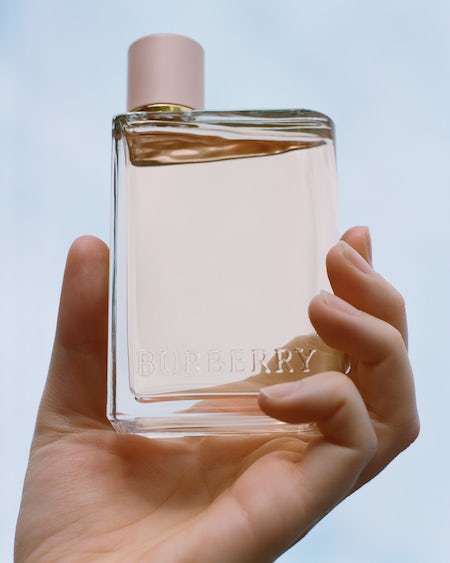 The fragrance launch is Burberry’s first since Gobbetti, who joined the company in 2017, reversed course on its decision to take its beauty business in-house and inked a licensing deal with Coty. Under the terms of the deal, Burberry oversees “creative elements” while Coty — the third-largest global cosmetics group, which also has fragrance partnerships with Gucci, Marc Jacobs, Calvin Klein and others — uses its global distribution muscle to market and sell the range.

Burberry’s move to once again license its beauty division was welcomed by analysts. (Before taking the business in-house the company worked with Inter Parfums). “Beauty is a business where you win on global reach and local scale and Burberry was a dwarf in a land of giants,” said Luca Solca, head of luxury goods at Exane BNP Paribas, when the move was first announced in April 2017.

The £180 million deal — which gave Coty the exclusive licence to sell Burberry beauty and fragrance products — was a boon for Coty. Same-store sales in its luxury division climbed 6 percent last year driven by Gucci Bloom and Tiffany fragrances. Still, momentum in the overall fragrance market is underwhelming. Global sales expanded just 3 percent last year to $11 billion, according to NPD. While artisanal and niche brands are growing faster than the wider market, ahead 14 percent last year in the US, designer branded perfume is still the biggest category in total revenue terms.

Beauty licensing is the norm for many designer brands: a smart and relatively easy way to tap large numbers of customers with entry-level price points without having to acquire the expertise and distribution heft to manufacture and market fragrance.

The presence of Coty chief executive Camillo Pane at the launch party for Burberry’s latest fragrance is testament to the financial importance of the deal. Analysts estimate Burberry cosmetic and fragrances sales are worth around £200 million.

But fragrances are also a critical communications touchpoint for millions of consumers — Her is available at tax-free airport counters, Boots pharmacies and department stores from Debenhams to Macy’s — and must capture and convey the authentic essence of a brand as well as providing an easy source of revenue.

The campaign’s dedication to London nods to Burberry heritage, but Tisci’s Burberry is less apparent.

For its Burberry launch, Coty has relied on a tried-and-tested marketing formula that unites a famous model, Cara; a famous photographer, Juergen Teller; and a famous backdrop, London. At the party, a neon pink light spelt out, in a Tracey Emin-style script, lyrics from the ditty a trench coat-clad Delevingne sings in the advertising campaign: “Maybe it’s because I’m a Londoner.”

The fragrance itself, which is fruity with a musk and dry amber base, retails for £96 pounds for a 100ml eau de parfum, sitting comfortably alongside Chanel’s £116 Gabrielle eau de parfum and Joy by Dior eau de parfum, which sells for £110. And yet the creative dissonance with Tisci’s Burberry is clear.

“Scent-wise this is a classic Coty fragrance — a floral fruity gourmand crowd pleaser that will resonate with consumers. The campaign’s dedication to London nods to Burberry heritage, but Tisci’s Burberry is less apparent,” said Lisa Payne, senior beauty editor at Stylus. 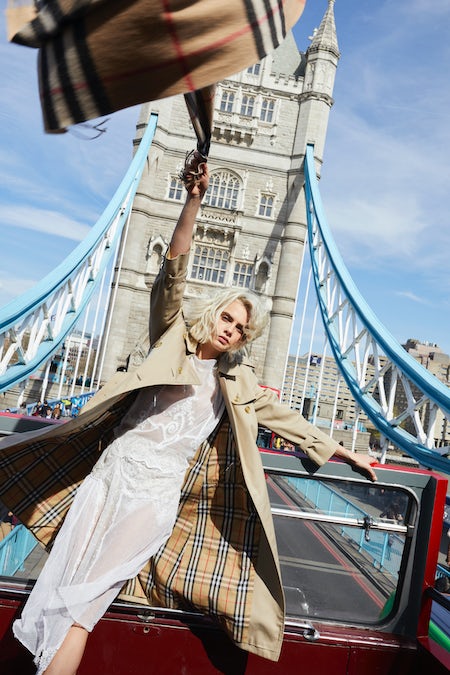 The disconnect reflects the reality that Her has been in development for a long time, underscoring the difficulty of synchronising product development cycles for fragrance and fashion, especially when a new designer joins a brand. Sources close to Coty say planning for the Her fragrance was started well before Tisci joined Burberry. Most big perfumes take a minimum of 18 months to two years from inception to launch, said one insider. It takes about three months to develop a “juice” but stability, safety and regulation tests; packaging design and development; and marketing take up the rest.

“Her was in the works before Tisci’s appointment,” said Payne. “Her is most likely to be the last of the old Burberry. For the next fragrance launch we can expect Tisci’s influence to come through more heavily, with classic Burberry heritage meeting the creative director’s own distinct take on luxury and dark glamour.”

But for now, Burberry has to contend with mixed messages in the marketplace.

"When you do a reposition of the brand, it’s a complex exercise. The relationship with Coty started before the strategy was amended. You can make some adjustments, but the launch of a perfume is a big thing you start well in advance,” explained Mario Ortelli, managing partner of luxury advisors Ortelli & Co. “Burberry is implementing a very important change programme; all the pieces will converge but not at the same speed.”

Neither Tisci nor Gobbetti attended the London launch of Her, and while Burberry’s official Instagram account has promoted the fragrance to its 12.4 million followers, it was largely absent from Tisci’s own account, which the designer has often used to tease new developments at Burberry, save for a fleeting Instagram Stories post of Cara Delevingne at the launch party. The brand declined to comment for this story and Coty declined to be interviewed.

"It’s a transition year and it’s a legacy launch,” concluded Mainfirst’s Guy, “but from an execution standpoint, as Burberry has creative control with Coty, they could have done a better job."

Editor's Note: This article was revised on 15 October, 2018. A previous version of this article said Coty’s revenue performance in the luxury division fell 1 percent last year. This is incorrect. Coty revenue’s climbed 6 percent on a same-store basis in fiscal 2018.